Home > News > Spain extends state of emergency through May 9 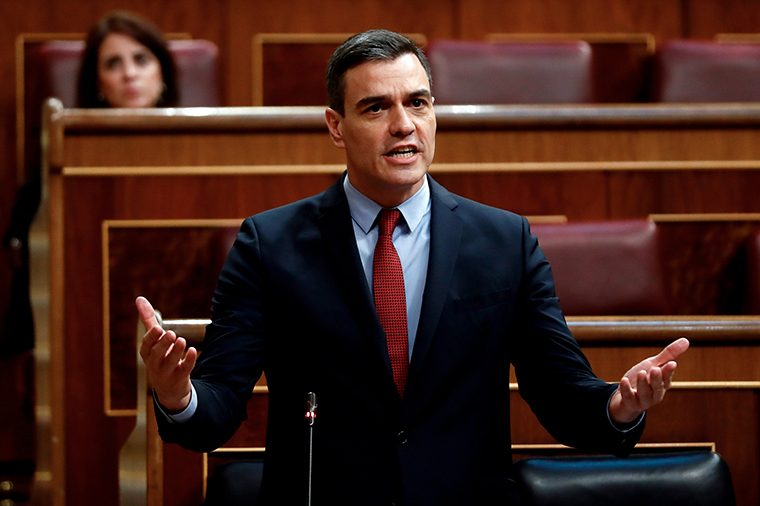 Spanish Prime Minister Pedro Sanchez delivers a speech during a session at the Lower Chamber of the Spanish Parliament in Madrid on April 22, 2020. - Spain has suffered the world's third-most deadly outbreak of the coronavirus, which has so far killed 21,282 people with the government twice extending the lockdown in a bid to slow the spread of the epidemic. Parliament is expected to approve another extension until May 9. (Photo by Sebastian MARISCAL / various sources / AFP) (Photo by SEBASTIAN MARISCAL/EFE/AFP via Getty Images)
Coronavirus, Europe, News

The Spanish parliament voted to approve the extension of its state of emergency proclamation for the third time until May 9.

The state of emergency was first decreed on March 14, which ordered severe restrictions on movement and business.

Spain’s Prime Minister Pedro Sanchez argued for another extension during a speech on Wednesday morning.

“This extension is different than the others” Sanchez said. “It’s the first time I can do this with a carefully optimistic future. It is [the extension] that will begin to de-escalate the rules of confinement”, he added.
Sanchez warned parliament members that the next phase of de-escalation and the return to normality “needs to be slow, gradual and therefore secure.”

The prime minister also mentioned that his government is “implementing a control system” for people traveling from inside or outside of Spain “to avoid more imported contagions.”

“Each mistake we do now, each challenge we fail, each delay caused by other interests will be a weight we will carry in the next months and years,” he added.

Spain has the world’s second highest cases of coronavirus cases, the country has enforced Europe’s strictest restrictions of movement.