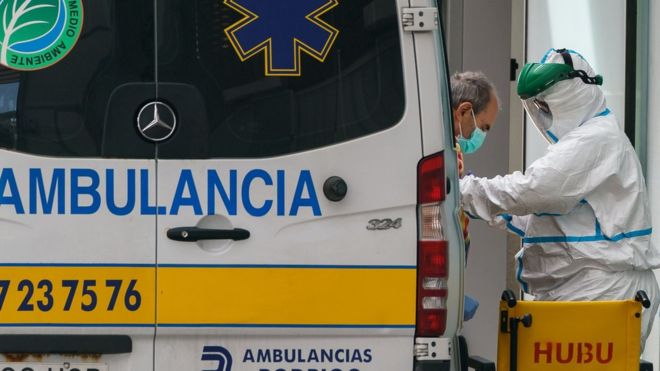 The coronavirus death toll in Spain has jumped by 514 in a single day, as the situation in the country quickly worsens.

Official figures show that 2,696 people have now died in the country and close to 40,000 are infected.

About 5,400 health care workers are among those confirmed cases.

Spain is the worst affected country in Europe after Italy, which has recorded more than 6,000 deaths so far.

What’s the latest in Spain?
While cases have been mostly concentrated in Madrid, Catalonia and the Basque Country, infection numbers are growing in other regions.

Castilia-La Mancha and Castilla y Leon, which border the capital, have seen a big jump in cases. Both regions have large elderly populations.

The police criticised “irresponsible people” on Tuesday, including some who have left hospitals without being formally discharged.

In the capital Madrid, meanwhile, the municipal funeral home has stopped collecting Covid-19 victims because of a lack of protective equipment.

The city is to use a major ice rink, the Palacio de Hielo (Ice Palace), as a temporary mortuary where bodies will be stored until funeral homes can collect them, officials told Spanish media.

The images are sobering – hearses bringing coffins of the dead to a large municipal ice rink in Madrid.

Mortuaries, as well as hospitals, are overwhelmed. Though the daily tally of dead has worsened remorselessly, there might be one crumb of comfort — the rate of rise has slowed for the last three days consecutively. 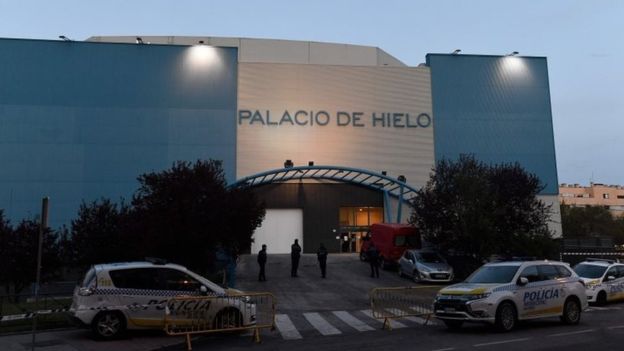 The military is helping transport patients, to ease the burden on hospitals where doctors and nurses are worked to exhaustion.

But the number of cases continues to rise alarmingly – amid fears about the spread of the disease countrywide.

Spain’s latest figures come after soldiers helping to combat the outbreak found retirement home patients abandoned and even dead in their beds on Monday.

The defence ministry said that staff at some care homes had left after the coronavirus was detected. Prosecutors have launched an official investigation.

Prime Minister Pedro Sanchez has said he will ask parliament to approve a further extension of lockdown measures until 11 April amid the worsening crisis.

“I know that it is very uncomfortable to be confined until 11 April, and that it is affecting everyone. But experts agree that it is an effective measure in the fight against the coronavirus,” he told a meeting of regional leaders.

What about elsewhere?
Coronavirus has been spreading rapidly across the globe, affecting more than 160 countries and claiming more than 16,000 lives.

Italy is currently the worst affected nation, with more than 6,000 reported dead. The rate of infection has seemingly slowed there in the last few days, although this is by no means a sign that the outbreak is under control.

Angelo Borrelli, Italy’s civil protection chief, told newspaper La Repubblica on Tuesday it was “credible” to estimate the numbers of infected are 10 times higher in reality.

“In the next few hours… we will see if the growth curve is really flattening,” he told the paper.

The World Health Organization (WHO) has warned that the coronavirus disease pandemic is “accelerating”, although Director General Tedros Adhanom Ghebreyesus said it was still possible to “change the trajectory”.

He has urged countries to adopt rigorous testing and contact-tracing strategies.