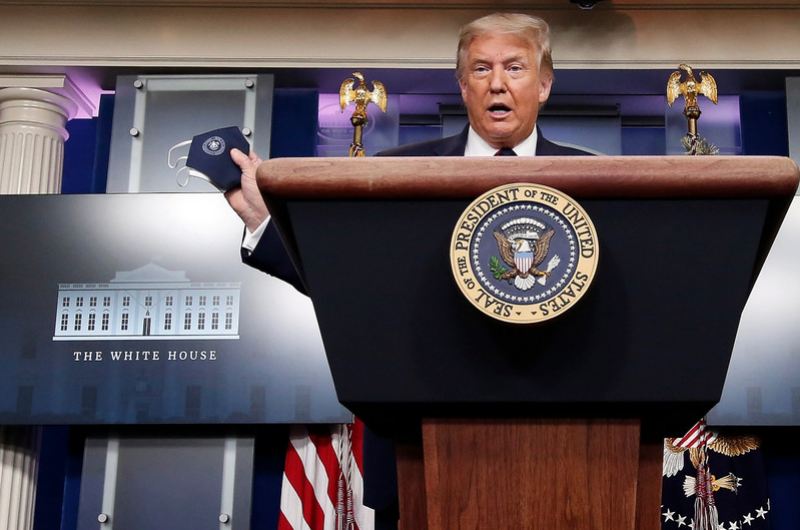 A month ago, he insisted the novel coronavirus was “dying out” in the U.S. As the pandemic overwhelmed huge swaths of the nation, he maintained the threat was “fading away.” Health officials across the nation begged him for more attention on the widening health crisis — and he wanted little to do with them.

On Tuesday, President Donald Trump flipped his script with a grim new assessment of the global pandemic — and at last applied an approach that aides implored him to take earlier in his pandemic response.

Compared to previous disorderly spectacles that sometimes exceeded two hours, Trump’s appearance at a White House lectern on Tuesday hinted that significant changes are underway as he and his aides refocus their attention on the No. 1 threat standing between them and a second term. The format of the briefing — a mostly scripted, solo Trump — also suggested a detente was reached among opposing White House factions that spent the past few weeks clashing over the role their embattled boss should play in responding to the alarming resurgence of Covid-19 in southern and southwestern states.

A senior administration official said Trump’s relatively disciplined performance was likely to neutralize objections that some aides had raised in recent days over allowing him to participate in televised coronavirus updates. White House chief of staff Mark Meadows, along with senior adviser Jared Kushner and top officials on the president’s reelection campaign, had previously urged him to tether his reelection message to the economy and other issues instead of constantly dwelling on the deadly virus.

Instead, after weeks of pressuring schools to commit to reopening and touting his plan to reboot the U.S. economy, Trump vowed on Tuesday to pursue a “very powerful strategy” to contain the virus and ensure rapid distribution of the first available vaccine. Despite some Trumpian flourishes — he repeatedly referred to it as the “China virus” and claimed other countries are begging the U.S. for assistance — the president managed to stick to the subject matter at hand, warning that the spike in cases “will probably, unfortunately, get worse before it gets better,” and encouraging young Americans to avoid bars and wear protective masks when necessary.

It was a message even his strongest supporters were hoping to see after weeks of watching Trump dodge or downplay a threat that’s consuming states critical to his reelection in just over 100 days.

“President Trump provided an important reality check about Covid-19,” said Alfredo Ortiz, chief executive of the Job Creators Network and a member of the president’s “Latinos for Trump” campaign coalition, in a statement following the briefing.

Trump’s renewed participation in updates on the virus came as his administration grapples with a Covid-19 resurgence that has eroded months of progress, and increased demands from state officials for a straightforward national strategy. Since Trump’s last appearance at a briefing for the coronavirus task force in late April, confirmed cases of the deadly virus have increased nearly fourfold in the U.S. while deaths have surpassed 140,000.

Initially, Trump dismissed the alarming case spikes as the result of increased testing. As hospitalization rates ticked upward in numerous states earlier this month, he claimed during a July 4 speech that “99 percent” of Covid-19 infections are “totally harmless” — a statement that roiled some members of the administration’s own task force and ran counter to scientific evidence suggesting more serious risks. But a shift in rhetoric among prominent Republicans, along with pressure from Vice President Mike Pence and top health officials, forced Trump and his inner circle to reevaluate their approach to the coronavirus messaging.

“The China virus is a vicious and dangerous illness,” Trump said Tuesday, joined only by his press secretary and a dozen reporters in the briefing room. “Some areas of our country are doing well; others are doing less well.”

“My administration will stop at nothing to save lives and shield the vulnerable, which is so important,” he added.

Rather than limiting his engagement on coronavirus to boost the time he spends on more politically expedient topics, Trump and his aides are now expected to refocus his attention to the global pandemic and the next economic relief package currently underway on Capitol Hill.

“So we’ll be doing these quite often. We’re going to keep you abreast of this and we’ll also talk about some of the other topics like our economy, which is doing well,” Trump said at the conclusion of his appearance on Tuesday.

Ahead of the news conference, a second administration official said the president was likely to make weekly appearances in the briefing room or Rose Garden to update the public on the pandemic, the development of a Covid-19 vaccine and other efforts to reboot the economy and reopen educational and childcare facilities.

The expected increase in Trump’s official appearances is not without risk.

White House aides and Trump’s campaign team put an end to his daily coronavirus updates earlier this spring after they devolved into rambling news conferences replete with erroneous health claims, false statements about testing and therapy treatments, along with backbiting insults toward governors who implemented strict stay-at-home orders, criticized the administration’s response or, in the unusual case of Georgia’s Republican Gov. Brian Kemp, reopened non-essential industries too quickly.

Multiple polls conducted in late April, near the end of Trump’s briefing run, found growing levels of distrust in the president as a reliable source of information on the pandemic.

Some White House allies urged Trump ahead of his Tuesday appearance to employ a different format this time around — one where he avoids skirmishes with reporters, shows empathy and provides clear examples of how his administration is dealing with the devastating public health crisis.

Whether Trump will continue to heed the advice of Fleischer or others in his orbit remains unclear; the president has repeatedly veered back into his undisciplined approaches, just as he did in March even after winning a moment of praise for a more somber tone about the crisis.

During an Oval Office photo op on Monday, he cast the string of briefings he participated in earlier this year as “very successful” despite their overlap with steep declines in both his approval rating and voter confidence in his handling of the novel coronavirus.

“I was doing them and we had a lot of people watching, record numbers watching in the history of cable television… And we were doing very well,” he said.

At the time, many of the administration’s allies worried that Trump was overexposing himself to voters. Recognizing their boss’s proclivity for exaggerated statements and heated exchanges with the press, the briefings left several White House officials on edge – wondering which comment or critique would generate the next news cycle and whether it would further impair his bid for a second term. Some of the briefings surpassed two hours and featured contradicting information from the president and health officials.

When Trump took the podium on Tuesday, it was clear aides had persuaded him to strike a different tone. The president, who has struggled to define his 2020 opponent or outline a convincing message for reelection, veered off track only once to address a question about the recent arrest of Ghislaine Maxwell, an associate of convicted sex offender Jeffrey Epstein, who died by apparent suicide while in federal custody last summer.

The brief response was a reminder of the risks associated with Trump’s return to the briefing room, where his previous willingness to participate in hour-long grillings generated unflattering news cycles for his administration.

The president took 16 questions on Tuesday and was in and out of the cramped room in less than a half hour, a development that one of the administration officials described as “a step in the right direction.”