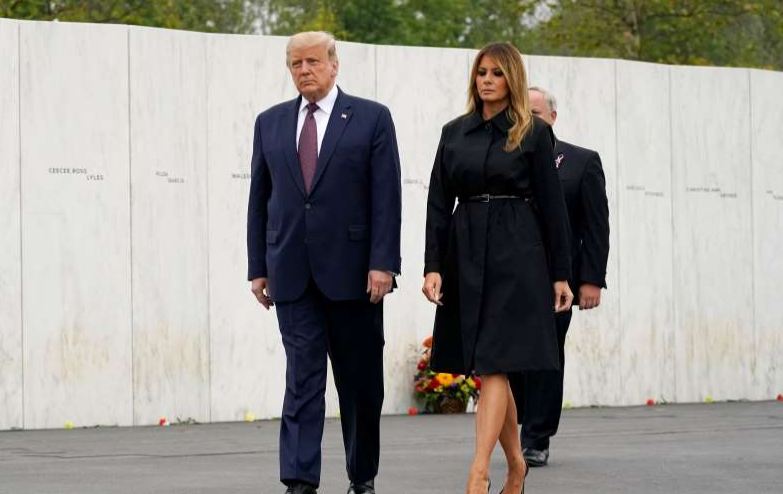 President Trump marked Friday’s 19th anniversary of 9/11 by visiting the rural Pennsylvania field where Flight 93 crashed, as most of the nation’s other prominent politicians gathered in New York City to remember and honor the victims of the worst terror attack in American history.

“When terrorists raced to destroy the seat of our democracy, the 40 of Flight 93 did the most American of things: They took a vote and then they acted,” Trump said in prepared remarks. “Together, they charged the cockpit, they confronted the pure evil and in their last act on this Earth, they saved our capital.”

A small crowd of family members of victims of Flight 93 were gathered on a lawn in front of Trump as he spoke.

The attendants wore face masks and sat at least six feet apart in compliance with coronavirus guidelines, a reminder of the pandemic struggles underpinning this year’s somber commemoration ceremonies.

Though his speech was devoid of characteristic partisan jabs, Trump couldn’t resist listing off some of his administration’s achievements as part of his remarks.

“Less than one year ago, American warriors took out the savage killer and leader of ISIS, al-Baghdadi,” Trump said, as the Flight 93 family members looked on. “Soon after, our warriors ended the brutal reign of the Iranian butcher, who murdered thousands of American service members. The world’s top terrorist, Qassem Soleimani, is dead.”

The president also paid tribute to the hundreds of first responders in his native New York who gave their lives to search for survivors in the rubble of the World Trade Center.

Over in New York, Joe Biden, Vice President Mike Pence, Gov. Cuomo and a phalanx of other political leaders from both sides of the aisle gathered at Ground Zero to take part in a memorial service.

Pence and Biden could be seen bumping elbows and exchanging a few words before the ceremony got underway.

OBAMA WARNS ON FLYNN FLIMFLAM: ‘RULE OF LAW AT RISK

Coronavirus: Spain’s daily number of new infections falls again – for a third day in a row