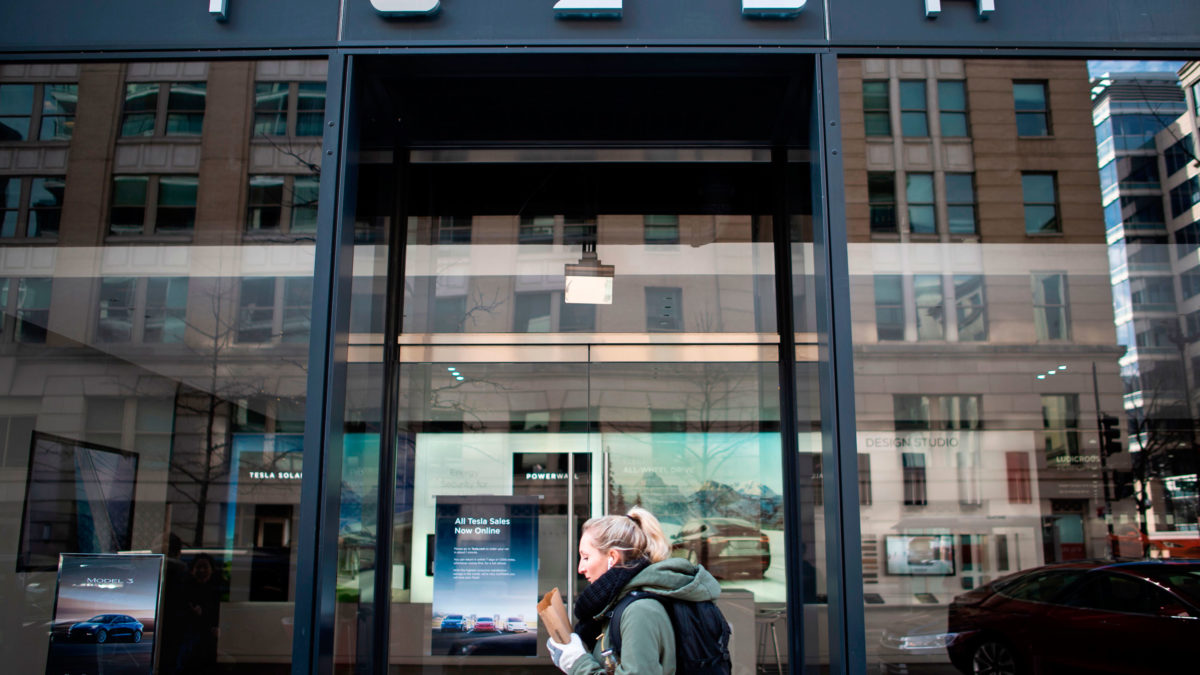 A woman walks past a Tesla store in Washington, DC on March 4, 2019. - Tesla is planning to unveil a new electric "crossover" vehicle March 14 which is slightly bigger and more expensive than its most affordable model, according to chief executive Elon Musk. The news comes shortly after Tesla unveiled its lowest-priced Model 3, an electric car designed for the masses, at a base price of $35,000, with deliveries promised within one month. (Photo by Andrew CABALLERO-REYNOLDS / AFP) (Photo credit should read ANDREW CABALLERO-REYNOLDS/AFP via Getty Images)

Tesla is telling staff to brace for pay cuts and furloughs as the Covid-19 pandemic disrupts operations and cripples demand.

Starting next Monday, US employees at the electric car company who hold director and vice president-level roles and above will see pay reductions of 20% to 30%, and “everyone else” will receive a pay cut of 10%, according to an internal email obtained by CNN Business.

The reductions are expected to be in place until the end of June. Pay rises and equity grants will also be put on hold.

Non-US employees will also face similar reductions, according to the email.

Tesla is running “minimum critical operations” at the moment, and expects to resume full operations at US plants in early May “barring any significant changes,” the email said.

But until then, the company needs to manage costs, and implement what it calls “a shared sacrifice … during these challenging times.”

Tesla did not respond to a request for comment outside of working hours.

Employees who can’t work from home and haven’t been assigned to critical work on site will be furloughed, and the majority of furloughed staff will receive unemployment benefits “roughly equivalent to take home pay,” the email said.

The Covid-19 pandemic has disrupted major automakers’ operations around the world. Volkswagen, Toyota, Fiat Chrysler and others have had to close plants or suspend operations across Europe and Asia.

Tesla recently opened a factory in Shanghai, where production of its Model 3 car was delayed earlier this year because of the outbreak.

In the United States, the current epicenter of the pandemic, car sales have plummeted as millions across the country have been told to stay at home except for essentials such as shopping for food, drugs or seeking medical care.

Other major corporations, including automakers like Ford, have also announced executive pay cuts to mitigate the consequences of the outbreak.