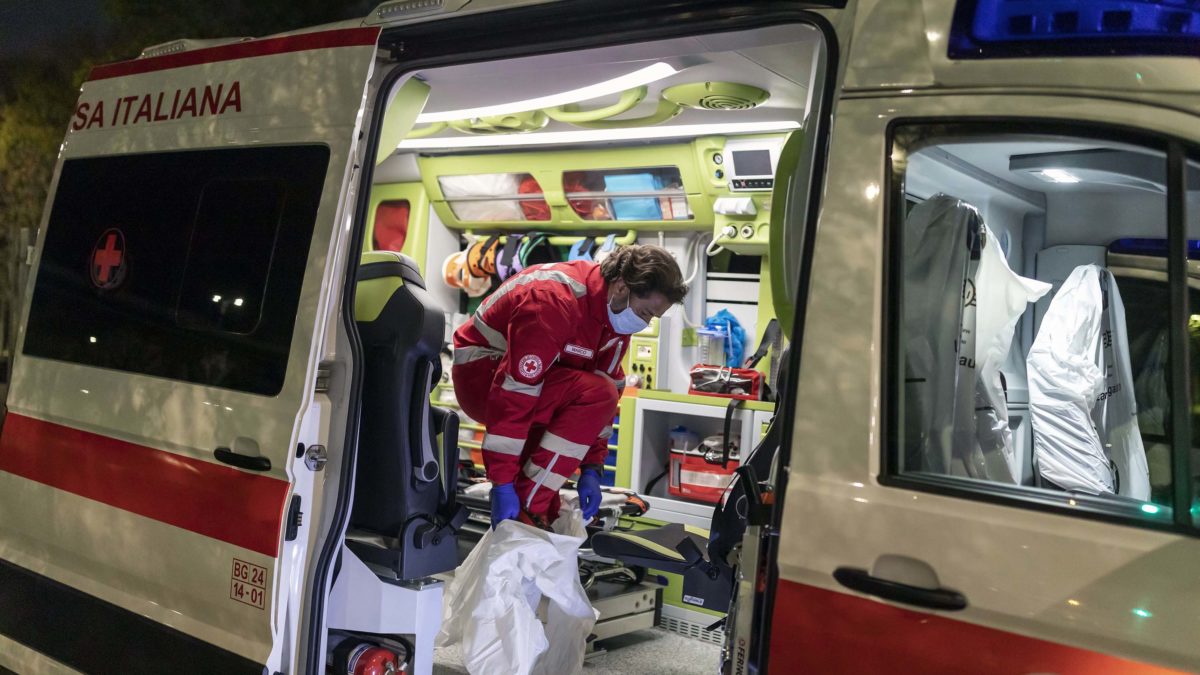 BERGAMO, ITALY - APRIL 8: (EDITORIAL USE ONLY) Marco Vangelista, crew member of an ambulance of the Italian Red Cross, puts on the protective suit before an emergency intervention on a patient positive to COVID-19 on April 8, 2020 in Bergamo, Italy. The number of new COVID-19 cases appears to be decreasing in Italy, including in the province of Bergamo, one of its hardest-hit areas. But as the infection rate slows, life is still far from normal. A local newspaper, the Eco di Bergamo, estimates that the province has lost roughly 4,800 people to coronavirus - almost twice an official tally that only counts hospital deaths - and everyone here knows someone who's fallen ill: a neighbor, a family member, a relative, a friend or an acquaintance. The Italian Red Cross, which runs an ambulance service here, continues to field constant calls for help. With only a small portion of its 600-person volunteer crew and 38 paid staff able to report for duty, those who remain work shifts of up to 20 hours long. (Photo by Marco Di Lauro/Getty Images)
Coronavirus, Europe, News

As the curve of new coronavirus cases begins to flatten in Italy, talks between the regions and the national government on the so-called “Phase 2” of restrictions are intensifying.

Phase 2 is the next stage of Italy’s attempts to contain its devastating coronavirus epidemic; it is expected to see the government gradually reopen the country’s economy following the advice of its scientific committee.

“The data indicates that the number of people with symptoms are decreasing and that the curve is in a decreasing phase. It shows a country with different zones, with a different circulation intensity,” Silvio Brusaferro, head of the National Institute of Health said during a press conference on Friday.

The Institute said that Italy’s number of cases won’t drop to zero by mid-May, meaning that the infection will continue to circulate. Brusaffero said it will be extremely important to be able to identify possible outbreaks, carry out tests, tracing and isolation of contacts and eventually create red zones to contain the virus.

On Monday, Italian Prime Minister Giuseppe Conte is expected to hold a cabinet meeting, and on Wednesday he will talk with some of the regional governors to try and come up with a more coherent nationwide calendar for reopening.

“May 4 is a date around which we have to build Phase 2. I hope that there will be a meeting between the key figures as soon as possible … but I want to be clear on one point: The battle is not won,” Health Minister Roberto Speranza told Italian radio on Monday.

Regarding the “Immuni” contact-tracing app, chosen by the government to track the spread of the virus in May, Speranza said it “is one of the tools in this crisis.”

Speranza also stressed the importance of the question: “How we will reopen?” and not necessarily: “When?”

“We are now equipping ourselves with a national guideline on how to meet this challenge,” Speranza added.

Lombardy looks to emerge from lockdown: Last week Lombardy, the Italian region worst affected by coronavirus, where nearly half of the total number of deaths have been registered, presented guidelines for a reopening of production activities: diagnosis and testing, digitalisation, social distancing, and rights of workers.

Lombardy is one of the richest regions in the EU, according to the latest Eurostat figures.

The reopening of businesses “must take place in the maximum protection of health and sanitary provisions,” the Lombardy region said Sunday in a statement.

However, the mayor of Milan, Beppe Sala, criticised the Lombardy region’s plan in an interview with the Financial Times on Monday.

“I am very critical of (Lombardy’s governor) Fontana’s proposal. Lifting restrictions too soon could lead to extreme consequences,” he said.

“Three conditions are necessary to reopen,” Sala explained. “The first is trivial: We are notified in advance, because public transport cannot be reorganised in 48 hours. The second is fundamental: We do our part by reorganising, for example, transport and subways, but if the others don’t do their part, everything becomes useless,” Sala told the paper.