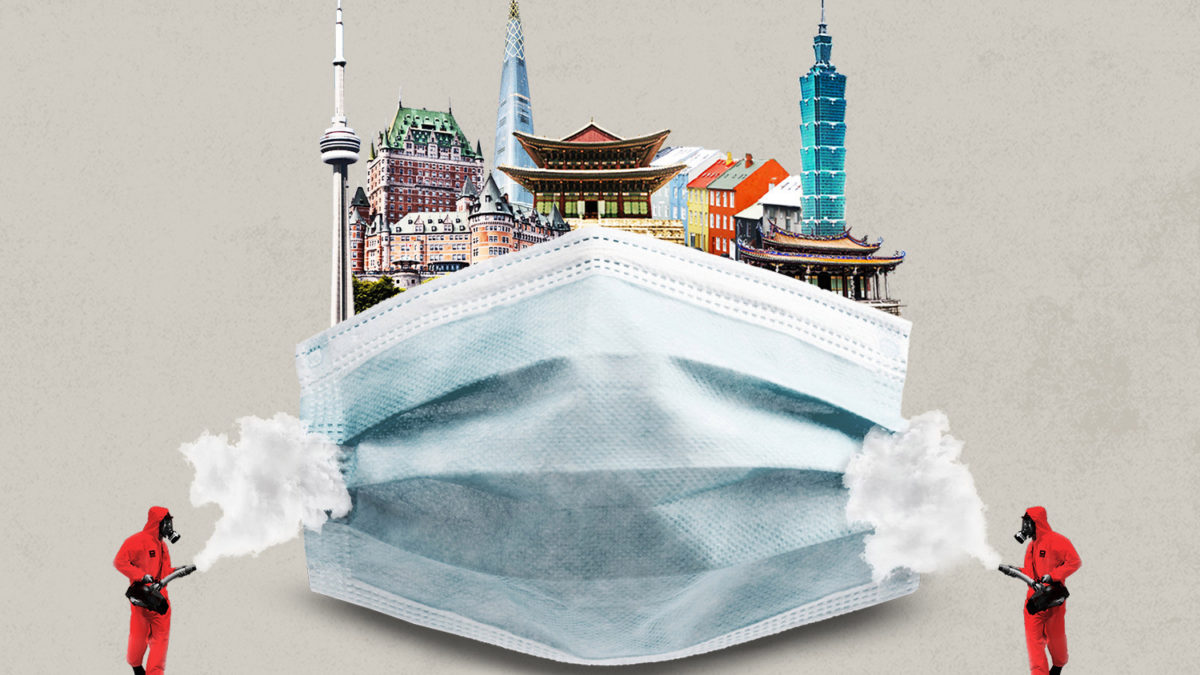 Lessons from Taiwan, Canada, South Korea, Georgia, and Iceland show that the coronavirus can be stopped.

The United States is now an epicenter of the coronavirus pandemic, with epidemiological models publicized on Tuesday suggesting the disease could infect millions of Americans in the coming months, killing between 100,000 and 240,000. Hospitals in the state of New York, where there are more than 75,000 confirmed cases, are already overwhelmed and experiencing shortages of critical medical equipment such as ventilators and protective gear. The grim projections indicate that the virus has not reached its peak and that the situation will get worse.

Amid the pandemic, U.S. President Donald Trump and other world leaders have faced criticism for their slow and ineffective response since it became clear that the coronavirus would not be contained to China, where it originated. Other countries such as Taiwan, Singapore, and South Korea have been heralded as relative success stories for flattening the curve before infection rates soared exponentially. As countries brace for a monthslong crisis, we’ve collected our top reads and interviews from recent weeks on how governments and citizens around the world have responded to the threat of COVID-19 so far.

Taiwan recorded its first case of the coronavirus on Jan. 21, but it has managed to keep its number of confirmed cases to just 329 with five deaths as of April 1. The country is effectively locked out of the World Health Organization (WHO), since membership is usually only accorded to countries that are members of the United Nations, which does not recognize Taiwan. But as Hilton Yip wrote on March 16, the government sprang into action as soon as news broke about a mysterious illness in Wuhan. Taiwan, which sits just 100 miles from mainland China, began inspecting travelers coming from the city on Dec. 31, set up a system to track those in self-quarantine, and ramped up production of medical equipment in January. (Taiwan has not yet resumed exports of the supplies, including surgical face masks.)

Yip attributed Taiwan’s early and effective response to past experience. “Given that Taiwan has faced everything from its giant neighbor—the spreading of fake news, military threats, the withholding of vital medical information during the SARS outbreak in 2003—the country knows it must be on its fullest guard whenever any major problem emerges in China,” he wrote.

South Korea, which had one of the largest initial outbreaks outside China, also managed to slow the spread of new coronavirus cases without instituting any lockdowns. Devi Sridhar argued on March 23 that the country’s exemplary model for mass diagnostic testing was the only way to contain the outbreak—and that other countries should look to East Asia for lessons. South Korea, which has a population of 51 million, tests more than 20,000 people daily at designated testing sites and uses isolation and widespread contact tracing to break chains of transmission—as recommended by WHO. “South Korea is showing how this model ultimately pays off in reducing spread, taking pressure off health services, and keeping its death rate one of the lowest in the world,” Sridhar wrote.

In the West, Canada managed to roll out more expansive testing than the neighboring United States, as Justin Ling wrote on March 13. In January and February, Canada began setting up the infrastructure to conduct tests and contact tracing. The early response in part came from the country’s experience during the SARS outbreak in 2003. (Then, Canada was the only country outside Asia to report deaths from the virus.) Canada has a well-funded public health care system, and its criteria for who can be tested for COVID-19 is not as limited as in the United States. “Canada has spent the past two decades preparing for this moment,” Ling wrote. “By catching cases early, and investigating their origins, Canada has blunted the impact of the virus thus far.”

Some success stories are unexpected. On the Don’t Touch Your Face podcast, Foreign Policy’s Amy Mackinnon singled out the early response of the country of Georgia. Despite its small size and struggling economy, the country began taking serious measures at the end of February, including closing schools and conducting widespread diagnostic tests. Georgia has so far confirmed 117 cases and no deaths from COVID-19. “I think the fact that the government took it seriously from the very start has helped,” the Georgian journalist Natalia Antelava told Mackinnon. So has Georgia’s mindset. “This is a country that is used to crisis, and it is a country that has lived through civil wars and the Russian invasion in 2008 and a very dark period through the ’90s after the collapse of the Soviet Union,” Antelava said.

Mackinnon also interviewed Jelena Ciric, a journalist in Iceland, which has one of the highest per capita rates of confirmed coronavirus cases. That’s because it has also tested more people per capita than anywhere else in the world—an effort led by a private medical research company based in Reykjavik. The research will be used to inform the global response to the pandemic. “What that gives us in Iceland is somewhat of a clearer picture of how the virus is spreading through the general population,” Ciric said. “Our growth has not actually become exponential due to these early measures of quarantining people who have likely been exposed to the virus.”

Throughout Europe, many countries are under lockdown—but not Sweden, which has remained stoic amid its high-risk outbreak. The country has reported 4,947 cases, but its government is betting that its distinctive high trust culture means that individuals will act responsibly without being ordered to do so, wrote Nathalie Rothschild on March 24, reporting from Stockholm. “[T]here is an expectation that citizens will conform, that they will take personal responsibility and avoid crowds, work from home, keep a distance on public transport, and so on, without being strong-armed into doing so,” she wrote. The next two weeks could reveal whether that is a precarious calculation.

Elsewhere, citizens are not so trusting of their governments’ expertise. In Russia, daily life continued as normal until mid-March, when medical experts began questioning official statistics showing a low rate of COVID-19 infection. The government moved quickly to close the borders and announce a large economic stimulus plan, wrote Foreign Policy’s Reid Standish, reporting from Moscow. “Should the true scope of the virus prove to be higher than shown in official statistics, it would mean that the Russian government has missed its chance to slow the pandemic,” he wrote. Two weeks later, it appears that the coronavirus could present a serious political challenge for President Vladimir Putin, as Standish reported on March 30.

There is also significant doubt about the statistics in Iran, which officially reports 47,593 coronavirus cases and 3,036 deaths as of April 1. The real figures are almost certainly much higher—making Iran a coronavirus epicenter, Maysam Behravesh argues. As cases climbed in China in January, Iranian officials didn’t restrict travel between the countries and apparently delayed announcing an outbreak in the religious city of Qom until after the first COVID-19 deaths. Many high-ranking figures have since died from the virus. Behravesh attributes Iran’s failed response in part to misunderstanding.

“Iran’s general neglect of the colossal public health threat posed by the coronavirus also emanates from its fundamental unfamiliarity with the nature of such a peril,” he writes. “After all, the virus isn’t a domestic revolt or foreign intervention aimed at regime change, but a creeping, invisible menace against the whole society that requires a science-centered response.” Source Audrey Wilson is an associate editor at Foreign Policy.

It’s time to talk seriously about the food supply