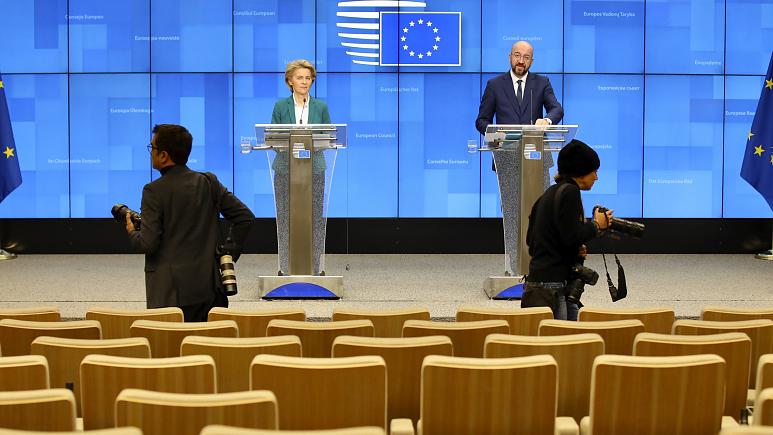 The European Union has come under fire for its slow response in the coronavirus outbreak.

The bloc’s early missteps set the stage for heavy criticism at a time when people are looking to governments to protect them from an invisible enemy.

At yesterday’s EU video summit, leaders failed to agree on further economic measures for member states during the rapidly evolving pandemic, an outcome that highlights existing divides between member states on economic policy.

“Basically the outcome of the summit is something not particularly surprising but still it’s obviously an outcome which is going to cast a shadow on a previously pretty efficient EU response,” said Agata Gostyńska-Jakubowska from the Centre for European Reform.

Member states did not agree on pooling mutual debt through so called “corona-bonds”, something that had been called on by several member states but opposed by those often viewed as more frugal such as Germany and the Netherlands.

“We need to work on a common debt instrument issued by a European institution to raise funds on the market,” nine member states including hardest hit Italy and Spain wrote in a letter to European Council President Charles Michel ahead of the video conference summit.

Spanish Prime Minister Pedro Sanchez set out a deadline of two weeks for a more concrete agreement, demanding that the EU “learn the lessons of the past and not fail citizens again” after countries disagreed on the recovery bonds.

“The future of the European project is at stake, we choose between a coordinated and united EU or individualism,” Sanchez said.

An early roadblock in the EU response
It’s not the only misstep that’s occurred in the EU’s response to the health crisis that has taken the lives of thousands of people in Europe.

She was likely referring to bans on exporting personal protective equipment such as masks when Italy called on member states for help.

Italy’s ambassador to the EU Maurizio Massari wrote in Politico on March 10 that the actions of other member states did not show “European solidarity” as he called for a European response to the pandemic.

“This initial lack of solidarity with Italy has already made for a pretty big reputation damage,” said Gostyńska-Jakubowska. “Average Italians will probably remember more favourably the fact that the Chinese are now sending them equipment and will hold it against the member states for turning their back on them.”

Indeed it wasn’t until March 15 that internal market commissioner Thierry Breton tweeted that bans on equipment were lifted after “intense discussions” with Germany and France. The Commission has said since that the two EU members have sent more masks and equipment to Italy now than China has.

The pandemic has also revealed there is little coordination between member state health systems.

“It showed us how decentralised the members of the European Union are in this policy area,” said Cecilie Felicia Stokholm Banke, a senior researcher at the Danish Institute for International Studies.

There is no common system across the European Union for testing, quarantine, or lockdowns. Germany was one of the first countries to close its internal borders acting independently of other states.

Comparing health information across the bloc is tricky, experts have said, due to differences in testing methods and how data is compiled.

European action to combat the coronavirus crisis
But despite those early missteps, there have been large efforts to address the crisis at the European level.

One success in particular, some say, was to create a European stockpile of medical equipment, through the civil protection mechanism that Italy had asked for help from early on. The EU is also putting €140 million into research projects to support treatment, testing and the search for a COVID-19 vaccine.

This month, the Commission banned exports of protective medical equipment outside the EU without express authorisation and closed the bloc’s external borders.

But mainly, they have taken certain steps to use their economic role to help member states during the crisis – including loosening existing rules on state finances. This included issuing an escape clause that lifts the rule that governments must keep their budget deficits below 3% of GDP.

But experts say the EU needs to be even more decisive if it wants to preserve its reputation and position amongst member states.

“This could be a make or break moment for the Eurozone,” said Gostyńska-Jakubowska.

An opportunity for nationalists?
The various moves to help the system have not stopped criticism of the bloc – particularly from some who welcome countries’ seemingly nationalistic policies put in place to protect citizens.

Carnegie Europe visiting scholar Marc Pierini wrote in a commentary on the EU’s handling of the crisis that the pandemic’s timing raised the “political stakes” as it comes after “a decade marked by the emergence of populist and nationalist parties who leaders express open hostility to European integration”.

Already the leader of France’s far-right Marine Le Pen declared the EU as the “first death” of the pandemic, speaking out about the bloc’s “incapacity” to act in an interview with Russia Today (RT).

Indeed many far-right politicians have taken this opportunity to denounce the EU’s response to the crisis, talking up the closing of internal borders as a rejection of the message the bloc preaches.

Experts concur that this is a test for the bloc and its values, but many say it’s also a key opportunity.

“In the best-case scenario, political leaders not only handle the crisis well, but use the momentum to further much needed steps of deepening,” wrote Daniela Schwarzer and Shahin Valée from the German Council of Foreign Relations in a policy brief released earlier this month.

“I wouldn’t be that pessimistic actually though I do think it’s early to say whether the Eurozone would come out stronger from this particular crisis,” said Banke.

“I think we will see the European Union actually being able to tackle this situation,” she added.

He searched through hundreds of bodies for his father