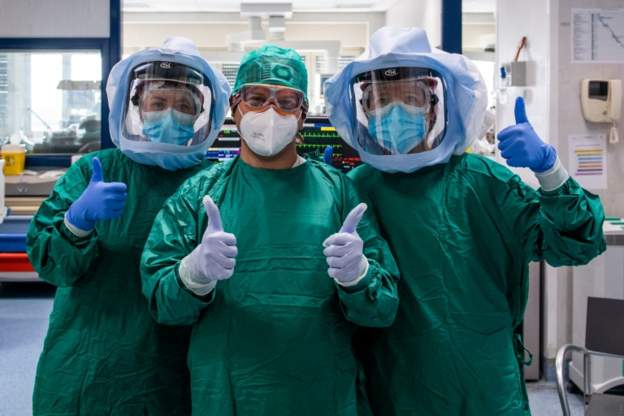 Austria plans to reopen bars and restaurants in mid-May, while Italy’s prime minister urges “maximum caution” in easing its lockdown. Here’s the latest from Europe:

Italy’s Prime Minister Giuseppe Conte said he would announce a plan by the end of this week to slowly exit lockdown starting from 4 May, but urged “maximum caution”. Latest figures on Tuesday show deaths rose by 534 in the last 24 hours, but the country registered its second daily decline in the number of people currently confirmed to have the virus

Austria’s Chancellor Sebastian Kurz says bars and restaurants will be able to reopen from 15 May – although staff will probably have to wear face masks, and there will be rules on group sizes and closing times. Religious services could also resume then. But if infection rates rise again, the government will reimpose tighter restrictions

Children have not been allowed outside at all under Spain’s lockdown rules. But as of Monday, children under 14 can accompany their parents to the pharmacy and on grocery trips – though they still won’t be able to go out and play. The government has extended the nationwide lockdown until 9 May
In France, the number of coronavirus patients in intensive care fell for the 13th consecutive day, dropping from 5,683 to 5,433 in the past 24 hours. Deaths continued to rise, however, increasing by 531 to 20,796 in total on Tuesday

And a six-year-old in Italy has won a competition to redesign his club’s football kit. Pescara launched the competition in a bid to ease the boredom for kids stuck inside

Trump holes up at White House as protests tear through US