Home > News > The Mafia is poised to exploit coronavirus, and not just in Italy 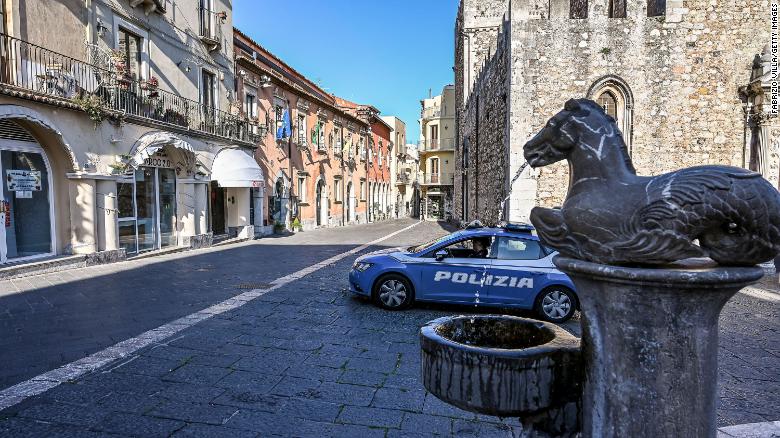 Earlier this month, there was a funeral procession in the Sicilian town of Messina, in defiance of a nationwide lockdown in Italy.

It was no ordinary procession. The couple of dozen people walking behind the hearse were paying their respects to a 70-year-old scion of one of the most notorious Mafia famiglie.
Claudio Fava, president of the regional anti-Mafia committee, described it as a “real scandal, an insult to those who lost their relatives in the pandemic.”
Funerals have been banned in Italy since early March as part of a broader set of restrictions aimed at curbing the Covid-19 outbreak that has killed nearly 23,000 people as of Friday.

That the procession took place at all speaks to the power — and the impunity — wielded by the Mafia in parts of Italy.

Senior anti-mafia officials and researchers have told CNN that Mafia clans are already taking advantage of the coronavirus pandemic, especially in southern Italy.

They are providing everyday necessities in poor neighborhoods, offering credit to businesses on the verge of bankruptcy and planning to siphon off a chunk of the billions of euros being lined up in stimulus funds.
The most powerful branch of the Mafia — the ‘Ndrangheta, based in Calabria — is thought to control 80% of the European cocaine market. Even as the pandemic made distribution more difficult, it took advantage of the lockdown.

Journalist — author of “Gomorrah: Italy’s other Mafia,” an expose of the Camorra mafia in Naples — told CNN that “the traffickers took advantage of the [lack of] oversight of law enforcement in the ports, in the airports.”

“Who was checking any more?” he asked.

Exploiting a desperate need for cash

But Mafia groups are about far more than trafficking cocaine. They are deeply embedded in the economy.
While traditional Mafia activities such as extortion may suffer during the pandemic, there will also be fresh opportunities, said Anna Sergi, senior lecturer in criminology at the University of Essex.

Franco Gabrielli, head of the Italian police, said that Mafia organizations are already deeply enmeshed in parts of the economy “that have not been blocked by the restrictions of Covid-19: the agriculture-food chain, the supply of medicines and medical equipment, road transport.”
It’s a view shared by Saviano.

“Funeral homes they invest in, hospital laundries. Cleaning companies they’ve always invested in. Good delivery companies, gas stations, this is the portfolio they’ve had for the past 10 years,” he said.

Such is the financial muscle of the ‘Ndrangheta, Gabrielli said last week, that it could exploit a desperate need for cash faced by businesses it doesn’t currently control.

“At the end of the emergency, the criminal associations could have polluted the economy, controlling companies previously not infiltrated,” he said.

Sergi says past crises have shown that the Mafia can move money quickly outside the banking system and demand fewer guarantees than banks. Lending money to distressed companies and then gradually taking control of them is a well-oiled mafia tactic.

Nicola Gratteri, an anti-Mafia investigator and head of the public prosecutor’s office in Catanzaro, told CNN that businesses like restaurants and hotels are especially vulnerable.
The last great recession, in 2008, offers a sobering comparison.

Anti-Mafia groups like SOS Impresa said that crisis turned the Mafia into Italy’s largest bank. The Palermo-based group estimated in 2012 that the Mafia had 65 billion euros ($72 billion) in liquidity and described extortionate lending as “a national emergency.” At the same time, many Italian banks were struggling to stay afloat and borrowing heavily from the European Central Bank.

Saviano believes liquidity will be “the center of everything” in the aftermath of the coronavirus crisis.
“The organization will come to a company in crisis and say: ‘We don’t buy everything, but we will give you cash in exchange for shares — to become part of your company,'” he said.

“This is what they will do with everyone.”

At the end of last month, video footage of a couple hammering at the doors of a bank in the southern city of Bari went viral. “You suck, the state sucks. How are we going to manage?” the woman shouts.

These are exactly the sort of circumstances the Mafia exploits. The ‘Ndrangheta and other clans don’t simply live off societies where they are strong. They build loyalty by supplying necessities to poorer neighborhoods and cash to struggling businesses.

To Gratteri, this is “a method to create allegiance. If we — the state — don’t show ourselves to be efficient, what could happen is that the Mafia presents itself as a winning a model, and maybe asks for a return favor at the elections.”

Zora Hauser, a researcher into organized crime at Oxford University, said that “what we are seeing — and will see more and more as the economic and social crisis unfolds — is Mafia groups returning to their core businesses of protection and governance.”

Salvo Palazzolo, a journalist with La Repubblica newspaper, received threats after reporting on food handouts by someone with Mafia connections in the poor “ZEN” district of Palermo in Sicily.

“At this moment, Mafia families of Palermo [the Cosa Nostra] are very strong, especially in drugs and online gambling. They have a lot of liquidity,” Palazzolo said.

“I would say the Cosa Nostra are strengthening their control through welfare assistance to families who are in jail, and now this is spreading to all poor families. They want to show themselves as an alternative to the state.”

In another district of Palermo, a local Mafia boss tried to organize a Good Friday church service in defiance of the lockdown before police intervened.

Criminologist Anna Sergi says the Mafia want the community both to like and need them.

The government is aware of the danger. CNN obtained a letter written by Interior Minister Luciana Lamorgese to regional leaders warning that criminal organizations would try to use “forms of support” to gain popularity.

As Zora Hauser puts it: “This can be cashed by the organization in different ways, the most worrying one being votes.”

The government has established a 400 million-euro ($435 million) food voucher fund and allotted another 4.3 billion euros ($4.8 billion) to local mayors.

As Prime Minister Giuseppe Conte promised on March 28: “We know that many suffer, but the state is there.”

But it’s a daunting challenge. Saviano says that during this crisis, the mafia will try to hire the “new unemployed” as its foot soldiers. As many as three million Italians work “off the books,” according to multiple surveys. One survey by the Organisation for Economic Co-operation and Development in 2017 estimated that a quarter of Italians in their early 20s were neither in employment, nor in education or training.

Stimulus bonanza
Getting Italy back to work is the government’s priority. It’s injecting 750 billion euros ($815 billion) into the economy.

Part of the investment is to guarantee loans to businesses — covering more than three-quarters of a large company’s borrowing. But given the massive sums being dispersed, anti-Mafia investigators worry that some of those loans, as well as other support, will go to Mafia-run businesses.

It’s not just Italy’s problem. The Mafia’s tentacles spread across Europe and far beyond. The ‘Ndrangheta has a Europe-wide network for distributing drugs, often using pizza restaurants as fronts. It has also invested in property.

For now, reinforced border controls and nationwide lockdowns are choking distribution networks for drugs. But like the coronavirus, the mafia groups are no respecter of borders. “The Mafia is very powerful also in Germany,” said Roberto Saviano. “They shoot less, but they are very powerful.”

Earlier this month, Pope Francis prayed for “people who during this time of the pandemic, trade at the expense of the needy and profit from the needs of others, like the Mafia, usurers and others.”

“May the Lord touch their hearts and convert them,” the Pope said.

History, as well as current evidence, suggests he may be disappointed.

More than 1,400 medical workers sign up to volunteer across New York City