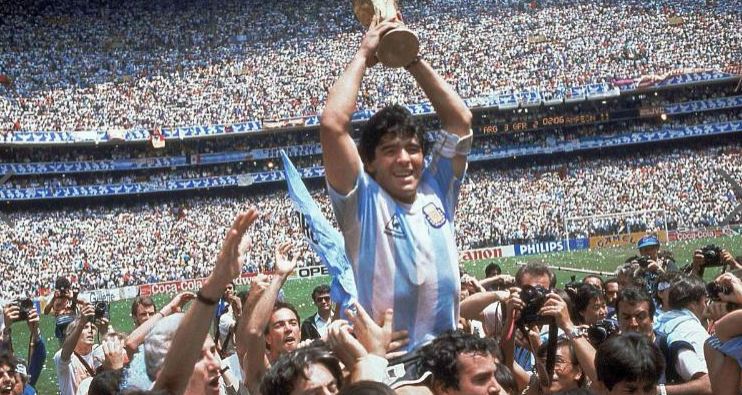 Those four words — “the hand of God” — describe one of the most iconic moments in football history, a goal that belongs to one of the most iconic footballers in the game’s history — Diego Armando Maradona, who has died at the age of 60.
Maradona was born in 1960 in the Villa Fiorito area of Buenos Aires and would go on to become one of the most famous faces on the planet.
On the afternoon of that moment of divine intervention, a sweltering day in Mexico City in 1986, Maradona was at the peak of his powers.
While that first goal against England in the quarterfinals of the 1986 World Cup — a punch of the ball over goalkeeper Peter Shilton, a player who stood 20 centimeters taller than the diminutive Argentine — showcased Maradona’s guile, the one that followed four minutes later displayed in full the majesty of his footballing abilities.Maradona runs past English defender Terry Butcher (left) on his way to dribbling goalkeeper Peter Shilton (right) and scoring his second goal against England in the World Cup in 1986.
After receiving the ball inside his own half, Maradona weaved this way and that, his short, stocky legs pumping rapidly as he left seven England defenders in his wake, rounded Shilton and slotted the ball into the net.
“Genius! Genius! Genius!” went the legendary commentary of announcer Victor Hugo Morales. “What planet did you come from? I want to cry.”
So did England’s players, and its nation of football fans, but not for the same reasons. That second goal was later voted FIFA’s “World Cup Goal of the Century.” It’s a fitting title for undoubtedly one of the greatest goals ever scored.
Maradona was unquestionably a household name before the 1986