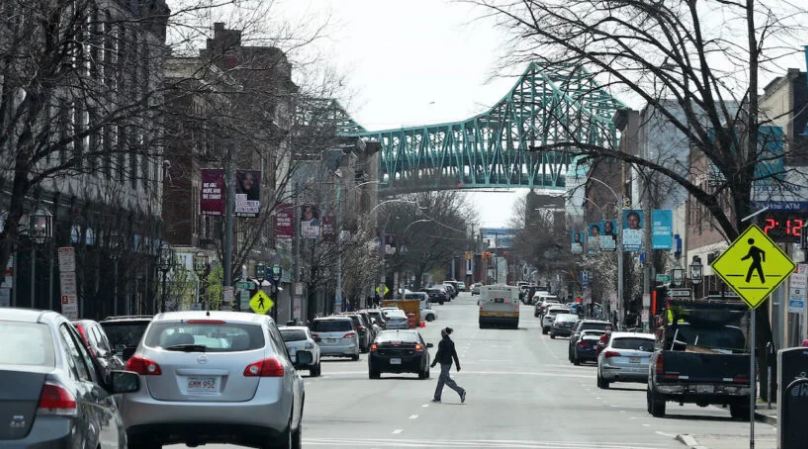 For the first time since the COVID-19 pandemic began to rock Massachusetts, state officials released a breakdown of the number of coronavirus cases — and rates — by municipality Wednesday.

The numbers confirmed what some hot-spot communities already knew, such as Chelsea, where its location, size, and workforce has crafted a perfect storm for the virus to take hold at a rate faster than anywhere else in the commonwealth.

Statewide, the coronavirus rate is approximately 487.76 per 100,000 people, officials said.

“Having the ability to look at this virus through the lens of its impact on specific cities and towns will help us identify potential hotspots, inform the public health response, assist cities and towns working to slow the spread, and help the state appropriately deploy resources,” state Secretary of Health and Human Services Marylou Sudders said Wednesday.

Due to privacy concerns, data will not be released if a city or town with 50,000 residents or less has fewer than five reported cases, she said. The numbers will be updated weekly, every Wednesday.

In Chelsea, where 712 cases were reported and 39 people had died as of Tuesday, the rate of COVID-19 infection is on par with New York City, the epicenter of the United States outbreak, despite Chelsea’s substantially smaller population of approximately 40,000 residents.

A large factor that’s contributed to the spread in the densely-settled community is the fact that many residents are part of the state’s essential workforce, which means they are still heading out of the house to go to work.

“Many of our residents are at risk due to their work,” officials wrote in a post on the city’s website last week. “They are working in essential sectors (food establishments) and engaged with high levels of public interaction (healthcare, personal services).”

Chelsea, a mere 1.8 square miles total, is also one of the densest communities in Massachusetts. There are over 22,000 people-per-square-mile — approximately three times higher than the rate in Boston.

Additionally, officials say many are heavily reliant on public transportation, and, furthermore, the city’s location between the Tobin Bridge and Logan Airport has exposed its largely working class, Latino population to high amounts of air pollution for decades, putting residents at higher risk for COVID-19.

In Brockton, there have been 1,202 cases of coronavirus since March 1 and 725 of them were active as of Wednesday. Thirty-nine people have died from the virus, according to the city’s website.

At-Large City Councilor Rita Mendes told the Boston Herald that some residents are continuing to go out without wearing protective gear and are gathering at neighbors’ homes, despite calls from officials to take precautions.

“I don’t know what it will take in order for them to realize that this is serious, with more and more deaths every day,” Mendes said.

As of Tuesday, Randolph had recorded 367 cases and fell among the cities and towns with the highest coronavirus rates.

According to a review of city Health Department confirmed cases, many residents impacted by COVID-19 work in the health care sector.

“Health care employees are more likely to be exposed and thus required to be tested more frequently,” officials said in a statement Wednesday.

Many residents who have tested positive for the coronavirus in Randolph also work in retail positions, according to the city.

“Ultimately, many of our residents work in positions classified as essential by the state,” officials said. “Our residents are working on the front-line serving their fellow residents of the commonwealth putting themselves at risk on a daily basis. These statistics do not come as a surprise. We owe them a debt of gratitude for their service and bravery.”

Many cases are clustered in local nursing homes, Board of Health Chairman Ron Stant told the Herald.

At Williamstown Commons Nursing & Rehabilitation Center, 40 residents have tested positive for the coronavirus and 14 have died from virus-related complications, according to the facility’s website.

As of Thursday, there had been 610 coronavirus-related deaths in long-term care facilities — roughly half of the 1,245 deaths reported statewide.

“It’s kind of the worst of all possible worlds, because it’s a contained and vulnerable population,” Williamstown Town Manager Jason Hoch told The Boston Globe regarding the Williamstown Commons facility. “It’s so tough for the residents, the staff, and the families. We all want to fix it, but the painful part about this virus is, there is no fix.”

Similar to communities like Chelsea, the high rate stems from the fact many residents work essential jobs, meaning they’re on the front line of the pandemic and are often exposed to the virus, Mayor Dan Rivera told the Globe.

“Lawrence is a workforce for the Merrimack Valley and beyond, so we have people who are part of the essential workforce who go as far away as Nashua, N.H., and as far south as Boston,” Rivera said.