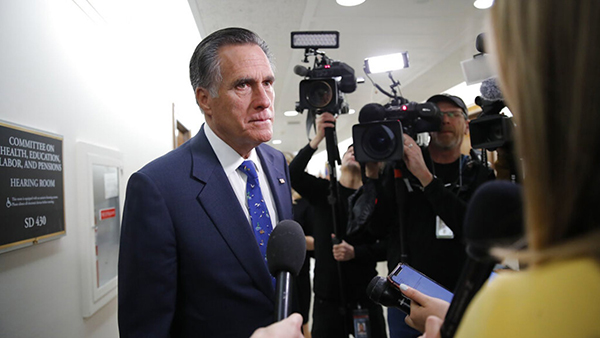 Several GOP senators have been forced into self-quarantine after either contracting the novel coronavirus, or interacting with individuals who have tested positive.

Here is a list of Republican senators who are currently in, or have been in self-quarantine amid the COVID-19 outbreak:

Sen. Rand Paul tested positive for coronavirus on Sunday and is under self-quarantine at his home in Kentucky.

“Senator Rand Paul has tested positive for COVID-19. He is feeling fine and is in quarantine,” Paul’s staff tweeted Sunday afternoon. “He is asymptomatic and was tested out of an abundance of caution due to his extensive travel and events. He was not aware of any direct contact with any infected person.”

“He expects to be back in the Senate after his quarantine period ends and will continue to work for the people of Kentucky at this difficult time,” a second tweet said. “Ten days ago, our D.C. office began operating remotely, hence virtually no staff has had contact with Senator Rand Paul.” 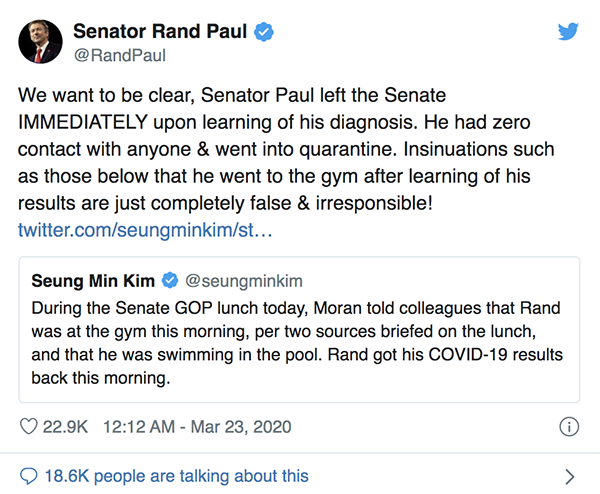 His team later tweeted: “We want to be clear, Senator Paul left the Senate IMMEDIATELY upon learning of his diagnosis. He had zero contact with anyone & went into quarantine. Insinuations such as those below that he went to the gym after learning of his results are just completely false & irresponsible!”

Sen. Mitt Romney, R-Utah, had lunch with Paul over the weekend amid negotiations over the stimulus package.

Romney said that his physician had instructed him to “immediately self-quarantine and not to vote on the Senate floor, after recently having lunch with Paul.

Sen. Mike Lee, R-Utah, said he would self-quarantine late Sunday, after apparently interacting with Paul, but emphasized he would work as much as possible remotely.

“Upon learning that my colleague Sen. Paul tested positive for COVID-19, I consulted the attending physician of the U.S. Congress,” Lee said Sunday. “He advised me that because I have no symptoms or other risk factors, a COVID-19 test was not warranted. However, given the timing, proximity, and duration of my exposure to Sen. Paul, he directed me to self-quarantine for 14 days.” 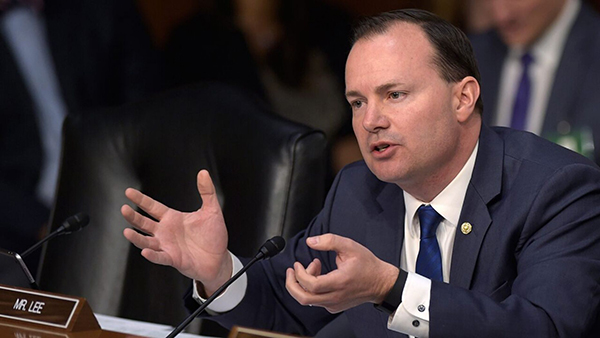 Lee added: “That means no traveling or voting. But, I will continue to make sure Utah’s voice is heard as we shape the federal response to the coronavirus through phone, text, email and whatever other means are available.”

Sen. Cory Gardner, R-Co., is in self-quarantine, which he announced March 17. Gardner had contact with a constituent who later tested positive for coronavirus.

“While I am not showing any symptoms at this time, I have made the decision to self-quarantine out of an abundance of caution with an effective date of March 11th at the recommendation of the Tri-County Health Department,” Gardner said in a statement last week.

Sen. Rick Scott, R-Fla., is also in self-quarantine, after having interacted with Brazilian President Jair Bolsonaro, who is being monitored for coronavirus.

Scott has said he was feeling fine after interacting with Bolsonaro but was self-quarantining out of an abundance of caution.

“I’m doing this out of precaution,” Scott told Fox News’ Neil Cavuto. “I want to make sure that I don’t have an adverse impact on anybody else. So, my doctors have told me that I have a low risk, that I don’t need a test since I don’t have any symptoms.”

Sen. Lindsey Graham, R-S.C., was in self-quarantine after attending an event at Mar-a-Lago earlier this month with Bolsonaro and a member of the Brazilian president’s delegation who later tested positive for the novel coronavirus.

Graham was tested for COVID-19, and revealed last week that his test was negative, after having been in self-quarantine.

“I was just informed by [Dr. Monahan], the head of the House Physicians Office, that my coronavirus test was NEGATIVE. I am very grateful and like everyone else will follow the best practices to stay negative,” Graham tweeted. “I look forward to getting back to work with my Senate colleagues and President Trump to contain this virus and stabilize our economy. Thank you very much for all the prayers and well wishes!” 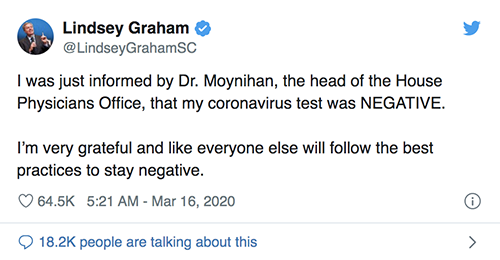 Sen. Ted Cruz, R-Texas, was in self-quarantine earlier this month after having attended the Conservative Political Action Conference outside of Washington, D.C., after an attendee later tested positive.

More than 62,000 US health care professionals have had Covid-19, CDC says