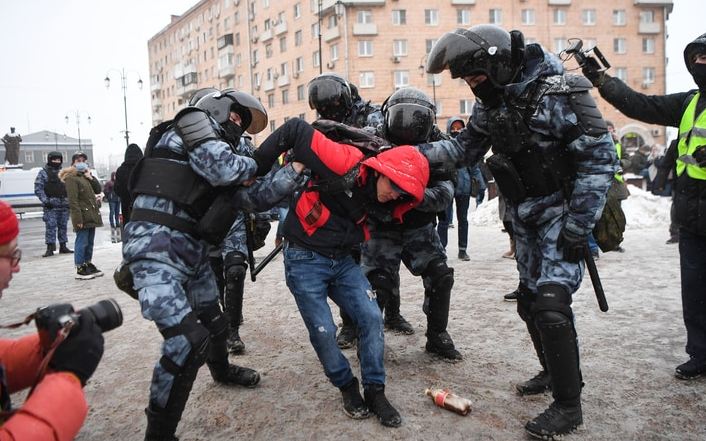 Moscow Record numbers of protesters were detained in Russia on Sunday, as demonstrations erupted across the country in support of detained opposition leader Alexey Navalny.

At least 5,045 people were detained, with more than 1,600 in Moscow alone. That marks a record-high in detentions since 2011, when OVD-Info, an independent site that monitors arrests, started recording such figures.
Among those detained on Sunday was Navalny’s wife, Yulia Navalnaya, who was later released.
Navalny’s team has said that the “next stop” for demonstrations will be on Tuesday, when a Moscow court considers Navalny’s case on fraud charges and establishes whether his suspended sentence should be replaced with a real jail term.
“Today’s protest is over, but we continue to fight for Alexey Navalny’s freedom,” the team posted on their Telegram channel at 6:20 p.m. local time.
Navalny was detained on January 17, moments after arriving in Moscow, following months of treatment in Germany after being poisoned in August 2020 with nerve agent Novichok. He blamed the poisoning on the Russian government, an allegation the Kremlin has repeatedly denied.