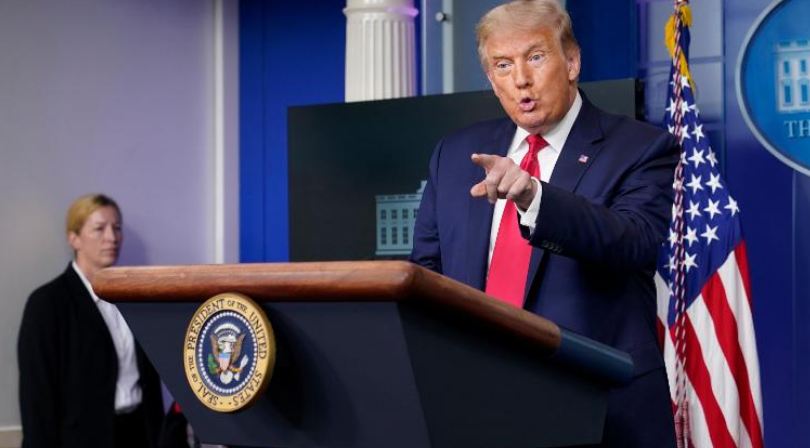 Trump ridiculously invoked the former British Prime Minister Winston Churchill and the President Franklin Delano Roosevelt at a Thursday night rally, claiming that like them, he had tried hard to calm public panic in a dark hour. It was a historically illiterate gambit, since unlike Trump in the pandemic, both statesmen leveled with their people about grave national crises.
But it reflected his struggle to explain his failure to tell the American people the truth about the seriousness of the virus — even though he told Bob Woodward in interviews for his new book in February that it was “deadly stuff.” In a low-energy news conference earlier in the day, Trump doubled down on falsehood, declaring that “I did not lie” when he warned Woodward the pathogen was worse than the flu while publicly comparing it to the seasonal illness.
MORE CNN COVERAGE
‘Play it down’: Trump admits to concealing the true threat of coronavirus in new Woodward book
‘Dangerous’ and ‘unfit’: Trump’s former national security advisers say he has ‘no moral compass’
Why Jared Kushner suggests reading ‘Alice in Wonderland’ if you want to understand Trump
New Trump-Kim letters provide window into their ‘special friendship’
In one stunning moment, he said that if the Washington Post reporter, whose book “Rage” comes out Tuesday, was so concerned about what was said in their taped conversations, he should have gone to the “authorities” so they could prepare the country. Of course, under the Constitution, the President is the ultimate authority and whether Trump likes it, the buck stops with him for the pandemic and every other national crisis.
“I don’t want to jump up and down and start screaming death, death,” Trump said, after Vice President Mike Pence bizarrely suggested Trump’s negligence in fact typified a British propaganda campaign that was never widely used during the war and has become part of marketing kitsch in recent years: “Keep Calm and Carry On.”
At his Michigan rally, Trump jumped on the metaphor, comparing himself to the wartime prime minister.
“We have to be calm. We don’t want to be crazed lunatics. … When Hitler was bombing London, Churchill, a great leader, would oftentimes go to a roof in London and speak. And he always spoke with calmness,” Trump said, mangling the history of Churchill’s late night trips to view the raids with his separate radio addresses to the British people.
Trump's historic dereliction of duty laid bare
Trump’s historic dereliction of duty laid bare
The comparison doesn’t hold up since Churchill left his country in no doubt of the challenge ahead when he became prime minister in 1940, warning of an “ordeal of the most grievous kind” and adding, “We have before us many, many long months of struggle and suffering.” Trump never came close to a similar steeling of national resolve at the start of the pandemic. His choice to look away from the threat and hope it would just pass actually has more in common with another British Prime Minister of the era, Neville Chamberlain, who elected not to confront the rising Nazi menace in 1938 in appeasement policies that many historians believe squandered a chance to stop Adolf Hitler before he reached a point of maximum danger.
The President also ludicrously compared himself to Roosevelt, who told Americans in his inaugural address in 1933 that “the only thing we have to fear, is fear itself.” The quote was ripped out of context and is a poor match for Trump’s denialism over the coronavirus. Unlike the current President’s conduct in this crisis, Roosevelt didn’t ignore the banking meltdown that he faced in the middle of the Great Depression. He explained it in understandable but powerful language to Americans and summoned them to a great national effort. Trump, by contrast, said that the pandemic wouldn’t be a great problem and would just disappear, even though he knew full well how serious it was.

Why experts are concerned about India's low death toll

Brazil reports more than 11,000 new coronavirus cases in past 24 hours