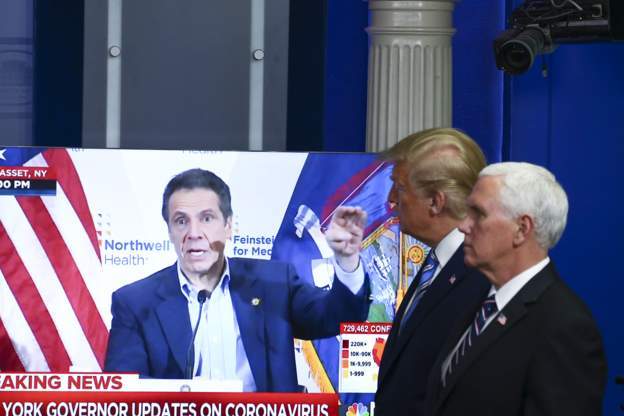 Reporters saw clips selected by the White House, including one in which the governor praised the federal government’s “extraordinary efforts”.

In another, Cuomo said that none of the virus’s victims in New York had died because of a shortage of hospital space or ventilators.

While it is true that Cuomo has praised the response at federal level he has also been highly critical.

Governor Cuomo has pushed back against the president’s claim to have absolute power to re-open America’s economy. He insists that New York state should only ease restrictions after more tests, and has pushed for antibody tests to be ramped up.

New York state is experiencing the largest outbreak in America, with nearly a quarter of a million confirmed cases and 13,869 deaths.

US faced with protests amid pressure to reopen

Probably will ‘get worse before it gets better’: A solo Trump at pandemic briefing