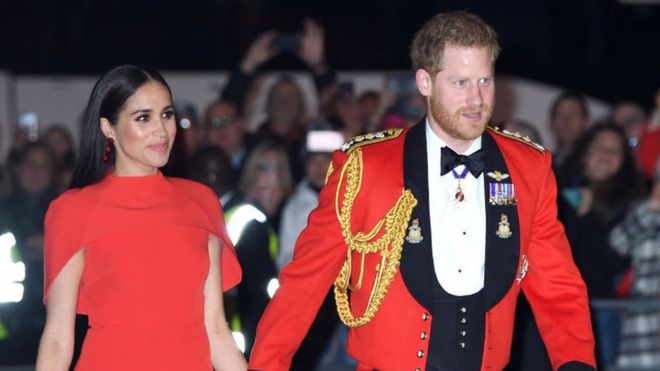 President Donald Trump says the US will not foot the bill for Prince Harry and Meghan’s security amid reports that the pair have moved to the US from Canada.

Mr Trump tweeted he was “a great friend and admirer of the Queen and the United Kingdom”, but added: “They must pay!”

The couple said they had no plans to ask for publicly funded security in the US.

They have reportedly relocated to Meghan’s home state of California amid the intensifying coronavirus outbreak.

They will formally step down as senior royals on 31 March and will no longer carry out duties on behalf of the Queen, but these arrangements will be reviewed after one year.

In a statement released through a spokesperson on Sunday, the couple said: “The duke and duchess have no plans to ask the US government for security resources. Privately funded security arrangements have been made.” 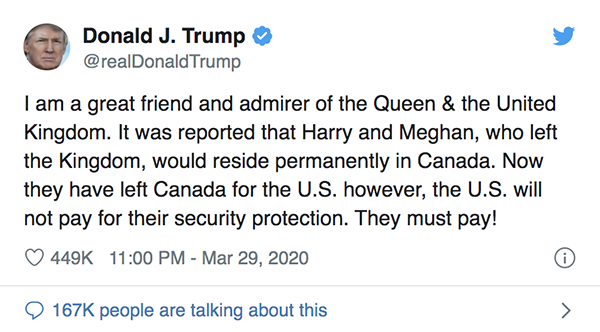 The couple and their son Archie have spent much of this year residing in Canada’s west coast, following a six-week Christmas break on Vancouver Island.

Last month, the Canadian government announced that it would stop providing security assistance to the family “in keeping with their change in status”.

The family moved again last week to the Los Angeles area where Meghan was raised and where her mother, Doria Ragland, now lives, US media reports say.

The president’s announcement comes as the novel coronavirus continues its steady march across the US. There are currently 135,499 confirmed cases – more reported diagnoses than any other country – and there have been 2,381 deaths.

In California, coronavirus cases continue to surge, with 5,565 cases and 121 reported deaths. Last week Governor Gavin Newsom issued a shelter-in-place order – ordering Californians to remain at home except for providing or accessing essential services – among the toughest directives across the country.