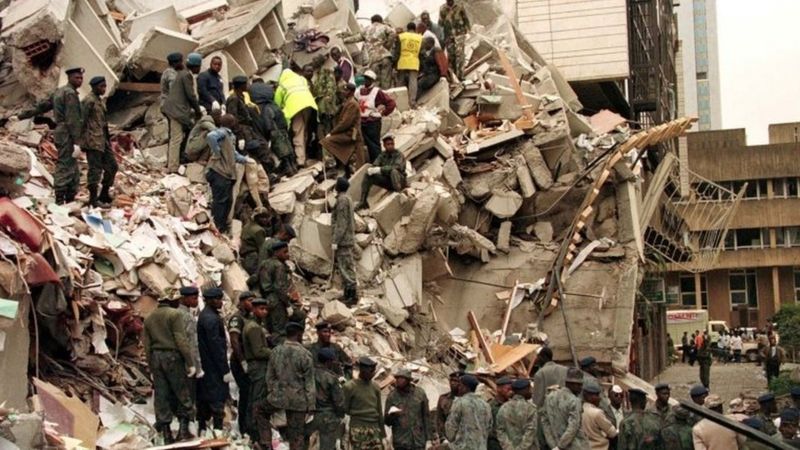 US President Donald Trump has said Sudan will come off a list of state sponsors of terror if it pays compensation of $335m (£259m).

Sudanese Prime Minister Abdalla Hamdok responded by saying the funds had been transferred but there was no immediate US confirmation.

Sudan has been listed since 1993 when al-Qaeda leader Osama Bin Laden lived there as a guest of the government.

The compensation relates to al-Qaeda’s 1998 bombing of US embassies in Africa.

The attacks in Tanzania and Kenya killed more than 220 people and the compensation money is to be paid to “US terror victims and families”, Mr Trump said.

Relations between the US and Sudan have improved since President Omar al-Bashir was ousted after mass street protests last year. Mr Bashir had ruled the conflict-ridden African nation for 30 years.

Dropping Sudan from the blacklist will be very welcome news in the country, where food, fuel and medicine are getting more expensive and scarce, BBC Africa senior correspondent Anne Soy reports.

What did Trump say exactly?
In a tweet, Donald Trump wrote: “GREAT news! New government of Sudan, which is making great progress, agreed to pay $335 MILLION to U.S. terror victims and families.

“Once deposited, I will lift Sudan from the State Sponsors of Terrorism list. At long last, JUSTICE for the American people and BIG step for Sudan!”

The US president has the power to remove a nation from the State Sponsors of Terrorism list. Congress then has 45 days to object.

Sudan is currently one of four countries – along with Iran, North Korea and Syria – on the blacklist.

What is Sudan’s position?
Shortly after the US president’s tweet on Monday, Mr Hamdok announced the money had already been transferred, Sudan’s state TV reports.

It said the move marked “the final requirement to secure” Sudan’s removal from the blacklist.

Mr Hamdok said Sudan was looking forward to the official notification by the US authorities. Being on the list, he said, had cost the country “too much”.

On 7 August 1998, trucks laden with explosives detonated almost simultaneously outside the US embassies in Nairobi and Dar es Salaam.

More than 200 people died in the Kenyan capital and at least 11 in Dar es Salaam, Tanzania’s largest city. Thousands of people were injured in the bombings.

The majority of the victims were civilians.

Was Israel mentioned?
There was no mention by Mr Trump of Sudan having to recognise Israel. There had been reports that this was a condition for Sudan’s removal from the list.

In August, US Secretary of State Mike Pompeo flew to Khartoum from Israel and met the prime minister in part to “discuss Sudan’s commitment to deepening the Sudan-Israel relationship”, according to a tweet he sent out at the time.

In his statement about the meeting, Mr Hamdok spoke about the need for Sudan’s removal from the list, without mentioning Israel.

But in September, the Reuters news agency quoted him as saying that he had told Mr Pompeo that there should be no link between the two issues and the building ties with Israel “needs a deep discussion” within Sudanese society.

Sudan had been a foe of Israel since the latter’s founding in 1948. It famously was the site of a declaration against normalisation with Israel in 1967, when the Arab League, meeting in the capital, Khartoum, swore “no peace with Israel, no recognition of Israel, no negotiations with it”.

Germany advises against international travel until at least June 14