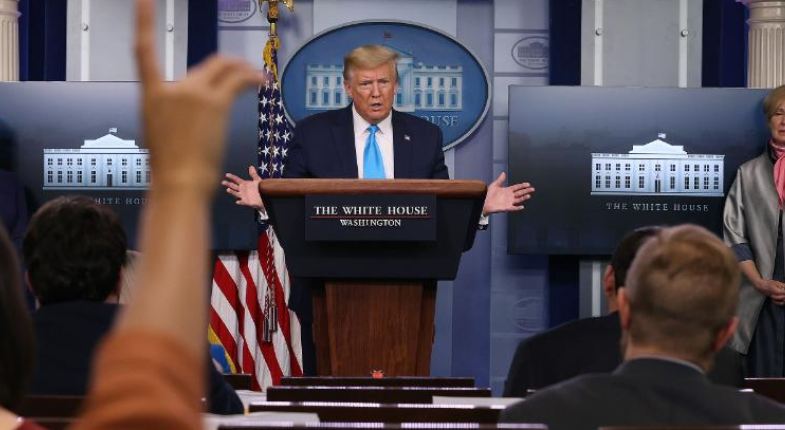 President Donald Trump will watch Easter come and go this weekend without the nation “raring to go” as a new debate buds over whether May 1 is now the target date of revival.

Instead of joining packed pews at his usual 11 a.m. ET service at the stone Bethesda-by-the-Sea in Palm Beach, Florida, Trump said this week he’ll livestream Easter on a laptop from a megachurch in Dallas. And instead of brunch and an egg hunt on the lawn at Mar-a-Lago, Trump is spending the weekend in Washington anxiously looking ahead to the decision he says is the biggest of his presidency.
In late night meetings inside the White House Roosevelt Room, Trump’s advisers this week hashed out what might be necessary to declare the country reopen for business in three weeks’ time, according to administration officials. Even as coronavirus cases are expected to peak soon in the United States, Trump has begun looking forward to the day he can tell the American people the worst is over.
If the curve is flattening, sources say Trump has asked in meetings, shouldn’t some people be allowed back to work? And if the total number of dead is now projected lower, could a reopening happen sooner?
“We’re looking at a date,” Trump said Friday. “We hope we’re going to be able to fulfill a certain date, but we’re not doing anything until we know that this country is going to be healthy.”
In public, Trump has been coy about offering a specific date for reopening the country after he was forced to back off his initial Easter timetable. But internally officials are pushing to do so by next month and there are specific discussions underway about May 1, a person familiar with the talks said.
Lack of coronavirus testing may blunt Trump's planned economic revival
Lack of coronavirus testing may blunt Trump’s planned economic revival
It’s a date few health experts, including those advising him at the White House, feel comfortable endorsing outright. Privately they have cautioned that it could take longer to get testing up to speed throughout the country, including not only for the tests that determine if someone has coronavirus but those that determine if someone has had it without knowing. Those health officials are being assured by other aides that testing will be on par within weeks, but doubts remain, people familiar with the talks said.
Aides already predict an eventual clash between those who want the economy reopened and those who caution a more gradual approach.
Trump insisted Friday he would give both sides a hearing, even as he claimed that “staying at home leads to death also.”
“I will certainly listen. Two sides, remember. I understand the other side of the argument very well,” he said when asked whether he would heed the advice of his health team if they tell him May 1 is unrealistic to reopen the country.
Pressed later what metrics he would use, he simply pointed to his head.
“That’s my metrics,” he said. “I’m going to have to make a decision and I only hope to God that it’s the right decision. But I would say without question it’s the biggest decision I’ve ever had to make.”