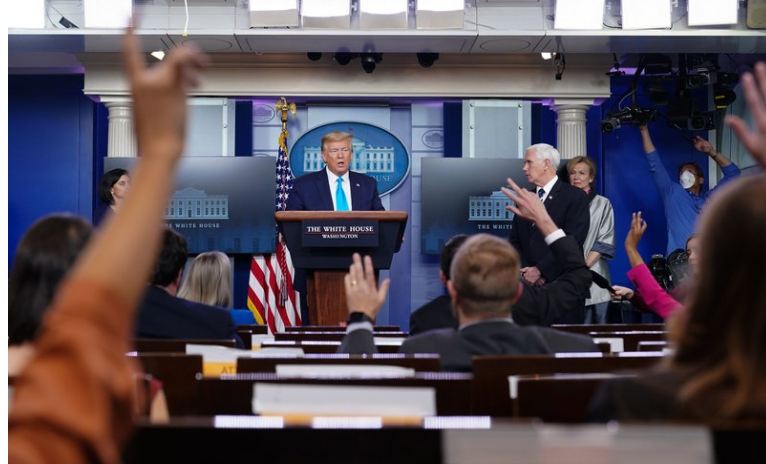 President Trump acknowledged that he learned only recently about a warning earlier this year from a top adviser about the risks of the coronavirus — but he defended his actions on Tuesday at a news conference.

“I couldn’t have done it any better,” Trump said about his and the administration’s handling of the pandemic.

The president’s explanation followed a report about a memo filed by his economic adviser, Peter Navarro, which cautioned about the risks to the United States of the outbreak then mostly afflicting China, where it originated.

Trump said he never saw that document at the time it was submitted, but he conceded it might have been possible that it reached people on his staff. The president downplayed the risks from the coronavirus earlier this year before changing his tune as it then began to ravage the United States.

Trump told reporters on Tuesday that he wanted to be positive — “I’m a cheerleader for this country. I don’t want to create havoc and shock and everything else” — but also that his actions in response to the pandemic came as quickly as practical.

Trump also defended his decisions to shut down travel from China and elsewhere; the president maintained that his response in the latest phase of the pandemic has been stellar.

He read off another list of statistics about the availability of ventilators and the number of tests that Trump said have been performed across the country.

The president said he’ll ask Congress to authorize another $250 billion for employment paycheck relief; lawmakers are expected to agree.

That could bring the amount designated to help employers and workers to around $600 billion.

Trump spoke on Tuesday with the CEOs of a number of major banks, including Goldman Sachs, Bank of America, Citigroup and more, and he said they were supportive of a paycheck protection program and other financial relief he called “an incredible success.”

With more than 383,000 confirmed cases of the coronavirus in the U.S. and over 12,000 deaths, Trump is continuing to ask Americans to maintain social distancing through the end of the month to help control the spread of the pandemic.

Tuesday’s briefing followed a day of staffing shake-ups on the White House communications team, including a move back to the East Wing for Stephanie Grisham, who had been press secretary and communications director.

Trump has also demoted Glenn Fine, the head of the panel of federal watchdogs overseeing the administration’s management of the $2 trillion economic relief package. Fine will return to his position as the principal deputy inspector general at the Department of Defense.

Trump didn’t address Fine’s ouster in detail on Tuesday except to say that he felt suspicious about inspectors general who had been held over from President Barack Obama’s administration.

Many federal inspectors general are presidentially appointed and Senate confirmed for terms that can last through elections. They also oversee offices that include career employees charged with keeping a distance from their agencies to provide oversight of their functions or spending.

Democrats blasted Trump’s demotion of Fine, which was the latest battle in a longer political war over how to monitor how trillions of dollars in pandemic relief are being used.

Brussels Airlines will cut 25% of its workforce