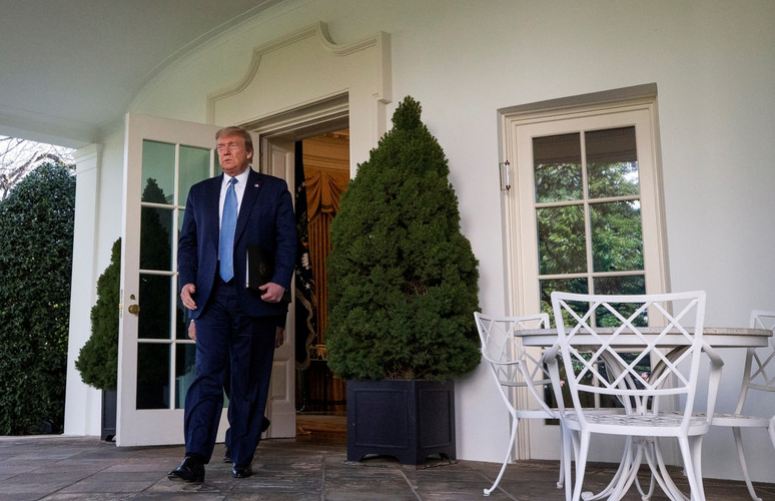 WALL STREET TO TRUMP: KEEP IT SHUT — The White House held a call this morning with top Wall Street titans and other senior bankers and financiers to talk about how to reopen the economy, part of a barrage of phone confabs between President Donald Trump and executives from industries including hospitality, health care, technology, construction, sports and many more.

There was a small problem with the Wall Street call. Actually several problems.

Many of the bankers said they knew nothing about the call until late Tuesday night. Several had quarterly earnings calls this morning that directly conflicted with the timing of the White House summons.

Goldman Sachs CEO David Solomon couldn’t be on the call because of earnings. Neither could JPMorgan CEO Jamie Dimon, though not because of earnings. Bank of America CEO Brian Moynihan was able to dial in right after his earnings call ended. Another senior executive from JPMorgan attempted to get on the call in Dimon’s place, two people briefed on the call told POLITICO, but couldn’t get through for 20 minutes and finally gave up.

One top executive described the call as a “shit show” that produced little of substance. Trump asked several questions, including to Moynihan about how the small business loan program was going. That program is now slated to run out of money soon.

Trump on the call praised the bravery of Morgan Stanley CEO James Gorman, who got Covid-19 but recovered. Gorman said his case was relatively mild and tried to deflect the praise.

Several executives called for more Covid-19 testing, something Trump has been hearing for six weeks from anxious governors, health care leaders and lawmakers. And that was pretty much it for the Wall Street conversation, according to people briefed on the call. “It was really nothing,” one person briefed on the call said.

Beyond the haphazard nature of the call, senior bankers are getting increasingly frustrated with Trump’s approach to the crisis. They say pressure tactics to reopen the economy as fast as possible make no sense if the virus isn’t fully under control and consumers and businesses don’t feel safe to resume anything close to normal activities.

“I really don’t understand how they are communicating on this,” one CEO told POLITICO on condition that neither they nor their firm be named for fear of angering the White House. “He’s got to stop talking about turning the economy back on and start talking about making people feel safe, things that are happening around testing and the health care system. That’s the only way you will really get the economy reopened over a period of time.”

Bankers are also saying similar things publicly on their earnings calls. Moynihan did it today, suggesting that stopping the virus and providing financial support in the meantime should both come before reopening. Dimon made similar remarks Tuesday. Wells Fargo CEO Charles Scharf said there remained a great deal of uncertainty about when it would be safe to fully reopen the economy.

It’s not that bankers don’t want the economy reopened. Many of them are taking huge earnings hits because of massive increases in loan-loss reserves for expected defaults on mortgages, auto loans, credit cards and other products due to lost income from the 20 million or more laid off or furloughed workers in recent weeks. They’d obviously love markets to keep rocketing higher (though they also profit from volatility).

And the economic data continue to be deeply and terrifyingly horrid. Retail sales plunged a record 8.7 percent in March, blowing out the previous record, a 3.7 percent drop in November 2008 during the Great Recession. Pretty much everything fell off a cliff other than grocery shopping driven by virus-fearing hoarders.

Industrial production dropped 5.4 percent, the biggest monthly fall since 1946. New jobless claims number will arrive Thursday morning. They are expected to show another 5 million in new layoffs and furloughs pushing the total to around 22 million in a single month, matching all the jobs created in the last decade. In other words, the economy is in total free fall.

But the answer from much of corporate America — though perhaps not from some frontline businesses like restaurants and bars — is not to panic at these numbers and try and force a hard reboot of the economy on May 1, as Trump seems to want. That could lead to further shutdowns, more virus spread and more panic.

Instead, the preferred approach is take the big hits now, get the virus in check, and restore people’s sense of safety while providing them with as much financial support as possible. Only then can the economy truly start to crawl back toward anything resembling normal.

CAN HE DO THAT? — Trump said at tonight’s coronavirus briefing that he would exercise his “constitutional authority to adjourn both chambers of Congress” to allow him to make recess appointments if they don’t gavel out themselves. “The current practice of leaving town while conducting phony pro forma sessions is a dereliction of duty that the American people cannot afford during this crisis,” he said. Unlike so many Trump zingers with a half-life of barely a single news cycle, this one may trigger a longer debate over presidential powers.