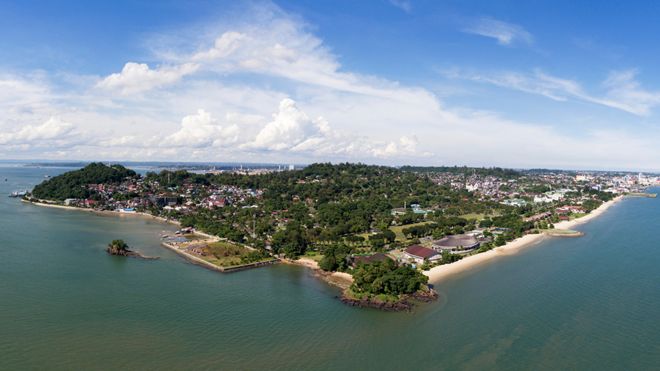 Scientists have identified a potential tsunami risk in the region chosen by Indonesia for its new capital.

The researchers mapped evidence of multiple ancient underwater landslides in the Makassar Strait between the islands of Borneo and Sulawesi.

If the largest of these were repeated today, it would generate tsunami capable of inundating Balikpapan Bay – an area close to the proposed capital.

But the international team cautions against an overreaction.

“We still have a lot more work to do to properly assess the situation. That said, this is something that Indonesian governments probably should have on the risk register somewhere – even if we’re only talking about ‘low frequency, high impact’ events,” said Dr Uisdean Nicholson from Heriot-Watt University, UK.

His British-Indonesian research team used seismic data to investigate the sediments and their structure on the Makassar seafloor.

The survey revealed 19 distinct zones along the strait where mud, sand and silt have tumbled downslope into deeper waters.

Some of these slides involved hundreds of cubic kilometres of material – volumes that are more than capable of disturbing the water column, and of producing large waves at the sea surface. 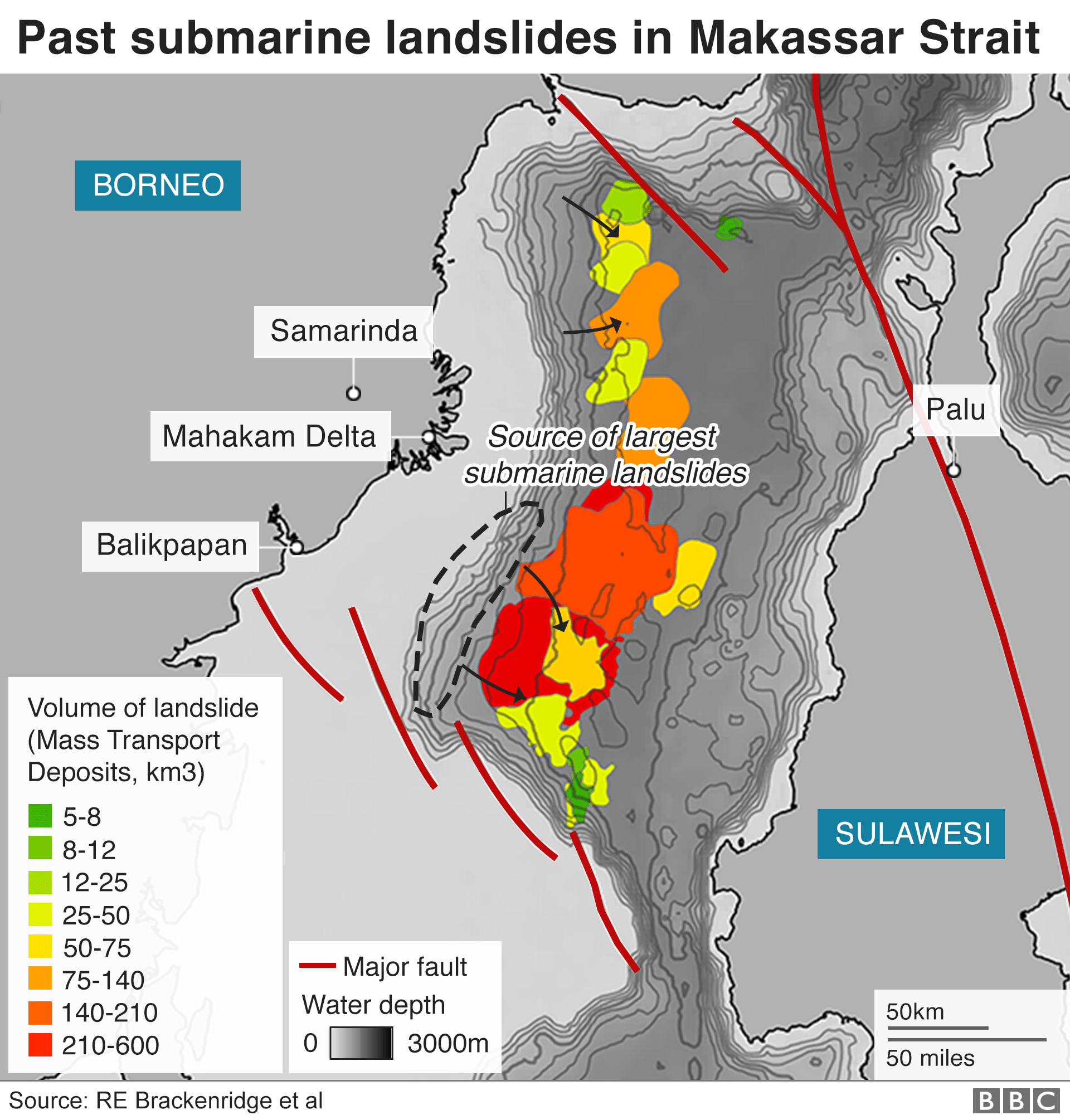 “These landslides – or mass transport deposits (MTDs) as we call them – are quite easy to spot in the seismic data,” explained Aberdeen University’s Dr Rachel Brackenridge, the lead author on the paper describing the research.

“They’re lens-shaped and the sediments within them are chaotic; they’re not the flat, ordered, tramline-like layers you expect to find. I mapped 19 events, but that’s limited by the resolution of the data. There will be other, smaller events I just couldn’t see,” she told BBC News.

All of the MTDs are on the western side of the deep (3,000m) channel that runs through the Makassar Strait. And they’re also predominantly to the south of the outlet delta for Borneo island”s Mahakam River, which is discharging millions of cubic metres of sediment every year.

The team thinks this material is picked up by currents in the strait and then dumped where the shallower parts of the seafloor fall away into the deep.

The steep piles of sediment sculpted over time ultimately collapse downslope, triggered perhaps by the shaking from a local earthquake. This is Indonesia after all.

What the team cannot say right now is when the submarine landslides occurred. The researchers’ best estimate is within the current geological period – so, within the last 2.6 million years.

Cores extracted from the MTDs could better constrain their age and the frequency of slope failure – and funding is being sought to do just this.

The team plans also to visit the coastal areas of Borneo to look for physical evidence of ancient tsunami and to model the type of waves that could hit the coastline.

Ben Sapiie, from the Bandung Institute of Technology in Indonesia, said: “This research enriches the Indonesian geological and geophysical communities’ knowledge about sedimentation and landslide hazards in the Makassar Strait. The future of earth sciences research is using an integrated, multi-scientific approach with international collaborators.” 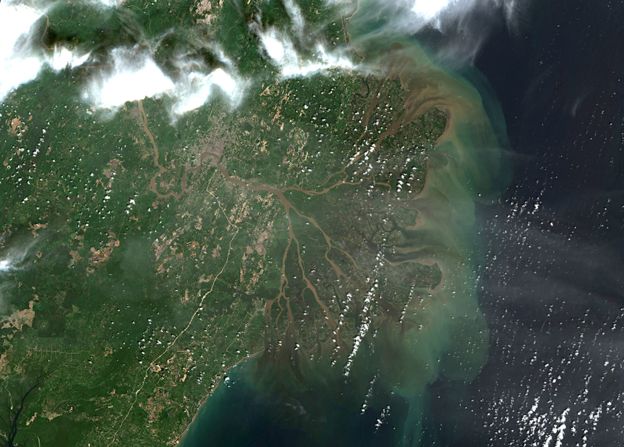 Prof Dan Parsons is director of the Energy and Environment Institute at Hull University. His group also studies submarine landslides around the world.

He told BBC News: “What is interesting here is how these sediments are being re-worked and piled up over time in the Makassar Straight by oceanic currents.

“This sediment builds up and then fails when it gets unstable. What is then key is identifying the tipping point, or the trigger, that results in the failure. We have been doing similar work in fjords, exploring the multiple triggers and the magnitude and frequency of the failures that can occur.

“The biggest failures and the largest tsunami will likely occur when sediment delivery rate is very high but the triggers are infrequent, such that when the failures occur they are very large.”

Indonesia experienced two landslide-driven tsunami events in 2018 – when the side of the Anak Krakatau volcano collapsed and separately when a quake triggered slope failures in Sulawesi’s Palu Bay.

So awareness is certainly growing that tsunami can come from sources other than a seafloor megathrust earthquake like the one off Sumatra in 2004 which wreaked havoc right around the Indian Ocean.

President Joko Widodo announced last year that Indonesia would move its capital from Jakarta to Borneo.

The new administrative centre is to be built across two regencies – Kutai Kartanegara and North Penajam Paser – in East Kalimantan province, close to the existing cities of Balikpapan and Samarinda.

The seafloor study has been published by the Geological Society of London. 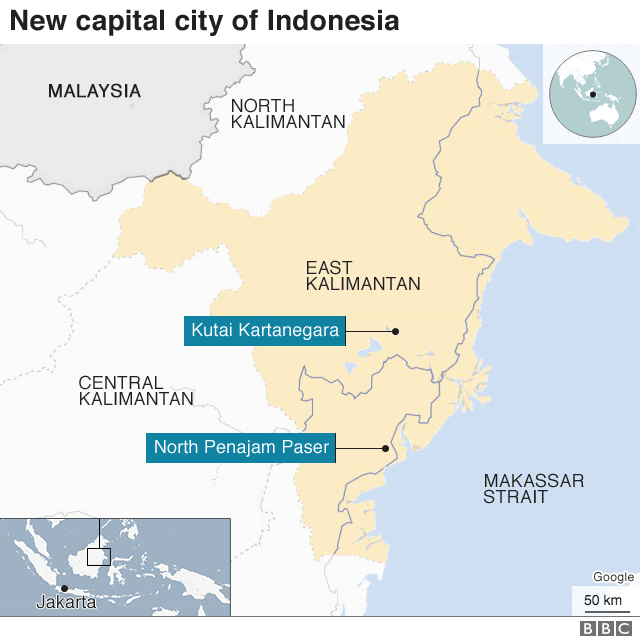