Doctors and other health professionals in Spain have taken to Twitter in an effort to consult patients online as the country faces another two weeks of lockdown.

A range of specialists, from urologists to dermatologists to ophthalmologists, are using the social network to field concerns from Spaniards stuck at home during the COVID-19 pandemic.

Sergio Alique, a dermatologist from Cuenca, told Euronews that as many as 100 dermatologists had launched a common account – @dermosolidaria – after receiving hundreds of private requests.

“The idea is to help patients who have dermatological problems (which are not extremely urgent), but who do require priority attention,” he said.

“[This will help] avoid unnecessary trips to health services so as not to overload them further.” 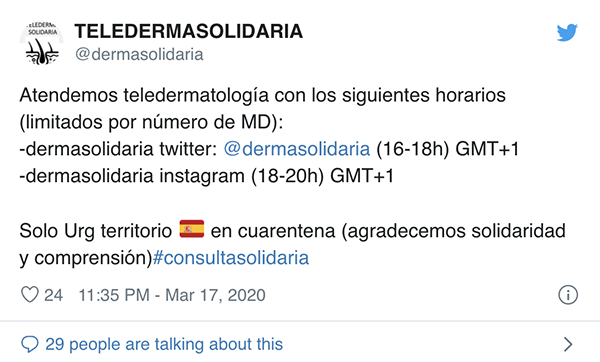 Spain’s health system has been overwhelmed by the coronavirus epidemic, which saw it overtake Italy on Wednesday in terms of daily deaths. It has now had more fatalities than China.

Videos and photos of two hospitals in the Spanish capital circulate where patients can be seen, many of them connected to oxygen tanks, crowding corridors and emergency rooms.

At the 12 de Octubre University Hospital, patients are seen waiting on the floor for a free bed. The hospital says the patients have since been housed elsewhere.

On Wednesday, the number of infected medical personnel was almost 6,500 nationwide, according to health authorities, representing 13.6% of the country’s total 47,600 cases and about 1% of the health system workforce. At least three health workers have died.