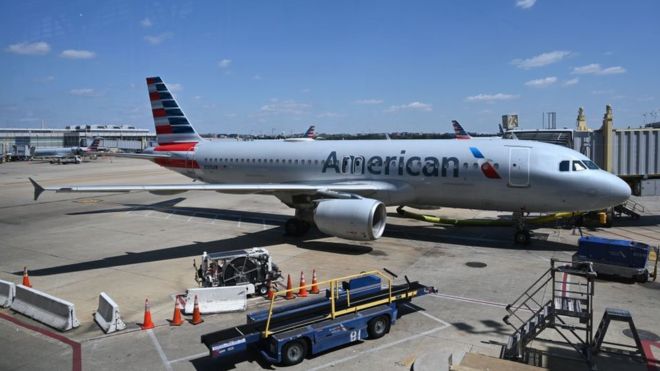 The US has agreed a roughly $25bn (£19.8bn) rescue package for 10 of the country’s biggest airlines as travel plunges due to the coronavirus.

American Airlines, United, Delta and Southwest are among the recipients.

The money is to be used for payroll and will be provided through a combination of low-cost loans and direct grants.

Congress had planned for the aid as part of its roughly $2tn emergency relief bill last month but airlines had been negotiating the deal.

Rescue package
Under terms outlined by the US Treasury Department last week, major airlines were expected to repay about 30% of the payroll funds they receive.

Congress had also included conditions when it crafted the emergency aid law, such as prohibitions against involuntary furloughs and bars on reducing worker pay and benefits until the end of September.

US Treasury Secretary Steven Mnuchin on Tuesday said the airline deal would “support American workers and help preserve the strategic importance of the airline industry while allowing for appropriate compensation to the taxpayers”.

“We look forward to working with the airlines to finalise the necessary agreements and disburse funds as quickly as possible.”

American Airlines boss Doug Parker said his company expects to receive more than $10bn in support, including$5.8bn in payroll funds, of which it expects about $4.1bn is set to be a grant. The firm will also apply for a government loan through a different programme.

“The support our government has entrusted to us carries immense responsibility and an obligation that American Airlines is privileged to undertake,” American chief executive Doug Parker said.

Other companies set to receive aid include Southwest which said it would receive a total of $3.2bn, including $2.3bn in payroll support.

Bailout concerns
Global airlines group IATA has forecast more than $300bn in losses related to the coronavirus and warned that some 25 million jobs are at risk.

In the US travel has dropped more than 95%, leading to widespread cancellations, fleet groundings and billions in losses.

However, the industry had faced criticism for spending money in recent years to repurchase shares, instead of investing the money back into the company or it workers.

Politicians have also been worried that bailouts of private firms will lead to controversy as happened during the 2008 financial crisis.

The labour union that represents flight attendants, the Association of Flight Attendants-CWA International, said it believed Congress had intended airlines to receive all $25bn in payroll support in the form of grants but it nevertheless welcomed news that the industry and the White House had come to terms.

“We are closer than ever to almost a million airline workers knowing they will receive their pay cheque and keep their healthcare and other benefits, at least through September,” the group’s president, Sara Nelson, said. “This is an unprecedented accomplishment – a truly workers-first stimulus.”

At the beginning of April, 250 trades unions and environmental groups signed an open letter opposing unconditional bailouts of airlines.