Home > News > Video: Frankfurt police play “Circle of Life” on the street – the reactions are divided 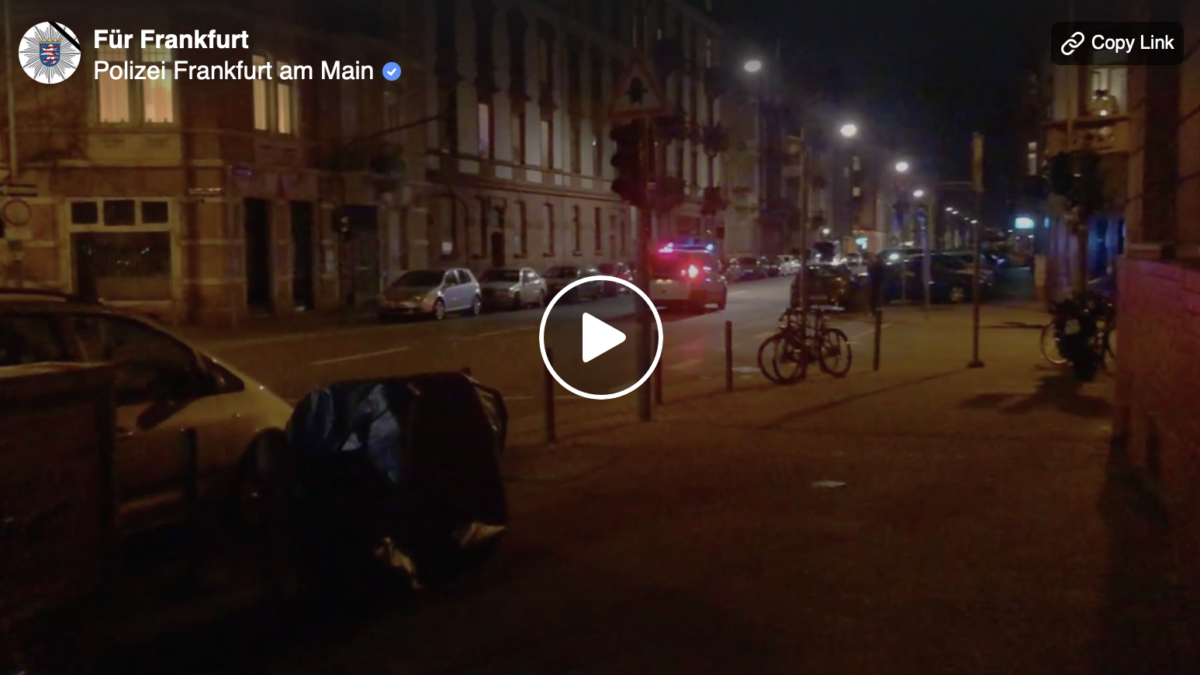 In order to thank those who remain at home in the Corona crisis, the police in Frankfurt play music for the residents. A video shows the action – the reactions are split.

Frankfurt – It is already dark in Frankfurt when suddenly a voice breaks through the silence of the night. It is none other than Sir Elton John, the “Circle of Life”, the title song from “The Lion King”, for the best. But of course not live on the streets of the Main metropolis – it booms out of the system of a police car that rolls through the Textorstrasse in Sachsenhausen at walking speed and with flashing blue lights. A few passers-by who are still on the sidewalks stop, others stand on their balconies and listen to the music.

The corona virus has largely brought public life to a standstill in Frankfurt. Those who can stay at home – to protect themselves and others from the spread of the Sars-CoV-2 virus. Accumulations of more than two people in public space are forbidden in the Main metropolis as in all of Germany *. Since the citizens of Frankfurt usually go with them and stay at home, the Frankfurt Police Headquarters has now decided on a special action: a little evening music to entertain those who have stayed at home and to express their thanks. A corresponding video was released on Monday (30.03.2020) by the officials on social networks.

“Our colleagues have been working tirelessly for you for days. You receive a lot of praise and encouragement for this. That feels good. That gives strength. Frankfurt – together against Corona. You who stayed at home for #FlattenTheCurve, this is for you, ”the Frankfurt police wrote on Facebook under the video.

Frankfurters thank the police for their efforts in the corona crisis

The Frankfurt officials could have got inspiration from colleagues from Spain: In a village on the island of Mallorca, several police officers recently gave a small private concert on the alley. They danced and clapped across the street, many residents sang out of their windows, and one of the policemen even picked up the guitar himself. A video of the happy action went viral. In Spain, which is particularly badly affected by the Corona crisis, there has been a strict curfew for a long time.

The action of the Frankfurt police is also well received by many. “So now it has happened, now I cry,” writes a user on Twitter. Another commented: “An absolutely wonderful action !!” And a user on Facebook writes: “Thank you for your tireless efforts!”

Action by the police in Frankfurt: criticism of the music selection

A user describes the song selection on Twitter as “macabre” and asks whether one should now say to relatives who have lost someone: “Well, that’s the circle of life”. . Another user recommends: “Please rethink the song selection. Oh yes, before you go wrong again: Time to say goodbye doesn’t work either. ”

Police Frankfurt on music campaign: “Thank you to the people”

The Frankfurt police explain on request: “Each song text offers scope for text interpretations. For us, the focus was on: 1. The scene with the young Simba, which is presented by Rafiki, the Mandrill, the animals, from the Disney film “The Lion King”. This is the picture most people call when asked about this song. 2. The stanza: ‘You should never take more than you give’ – transferred to the current situation and that all people have to hold together / act together to contain Corona. ”The campaign should“ thank the people who help Join #FlattenTheCurve and #StayAtHome and stay at home ”.

The people of Frankfurt already have a few suggestions for improvement for the next musical intervention by the police: A Twitter commentator demands: “Can you wish for songs? Please Abba in the thorn bush! ”Another remarked:“ Bruce Springsteen would also be great … ”And a third one wishes“ The Hesse is coming ”from the Rodgau Monotones. When asked whether further such actions are planned to cheer people up with the coronavirus, Isabell Neumann, spokeswoman for the police headquarters in Frankfurt, replies: “Currently not.”