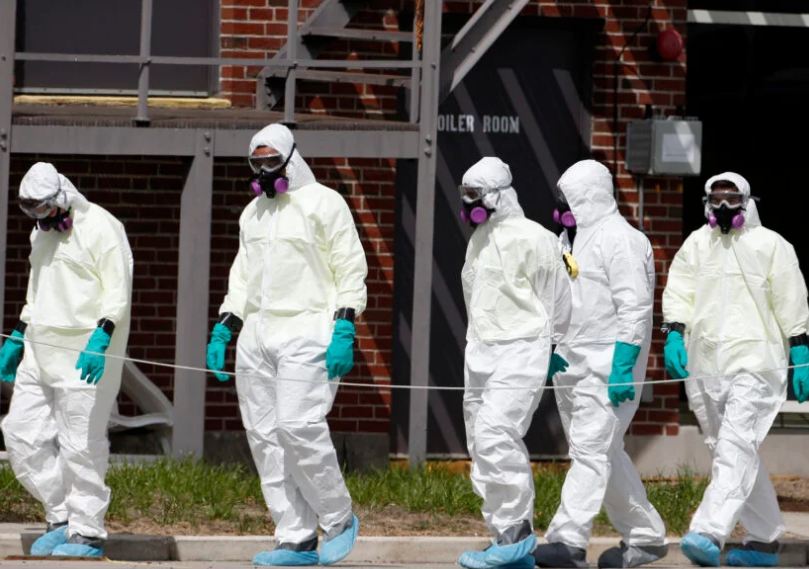 Massachusetts Gov. Charlie Baker promised answers Tuesday afternoon on the outbreak of the novel coronavirus at the Soldiers’ Home in Holyoke, where 13 veterans have passed away since last week.

The governor said the state’s primary focus is on stabilizing the health and safety of residents and staff at the state-run home, where a variety of resources, including a clinical command team and the National Guard, have been deployed since the reality of the outbreak came to light. A hotline has been set up for families to get information about their loved ones.

“We will get to the bottom of what happened and when and by who,” Baker said.

Earlier on Tuesday, Holyoke Mayor Alex Morse said in a Facebook Live video that on Friday the city’s board of health nurse was notified that one case of coronavirus at the Soldiers’ Home had “turned into several cases.” The next day, Morse said he received an anonymous tip, “describing the conditions and the gravity of the situation at the Soldiers’ Home.”

The mayor alleged that the facility didn’t respond to his requests for more information on Saturday, and, on Sunday, he reached out directly to the home’s superintendent, Bennett Walsh.

“I was shocked on the phone call when the superintendent let me know that there had been eight veteran deaths between Wednesday and Sunday,” Morse said. “Without any public notification, without any notification to my office, and also just no notification to the state government that oversees this facility in the first place.”

Morse said he contacted the Baker administration on Sunday out of concern that action wasn’t being taken.

“These are people who have given their all, risked their lives to protect all of us, and they deserve better, frankly,” he said of the veterans at the facility.

It was clear, Morse said, that the state, which runs the Soldiers’ Home, was not aware of the gravity of the circumstances.

“I was incredibly disappointed on the call on Sunday with the superintendent,” he said. “There was a clear lack of urgency on that phone call, where we were repeatedly told that these were folks who had underlying health conditions. I’m not disputing that people had underlying health conditions or that the folks that passed away are in a demographic that is less able to fight this virus, but that’s certainly not an excuse for improper isolation of those folks that did test positive.”

Marylou Sudders, the state’s secretary of Health and Human Services, said Tuesday the deaths and cases were not reported through the state’s communication chain.

Officials said at least six of the 13 residents that died tested positive for COVID-19, with five results pending. One person tested negative, and another individual died prior to being tested. All the surviving residents and staff members at the home are being tested for the novel coronavirus, Sudders said.

Walsh was placed on paid administrative leave Monday, and Val Liptak, a nurse and the chief executive of Western Massachusetts Hospital, is now running the Soldiers’ Home.

“We will figure out what happened and we will deal with that,” Baker said.

The governor said late Sunday was the first time his administration was made aware of what was going on at the Soldiers’ Home.