Home > News > World > What did Trump say about the WHO? 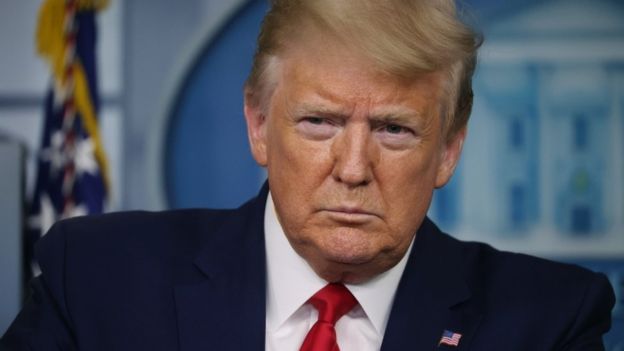 During a press conference on Tuesday, Mr Trump said he was reluctant to discuss further but the US might be on track for fewer deaths than projected.

It was thought that as many as 240,000 people in the US could die in the pandemic, according to the president’s task force.

He also said the US might be getting to the top of the “curve” of the outbreak.

During the briefing, he also attacked the World Health Organization (WHO), saying it had issued bad advice and had been too focused on China.

“The WHO really blew it. For some reason, funded largely by the United States, yet very China centric,” he said.

He also said the US would be withholding money meant for the WHO.

What’s happening elsewhere in the world?

UK Prime Minister Boris Johnson has spent his second night in the intensive care unit in hospital
Mauro Ferrari, the head of the European Research Council and the EU’s top scientist, has resigned citing Brussels’ “disappointing” response to the pandemic, the Financial Times reports
Coronavirus cases reported in China rose to 62, double Tuesday’s total. Asymptomatic cases rose to 137
Japan has woken up to its first day under a month-long state of emergency
Australia’s parliament is set to meet to pass a A$130bn (£65bn; $80bn) wage support package, designed to accommodate about half of Australia’s usual workforce
France’s death toll passed 10,000 after a rise in the number of fatalities at nursing homes