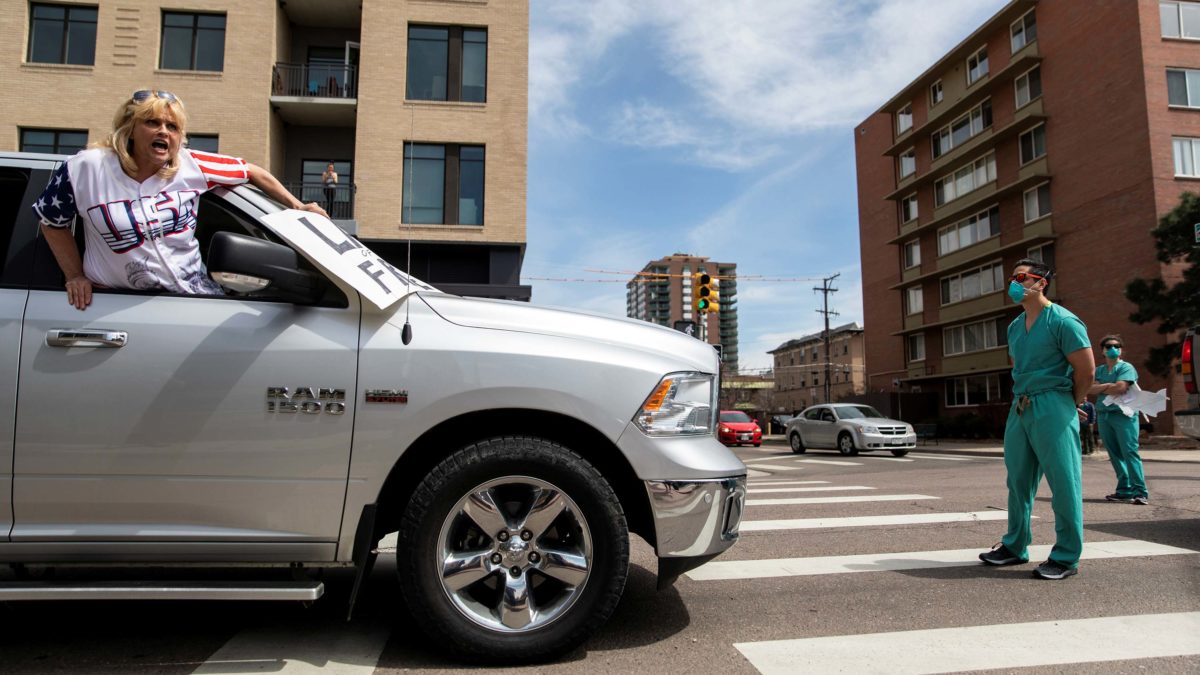 Health care workers stand in the street in counter-protest to hundreds of people who gathered at the State Capitol to demand the stay-at-home order be lifted in Denver, Colorado, U.S. April 19, 2020. REUTERS/Alyson McClaran MANDATORY CREDIT. NO RESALES. NO ARCHIVES

“Freedom over fear.” That’s just one of the messages from groups of protesters who ignored social distancing guidelines to voice their opposition to stay-at-home orders in several US states this weekend. President Donald Trump is coming under scrutiny for encouraging the demonstrations and seemingly fomenting rebellion, flouting his government’s own social distancing policy. “They have got cabin fever, they want to get back,” Trump said during yesterday’s White House press briefing.

Meanwhile, Brazil’s President Jair Bolsonaro took Trump’s tactic a step further, joining a rally to end quarantine measures and cheering on protesters who called on the military to shut down congress and the supreme court.

As calls grow for a return to normal life, health officials warn that additional waves of the virus are virtually inevitable, and that letting up on social distancing too early will only make matters worse. Still, many hope antibody tests could provide the key to reopening.

New York will begin the “most aggressive” antibody testing survey in the US over the next week, according to Gov. Andrew Cuomo, who warned was “only halftime” in the battle against the “beast.” Cuomo and other governors from both sides of the aisle have disputed Trump’s claims that there’s enough coronavirus testing.

Elsewhere, Chile is set to become the first country to issue “immunity cards” to those who recover from the virus, allowing them to go back to work. But the World Health Organization says there’s no evidence that antibody tests can determine immunity.

Here’s what else is important today…

UK government under fire: Hospital leaders have criticized the government for making announcements about personal protective equipment (PPE) supplies that cannot be delivered amid “critically low” stocks in some health trusts (and a shipment of PPE from Turkey, due yesterday, still hasn’t arrived).

Sex workers struggle: After some controversy, sex workers in Japan are now eligible to apply for financial aid from the government, under certain conditions — a move some activists have hailed as a sign of progress for an industry that has long suffered social stigma. But sex workers say it’s not enough to live on.

Beaches begin to reopen: Some beaches are beginning to reopen in Australia, but things aren’t back to normal just yet. The reopening of beaches in Jacksonville, Florida was met with less caution. Crowds cheered as police took the barriers down, and people were seen swimming, biking, surfing and fishing.

"The battle is not won," Italy's Health Minister warns, as Lombardy prepares to ease restrictions

US issues new travel alert on Tanzania over Covid-19