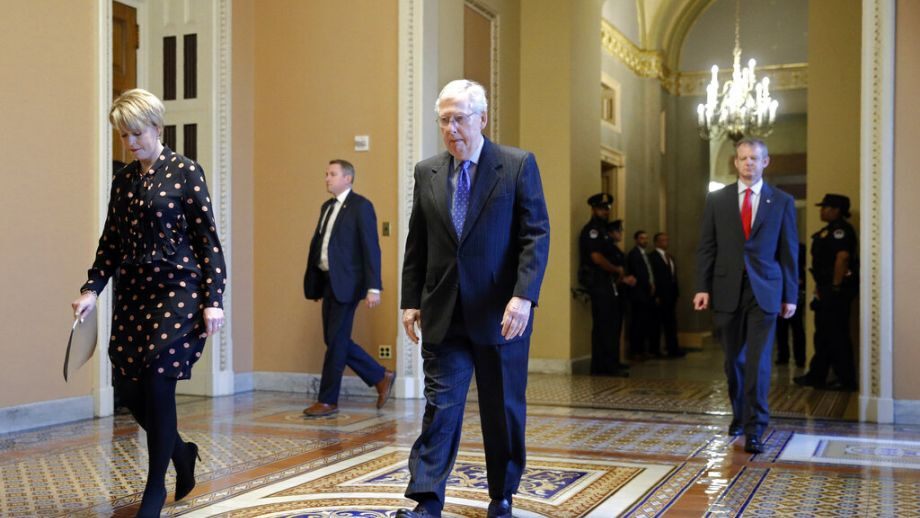 White House and Senate leaders reached a historic deal shortly after midnight Wednesday on a massive $2 trillion coronavirus relief package for workers and businesses, although support in the House of Representatives remained uncertain as one member openly criticized the plan.

The bipartisan breakthrough in the Senate capped days of heated negotiations that had nearly been derailed by last-minute demands from House Democrats.

“Ladies and gentleman, we are done,” White House legislative affairs director Eric Ueland announced as he left the office of Senate Majority Leader Mitch McConnell, R-Ky., near midnight. “We have a deal.”

Ueland told reporters that “much of the work on bill text has been completed, and I’m hopeful over the next few hours we’ll finish what’s left and we will circulate it early in the morning.”

Senate Minority Leader Chuck Schumer, D-N.Y., said the bill amounts to “unemployment compensation on steroids,” and that every American who is laid off will have their missed salary remunerated. That provision will enable companies to stay afloat and immediately bring back those employees when things are safe‬, Schumer said.

The unprecedented economic rescue package would give direct payments to most Americans, expand unemployment benefits and provide a $367 billion program for small businesses to keep making payroll while workers are forced to stay home. 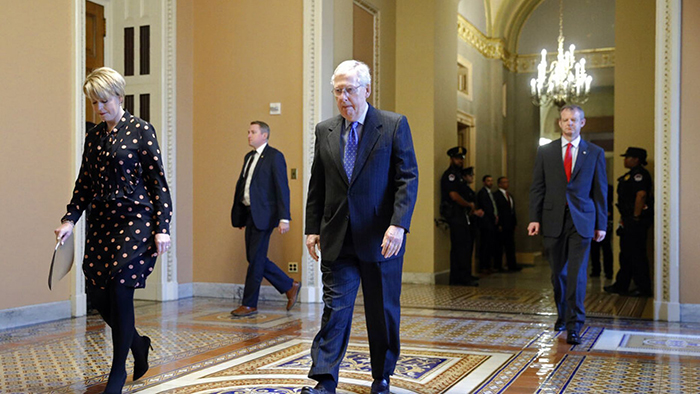 One of the last issues to close concerned $500 billion for guaranteed, subsidized loans to larger industries, including a fight over how generous to be with the airlines, given that Democrats wanted them to abide by new carbon emissions restrictions. Hospitals would get significant help as well.

In a letter to his colleagues, Schumer remarked, “Democrats are ready to give our unanimous consent to speed up the consideration of the bill and get the job done.“ That means that if there are no objections from Republicans, the Senate could clear the bill without a formal roll call vote. Parliamentarily, that is the fastest way to move something on the floor.

A senior GOP source told Fox News contributor and Townhall.com editor Guy Benson that the move was a face-saving exercise by Schumer, and that he was trying to “take credit” for a GOP bill that he filibustered for “small ball” alterations. Democrats, the source said, couldn’t drag the situation out much longer; economic conditions have worsened dramatically, and President Trump’s approval rating has risen.

McConnell said the Senate will meet at noon on Wednesday, but did not set a time for a vote. By rule, the procedural vote to begin debate on the coronavirus package would happen at 1 p.m. ET, unless the Senate scraps that vote‬.

“Democrats are finally taking ‘yes’ for an answer,” McConnell said in his remarks on the Senate floor early Wednesday morning. “Help is on the way.”

“After days of intense discussions, the Senate has reached a bipartisan agreement on a historic relief package for this pandemic,” he continued. “It will rush new resources onto the front lines of our nation’s health care fight. And it will inject trillions of dollars of cash into the economy as fast as possible to help Americans workers, families, small businesses and industries make it through this disruption and emerge on the other side ready to soar.”

Treasury Secretary Steven Mnuchin, who was smiling after McConnell left the floor, told reporters: “This is a very important bipartisan piece of legislation that is going to be very important to help American workers, American business and people across America. So, we couldn’t be more pleased. I’ve spoken to the president, many times today, and he’s very pleased with this legislation, and the impact that this is going to have.”

Concerning the House, Mnuchin remarked, “I can’t speak for the Speaker. I hope she takes it up and she passes as-is. We need, we need this to get working for the American people. And, again, there are a lot of compromises. It’s terrific bill, and it was a great accomplishment on everyone.”

Michigan independent Rep. Justin Amash, who recently left the Republican Party, signaled that he might essentially delay consideration of the bill in the House. The lower chamber may seek to pass the legislation via unanimous consent because many members are not in Washington — but a single member can ruin that plan. 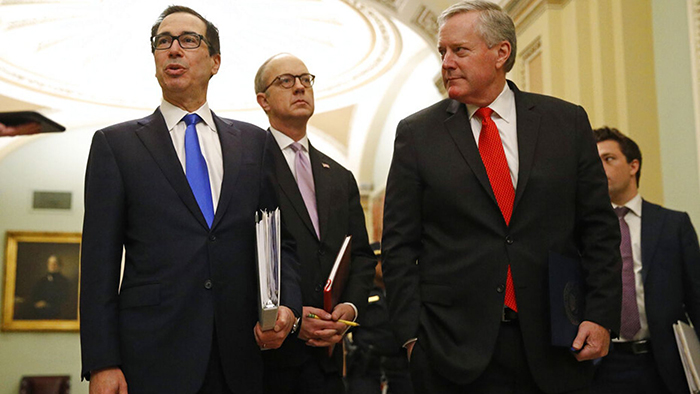 The House used unanimous consent during the 1918 flu pandemic as well.

“This bipartisan deal is a raw deal for the people,” Amash tweeted. “It does far too little for those who need the most help, while providing hundreds of billions in corporate welfare, massively growing government, inhibiting economic adaptation, and widening the gap between the rich and the poor.”

The deal came hours after President Trump’s top economic adviser said an unprecedented $6 trillion stimulus plan was imminent, including $4 trillion in liquidity from the Federal Reserve and $2 trillion in new money from Congress.

Tensions then abruptly ratcheted back up again on Capitol Hill Tuesday night — with Republican Sens. Lindsey Graham and Steve Daines taking to the Senate floor and calling for an end to negotiations because, as Graham put it, Democrats were “nickel-and-diming at a time when people are dying — literally dying.”

Graham and Daines’ late-night push for an immediate vote on a stimulus bill came after tensions seemingly had cooled in Congress during the day, sending the Dow Jones Industrial Average to its highest point gain in its history as leaders from both parties signaled that an agreement could be within reach.

Shares advanced in Asia on Wednesday after the Dow Jones Industrial Average surged to its best day since 1933 as Congress and the White House neared a deal. Japan’s Nikkei 225 index jumped 5.3 percent, while Hong Kong added 3 percent and Sydney climbed 3.6 percent. Markets across Asia were all up more than 2 percent.

But, the Republicans said late Tuesday, Democrats were still seeking new payouts that were delaying a vote on a final bill.

“In case you’re watching,” Graham said in reference to the president, his voice rising, “tell [Treasury Secretary] Steven Mnuchin to come back to the White House and end negotiations. I think I understand the give-and-take of life and politics, but I’ve been called by two good friends on the Democratic side in the last five or six hours wanting more money. End the negotiations.”

He added: “This bill is $2 trillion. There’s a ton of money in this bill for people who need it, but what we’re doing now is, every special-interest group in town is trying to get a little bit more.”

“Listen, we were told we are at the one-yard line last night to get this done,” Daines, who led the colloquy with Graham, said from the Senate floor. “All I’ve got to say is, the Senate may think it’s at the one-yard line right now, but Montanans are getting sacked. In fact, our unemployment claims in Montana since march 17th, we just looked it up 15 minutes ago, 14,350 Montanans have filed for unemployment in the last week.”

Shortly before Graham and Daines spoke, Trump declared at a coronovirus task force briefing that the country was nearing “the end of our historic battle” with “the invisible enemy” of coronavirus. Trump’s approval numbers hit their highest point ever this week, with 60 percent of Americans approving of his coronavirus response efforts.

The president also sounded an unexpectedly magnanimous note: “I also want to thank Congress, because whether or not we’re happy that they haven’t quite gotten there yet, they have been working long hours. I’m talking Republicans and Democrats, all of them, the House, the Senate. I want to thank Congress because they are really trying to get there, and I think they will.”

Then, Director of the U.S. National Economic Council Larry Kudlow specifically said the new coronavirus bill working its way through congressional gridlock would total $6 trillion: $4 trillion in liquidity from the Federal Reserve and $2 trillion in new money. Typical annual appropriations from Congress in a given fiscal year are around $1.2-4 trillion, with total expenditures roughly $4.3 trillion. 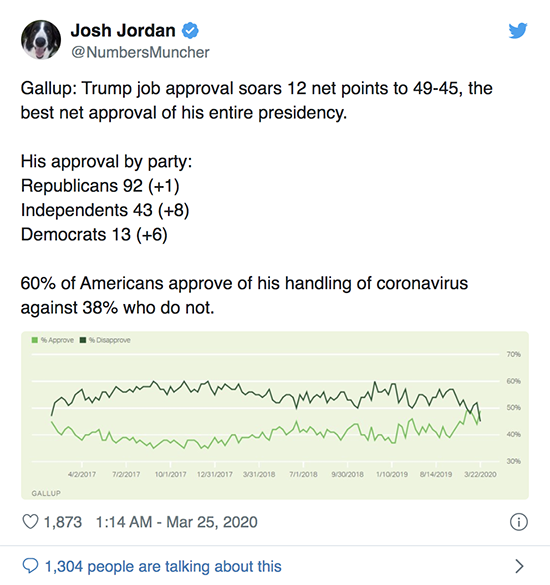 “This package will be the single largest Main Street assistance program in the history of the United States,” Kudlow said, adding that negotiations would continue into the evening but that a vote was imminent.

Meanwhile, there was some good news inside the White House grounds. As the briefing concluded, White House press Secretary Stephanie Grisham, who has been quarantined since coming in contact with Brazilian officials almost two weeks ago and working from home, revealed she has received negative COVID-19 test results and will be back to work Wednesday.

Grisham will return as the Trump administration increasingly has sought to project optimism. The president, who tweeted Sunday that “WE CANNOT LET THE CURE BE WORSE THAN THE PROBLEM ITSELF,” declared at the Fox News virtual town hall that he “would love to have the country opened up and just raring to go by Easter.” 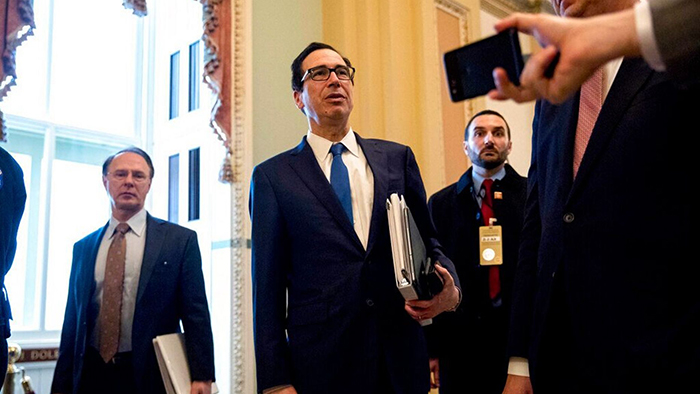 Pressed by Fox News’ John Roberts on the timeline, Trump said at the briefing: “We’ll be looking at a lot of things — we’ll also be looking at very large portions of our country, but I’ll be guided very much by Dr. [Anthony] Fauci, and by Deborah [Birx].”

Fauci, the longtime head of the National Institute of Allergy and Infectious Diseases, whose absence from recent coronavirus briefings triggered a wave of speculation in the media, said the timeline was still “flexible.”

“This a–hole and his rich friends are too stupid to get that we can only get through this together,” former Obama speechwriter Jon Favreau wrote. “Everyone is at risk from the virus. Everyone suffers when there aren’t enough hospital beds. Everyone struggles when millions are too sick to work.”

Fellow Obama communications alum Tommy Vietor, meanwhile, deleted a tweet lamenting that he was reduced to drinking red wine in the shower during the economic shutdown.