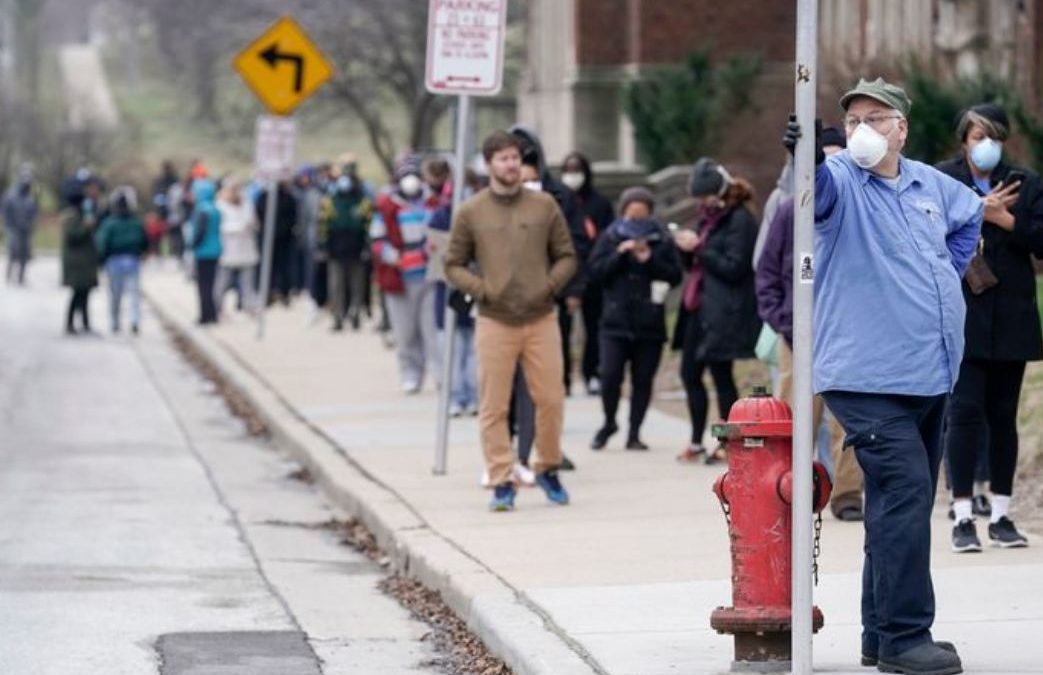 In one polling station in Madison, voters didn’t get “I voted” stickers after casting their ballots — a precaution poll workers took to minimize human contact.

Despite a statewide stay-at-home order issued by Gov. Tony Evers, a Democrat, Wisconsin held an election during the coronavirus pandemic on Tuesday. As voters lined up at the polls, the state health department reported 138 new coronavirus diagnoses and 15 deaths. This election was not a democratic exercise, as it required voters to choose between their health and their right to vote. It is a poor omen for what awaits when November comes.

Evers tried twice to postpone the election. First, he called for the Republican-controlled legislature to do so in a special session, but they gaveled out the session in a matter of seconds without taking action. Then he issued an emergency order moving the election to June, but the Republican-allied judges on the state Supreme Court overruled that. The Democratic Party also sued to expand absentee balloting, but all five Republican-appointed U.S. Supreme Court justices ruled against it.

“Good morning and welcome to the Shit Show! Today’s episode has been produced by the Supreme Court and directed by the incomparable Speaker and Senate Majority leader duo. Buckle up, this one’s sure to disappoint!” Lt. Gov. Mandela Barnes (D) tweeted Tuesday morning.

“I thought of one other better way to explain it, but calling it a shit show was the mildest way to put it,” Barnes told HuffPost in an interview. “I have told people if they have a ballot, get it in the mail … In good faith I cannot tell people to go out there and vote.”

Former vice president Joe Biden and Sen. Bernie Sanders (I-Vt.) were on the ballot for the presidential primary on Tuesday, but the most important race in the state is the state Supreme Court race pitting incumbent conservative Dan Kelly, who has been endorsed by President Donald Trump, against progressive lower court judge Jill Karofsky.

Republicans hope to keep their 5-2 majority on the court intact with a Kelly victory. That will enable them to easily rule in favor of a conservative group’s challenge to purge 240,000 voters ahead of November’s general election. (Trump won Wisconsin by fewer than 22,000 votes.) It would also all but ensure judicial approval to any similar future effort by the heavily gerrymandered Republican legislative majority if it votes to cut Evers out of the 2021 redistricting process.

“It’s not a secret: they want to protect this Supreme Court seat,” Barnes said, pointing to the 2018 lame duck legislative session when Republican lawmakers tried to keep the Supreme Court race off the presidential primary ballot, a typically higher turnout election. “This whole thing is political. This is the fallacy of nonpartisan courts. They knew exactly who to run to. They knew they could get exactly what they wanted politically through the Supreme Court here and the U.S. Supreme Court.”