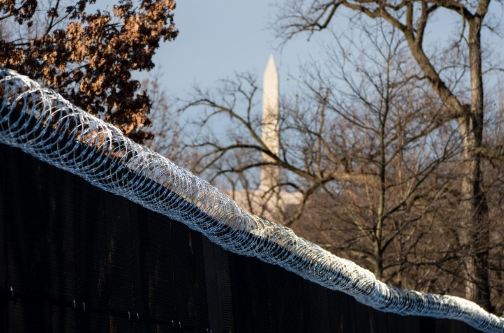 WASHINGTON — Fears of major protests by armed, far-right Trump supporters outside the Capitol and at state capitols Sunday proved unfounded, with only small groups, some carrying weapons, gathering in a handful of cities including Austin, Texas, Phoenix, Salem, Ore., and Lansing, Mich.
With large-scale contingents of local police, state troopers and National Guard troops on patrol, the extremists remained peaceful or absent from Capitol Hill and beyond as Sunday evening approached. The FBI had warned of protests Sunday, based in part on notices circulating online urging people to gather at noon, “armed at your personal discretion.”

FILE – In this Wednesday, Jan. 6, 2021 file photo supporters of President Donald Trump are confronted by U.S. Capitol Police officers outside the Senate Chamber inside the Capitol in Washington. Jacob Anthony Chansley, the Arizona man with the painted face and wearing a horned, fur hat, was taken into custody Saturday, Jan. 9, 2021 and charged with counts that include violent entry and disorderly conduct on Capitol grounds. (AP Photo/Manuel Balce Ceneta, file)
POLITICS
Alleged Capitol rioters argue Trump invited them in. They want pardons