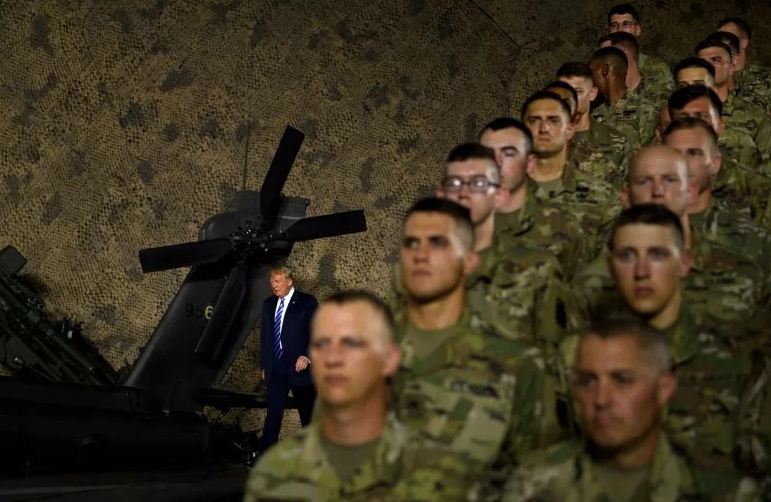 In a message to families posted on Facebook, division commander Maj. Gen. Brian Mennes said the troops were returning home “sooner than anticipated”—60 days earlier than previously planned—in response, he said, to the commander-in-chief’s desire to downsize forces in Afghanistan but also an accelerated schedule because of coronavirus. After a 14-day quarantine in what he says will be comfortable facilities on base, soldiers and families will be reunited.

The military is loath to admit that it is curtailing any war-related activities in response to the global pandemic. But according to official statistics labeled “sensitive” and not publicly released, coronavirus cases have been reported at 97 domestic military bases in 37 states, service members in uniform making up over half of the total of just over 1,000 uniformed, civilian, contractor, and family members who have tested positive. And quietly all across the armed services, moves are being made to reduce the number of troops overseas, to curtail exercises and activities, to hold up future deployments, and even to rethink some of the now two-decades-old routines of perpetual war.

Nothing big has been decided, and some military and government organizations are doubling down to bring attention to Russian and Chinese disinformation campaigns that right now seem the most effective way to wage a geopolitical fight against America. And there are troops on the ground, and some in the air, in the Middle East and Africa who are actually in the midst of fighting—against ISIS in Syria and Iraq or al Shabaab in Somalia.

But North Korea’s launch of missiles this past week and Iranian meddling in Iraq have lost some of their normal urgency. And the minds of soldiers, sailors, Marines and airmen and women are decidedly focused on home.

It is a worried force, as worried as I’ve ever seen it, and not just because coronavirus is global and knows no boundaries. But also because the future, including their future, is so uncertain.

If you’ve ever been in the military or know anyone who has, you know that so much of the attraction is certainty, a funny thing to say when people are out there actually risking their lives. But with a straightforward mission, clear chains of command and strong leadership, the willingness to risk one’s life to defeat an enemy is made easier. It’s a combination of purpose and duty. You’d be hard pressed to find another institution in America that is as gung-ho as the military. Not coincidentally, it’s also an institution that is consistently rated as the most respected in American society.

But in the past three weeks, that “fight” has expanded against an “invisible enemy.” Enemy might sound hyperbolic, and certainly some of the language and the jargon of the military is grating to the civilian ear. But against this enemy—this declared enemy—the path to victory is also uncertain. To rally the troops, and to assuage some of the anxiety of young people who make up the bulk of the armed forces, the natural inclination of military leaders is to fall back on warfare terminology in their exhortations. That’s why in more than a thousand social media pages maintained by military units and commands on Facebook, Twitter and Instagram, there is a lot of “win this fight,” “keep pounding,” and even the hashtag #Killthevirus.

“The Department of Defense is engaged in one of the great global challenges of our time,” Secretary of Defense Mark T. Esper wrote to the troops on Friday, a typical gung-ho message that has been emanating from so many commands. “While the situation continues to evolve,” Esper said, “I want to assure the force that we will take all necessary measures to protect our people and win this fight.”

“All necessary measures” is itself hyperbole. While every military base in America and around the world is alert to the threat of coronavirus in the same way that civilians are, in reality, only a tiny portion of the force is actually being utilized. Though hospital ships are now in Los Angeles and New York City, and land medical units are set up or on the move towards heavily hit places like Seattle, Houston and New Orleans, it’s important to remind ourselves that of a total of some 2.4 million men and women who wear the uniform, only about two percent are in the fight. That includes 14,670 National Guardsmen and women out of total force of 450,000; plus some 30,000 active duty forces engaged in direct off-base support, of a total of some 1.3 million. That’s not even counting the additional hundreds of thousands of civilians and contractors who also work for the military.

This is not to suggest that the military could be doing more. Part of winning is also preserving order and discipline and even its good name before throwing troops into another war. And so another message of the past week, one that is ubiquitous in every commander’s and soldier’s mouth, is that the military is not in command of this war. That theme has been pounded home over the past week: that everything the military does in the United States is in support of state governors and in response to requests levied by the National Response Coordination Center, FEMA’s clearinghouse to link state needs with military resources.

Listen to the calming words of military leaders and you’ll hear all the phrases that connote military subordination to civil control—interagency, whole of government, whole of nation. Not faced with a 9/11-like shock attack or a Hurricane Katrina-like catastrophe, the Defense Department has had a chance to think and act deliberately, to consider all of the errors and controversies stirred up in past emergencies and do better. And indeed that is the case.

Should coronavirus continue to worsen and spread, there aren’t any more hospital ships to call upon, though, and the rest of the military isn’t made up of combat hospitals or medical units that can be called out. They are limited in number. Nor is the military an endless source of engineers and logisticians. The rest of the military—the preponderance of the military overall—is nuclear forces, bombers and fighter jets, warships and ground combat units. Not only are many engaged in the other fight, but as Vice Chairman of the Joint Chiefs Gen. John Hyten said Monday, these global operations continue: “Right now we have no impact to our ability to conduct operations in the Pacific, Atlantic, & Middle East, wherever we need to go.”

Gen. Hyten makes such a statement not only because he needs to communicate with and motivate a force whose mind is elsewhere, but also to communicate to America’s adversaries that coronavirus hasn’t impaired any ability to act or respond. That also means sequestering and keeping the force healthy, not because the military is standing by to take over America but because its wartime mission might require it to rapidly mobilize.

“What we’re trying to do is we’re trying to balance protecting the force so we can protect the nation,” Army Chief of Staff Gen. James C. McConville said at the Pentagon on Friday.

At Ft. Drum in upstate New York, the Army won’t say when additional forces that it has in Afghanistan might return home, for now limiting what they say to the statement that “those soldiers deemed essential to the ongoing mission” will remain. But the planned rotation of the 2nd Brigade to Louisiana to begin training for deployment has been postponed indefinitely.

“I can’t believe that post-coronavirus we will just return to our steady state,” said a senior officer in the brigade who requested anonymity because he isn’t authorized to speak publicly about plans. Already in private conversations, he says he and his fellow soldiers are talking about how the pandemic will focus Americans even more inward. “We’re already engaged in a process of shifting from the Mideast to great-power competition against Russia and China,” he said. “I imagine this pause”—what he calls getting off the treadmill—”will be an opportunity to ask what we’re doing in the world, even to examine whether our military is structured to handle the immediate threats we face.”

When I ask him whether that isn’t some silver lining, he says he thinks it’s too early to tell. “But I can tell you right now that the families of soldiers are already asking some pretty good questions.”

Coronavirus live updates: Need to prepare for 'battle' at the apex, Cuomo says