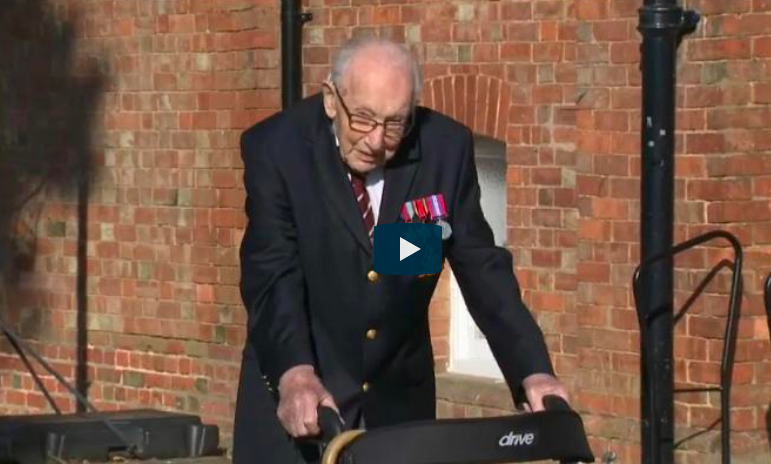 You’re never too old to take up exercise, especially when it’s for a good cause. That’s why 99-year-old British army veteran, Captain Tom Moore, made it his challenge to walk 100 laps of his 25m-long garden before he reaches his 100th birthday.

The goal was to raise £1,000 for NHS frontline workers. But to his surprise he has smashed his target and raised more than £12 million (over €14 million) gaining the support of over 500,000 people.

“When it started to take off, I think we were all amazed, I couldn’t believe (the amount of money that had been raised) and we still can’t believe (it)”, he said.

What started off as a humble gesture to raise some money to thank the healthcare staff who looked after him when he broke his hip has now gone global.

“The nation has taken it to their hearts and now this is the nation’s story, and beyond that, it’s truly gone global, Hannah Ingram-Moore, Thomas Moore’s daughter said. “We are being talked to from people around the world. I just came off the radio in America”.

The Captain’s selfless fundraiser has even earned him praise from the government.

“I want to pay a special tribute today to Captain Tom Moore, who at the age of 99, has raised over £7 million for NHS charities by completing 100 laps of his garden”, the UK’s Health Secretary, Matt Hancock said on Tuesday. “Captain Tom, you’re an inspiration to us all and we thank you.”

He has until the 30th of April to complete his walk. The only question now, is not whether he will be able to rise to the challenge, but how much more money he can make for the frontline workers.