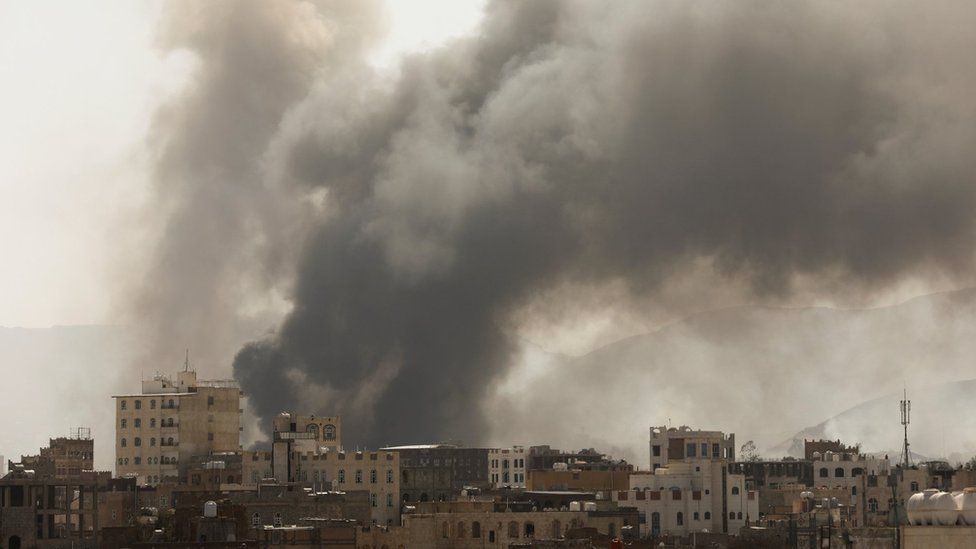 Many people are feared dead after a fire at a migrant detention centre in Yemen’s capital, Sanaa, on Sunday.

The International Organization for Migration (IOM) confirmed eight deaths, but officials at the UN agency said as many 30 might have been killed.

It is not known what caused the blaze at the facility, which was holding hundreds of mostly Ethiopian migrants.

But an air strike by a Saudi-led coalition fighting the rebel Houthi movement damaged buildings nearby.

The coalition carried out the strikes on Sanaa as the Houthis launched drones and ballistic missiles at cities and oil installations in Saudi Arabia.

Yemen has been devastated by a conflict that escalated in 2015, when the Iran-aligned Houthis seized control of large parts of the country and the Saudi-led coalition launched an operation to restore the government’s rule.

The UN says the war has caused created the world’s worst humanitarian crisis and caused an estimated 233,000 deaths, including 131,000 from indirect causes such as lack of food, health services and infrastructure.

IOM regional director Carmela Godeu said in a tweet that both migrants and guards were among those who died in Sunday’s fire.

The migration group’s staff were offering emergency care to more than 170 injured people, of whom at least 90 were in serious condition.

“The cause of the fire incident in the holding facility remains unclear,” Ms Godeu added. “But this is just one of the many dangers that migrants have faced during the past six years of the crisis in Yemen.”

In a statement, the Houthi authorities said they held the IOM and the UN fully responsible for the fire, accusing them of failing to house migrants and not helping to deport them. Neither function is part of the IOM’s mandate.

Despite Yemen’s war, tens of thousands of migrants – mostly from the Horn of Africa – try to pass through the country every year, hoping to find work in Saudi Arabia. But the borders are closed and the migrants are stuck there.

Last week, the IOM said at least 20 people had drowned after smugglers threw 80 migrants overboard during a crossing between Djibouti and Yemen.

Another 41 coronavirus cases identified in Japan