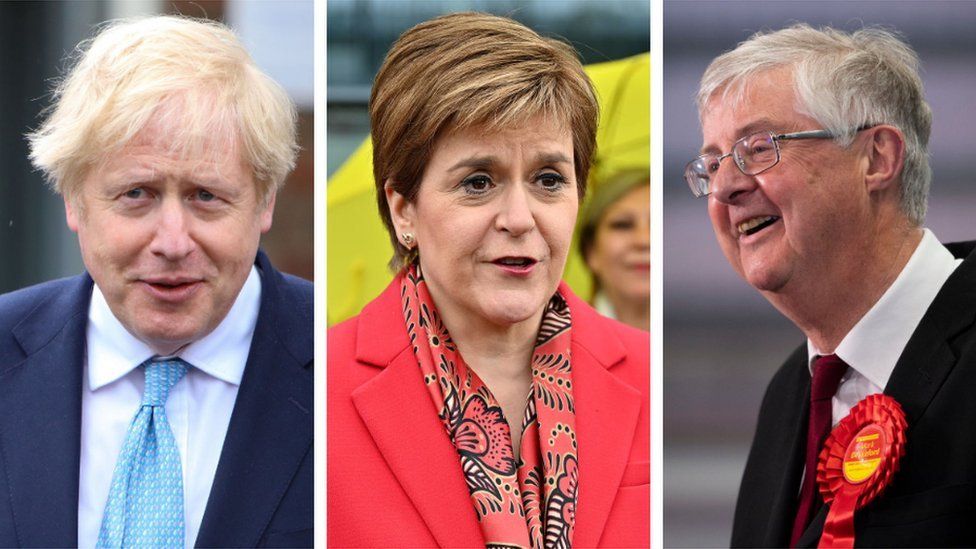 Prime Minister Boris Johnson has invited the leaders of the devolved nations to a summit on how “Team UK” can recover from the pandemic.
It follows the SNP’s fourth Scottish Parliament election win in a row and Labour’s win in the Welsh Parliament.
The SNP’s Nicola Sturgeon said there could be “no democratic justification” for blocking an independence vote.
But Mr Johnson said talk of “ripping our country apart” would be “irresponsible and reckless”.
The prime minister congratulated Ms Sturgeon and Welsh First Minister Mark Drakeford on their re-elections and invited them to a meeting “to discuss our shared challenges and how we can work together in the coming months and years to overcome them”.
The PM rang Mr Drakeford on Saturday and plans to speak to Ms Sturgeon on Sunday.

In letters sent to the leaders and shared by No 10, Mr Johnson highlighted the Covid vaccine rollout as an example of “Team UK in action”, with the UK procuring doses at scale, and he urged them to continue the “cooperative spirit”.
He said the recovery would be “a difficult journey” but that “the broad shoulders of the UK” had already supported jobs and businesses throughout the crisis.
In tackling challenges such as lost learning in schools, NHS waiting lists and court backlogs, Mr Johnson said: “We need to show the same spirit of unity and cooperation that marked our fight against the pandemic.”
“We will all have our own perspectives and ideas – and we will not always agree – but I am confident that by learning from each other we will be able to build back better, in the interests of the people we serve,” he said.

The SNP fell one seat short of an overall majority in the Scottish parliament elections, securing 64 seats, but with eight Scottish Greens the final result still leaves Holyrood with a pro-independence majority.
In her victory speech, Ms Sturgeon claimed there was a clear mandate for holding a referendum once the danger of the coronavirus pandemic had passed.
Hailing her party’s “historic and extraordinary” fourth election win, she said voters in Scotland had backed a “progressive, inclusive, outward-looking vision” but faced “many more years of right-wing Brexit-obsessed Tory governments that we don’t vote for”.
She said an independence referendum was “the will of the country”.
“Given the outcome of this election, there is simply no democratic justification whatsoever for Boris Johnson or anyone else seeking to block the right of the people of Scotland to choose our future,” she said.
Ms Sturgeon said any attempt to prevent it would “demonstrate conclusively that the UK is not a partnership of equals and that – astonishingly – Westminster no longer sees the UK as a voluntary union of nations”.

Combinations of drugs may be needed to fight coronavirus, FDA scientists say