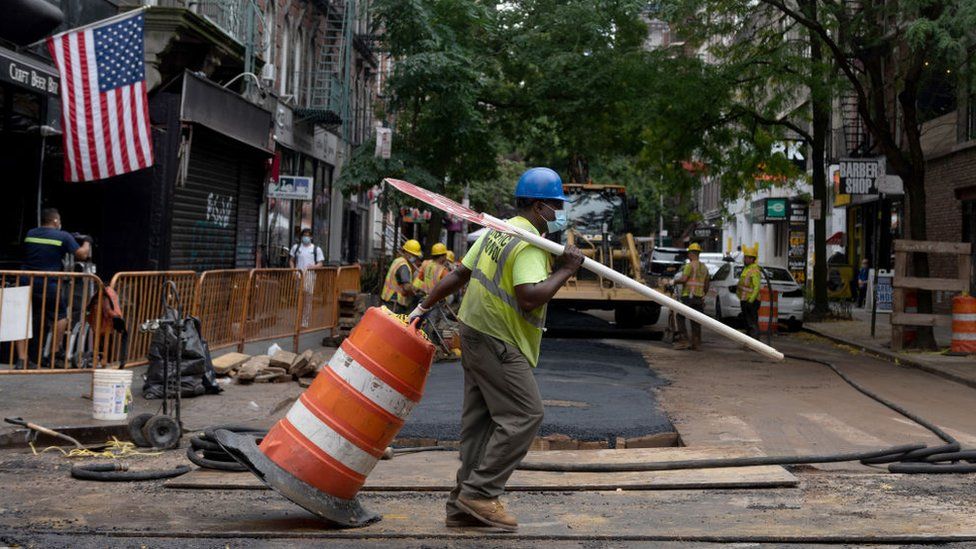 US employers hired fewer workers than expected last month despite a huge stimulus package that saw the government send $1,400 (£1,000) cheques to most Americans.
Just 266,000 jobs were added in April and the unemployment rate edged up to 6.1%, according to the Bureau of Labor Statistics.
It said a hiring spree among leisure and hospitality businesses was offset by declining courier numbers.
In all, 9.8 million remain unemployed.
In February 2020, before lockdowns forced millions into unemployment, 5.7 million people were out of work.
In March, the Biden administration pushed through the $1.9tn stimulus package.
The latest jobs figures were well below the expectations of economists, who had predicted that the gain would be anywhere from 900,000 to 2 million jobs.
That would have been well ahead of the 770,000 jobs that were added in March, which was considered a sign that America’s economic recovery was gaining pace.
In a speech on Friday to “put today’s jobs report in perspective,” President Joe Biden said the new job numbers “show we’re on the right track”.
He defended his bailout as a “year-long effort to rescue our country” and dismissed suggestions “we should be disappointed”.
His speech came after his Democratic party ally, Speaker of the House Nancy Pelosi, issued a statement calling the April report “disappointing” and for Congress to approve more funds for infrastructure spending.

The slowdown in hiring was “very probably” not a result of weaker demand for workers, said Ian Shepherdson, chief economist at Pantheon Macroeconomics.
“We know from endless surveys that labour demand is very strong, but we also know from both surveys and media-reported anecdotes that firms are finding it hard to recruit people,” he said.
He said that the data “made it much easier” to argue that putting up unemployment benefits by $300 a week in the March relief bill had “crimped labour supply”.
Some states agree with that argument. Both South Carolina and Montana have said they will stop unemployment benefits offered by the federal government from being paid to their citizens.
They are worried that the extra money is more likely to persuade people to stay at home, keeping them out of the workforce. Instead, Montana is offering $1,200 to those who return to work.