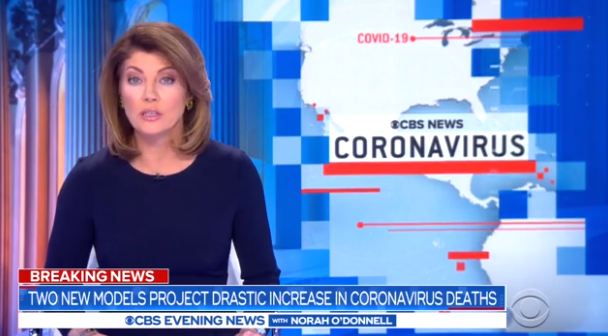 A research model often cited by the White House is now projecting that COVID-19 will kill nearly 135,000 in the U.S. by August, nearly double the worst-case scenario predicted last week. The reason? More people going outside.

But there’s dramatic evidence of rising tension after weeks of restrictions to halt the virus’ spread — including a Colorado man planning to attend a protest of “stay at home” orders who was arrested after police found pipe bombs at his home.

Authorities said the pipe bombs were found inside the home of 53-year-old Bradley Bunn, who was arrested by the FBI on Friday. Sources told CBS News that Bunn encouraged demonstrators to bring firearms to a May Day protest.

It’s not just Colorado. In Flint, Michigan, three people were charged for murder in the shooting death of a security guard, 43-year-old Calvin Munerlyn, who police say had insisted one of them wear a mask. And in Boston, hundreds came out to protest Massachuetts’ stay-at-home order.

In New York, a police officer was put on modified duty after a violent takedown of a man during a crack-down on social distancing. In Austin, Texas, a man was arrested for pushing a park ranger into water after the ranger asked people to distance themselves. And in Chicago, two large parties were shut down, including one in which hundreds of people were dancing in the street.

Eight states, including Texas, have seen 1,000 or more new case spikes over the previous week. Only five states have seen a 1,000 case drop during the same period.