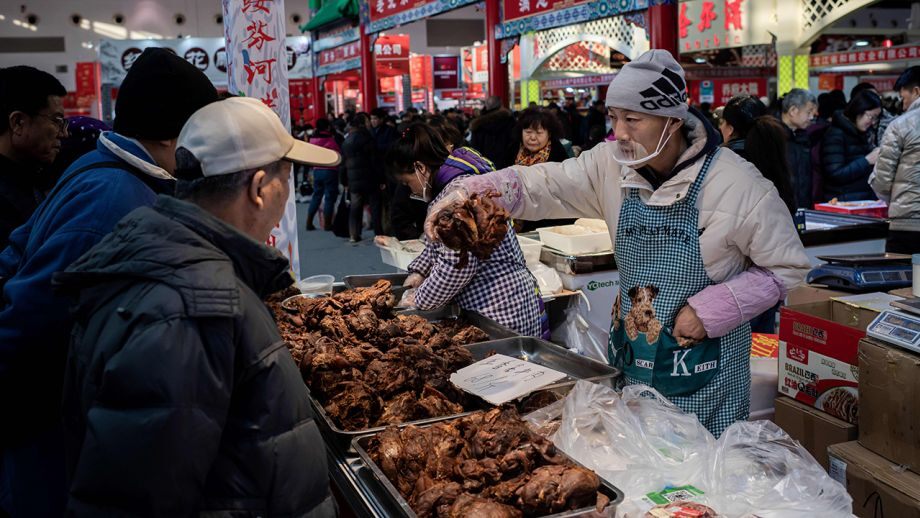 In another effort to skirt blame for the global coronavirus pandemic, the Chinese government has now pointed the finger at Italy as part of its ongoing propaganda campaign meant to sow disinformation about the outbreak.

A widely promoted story in China’s Weibo social media platform claims that the virus could have started in Italy, not China, in as early as October.

The latest efforts come after several Chinese diplomats accused the U.S. Army, as well as the Centers for Disease Control and Prevention, last week of bringing the virus to China.

The coronavirus, which develops into the novel respiratory illness known as COVID-19, originated in the Chinese city of Wuhan, the capital of Hubei province, in November, the World Health Organization reported in February.

But according to a report published Monday by Quartz, a New York City-based business news site owned by Japanese media company Uzabase, Chinese state-run media outlets have translated and republished several interviews with Italian doctor Giuseppe Remuzzi in which he speaks of early cases in Lombardy.

In one of them, a story published by NPR last Thursday, Remuzzi said he spoke with practitioners in northern Italy who “remember having seen very strange pneumonia, very severe, particularly in old people in December and even November.”

“This means that the virus was circulating, at least in Lombardy and before we were aware of this outbreak occurring in China,” he said. 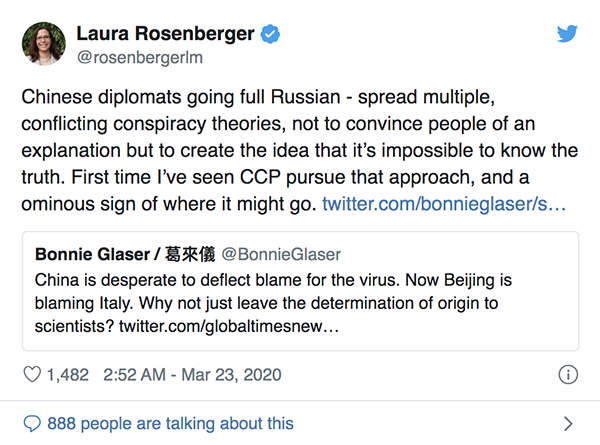 The article was translated from English to Chinese by Chinese state media CCTV and posted on Weibo, a Chinese microblogging site, with the hashtag #expert says the coronavirus might have started circulating in Italy last November#

The translated story is trending and has been viewed more than 490 million times on Weibo, according to the report by Quartz, with many users commenting that Remuzzi’s interview proves that the virus could not have originated in China.

“Chinese diplomats going full Russian — spread multiple, conflicting conspiracy theories, not to convince people of an explanation but to create the idea that it’s impossible to know the truth,” Laura Rosenberger, the director of Washington-based Alliance for Securing Democracy, said on Twitter on Sunday.

“First time I’ve seen CCP pursue that approach, and an ominous sign of where it might go,” she added, referring to the Chinese Communist Party.

Remuzzi is the director of the Mario Negri Institute for Pharmacological Research and was born in Bergamo, a city in the northern Lombardy region, which is the epicenter of the outbreak in Italy. He published a paper on March 13 in the medical journal The Lancet about the Italian government’s response to the pandemic and was later interviewed by NPR as an expert to speak to how Italy was seemingly blindsided when the virus was first reported there on February 27.

In a separate interview with Italian broadcaster La7 Attualità, Remuzzi said some practitioners in northern Italy reported seeing strange pneumonia cases in as early as October. That interview was translated from Italian to Chinese by Chinese state-owned TV station CGTN and posted on Weibo. The video was viewed more than 7 million times on the platform, Quartz reported. 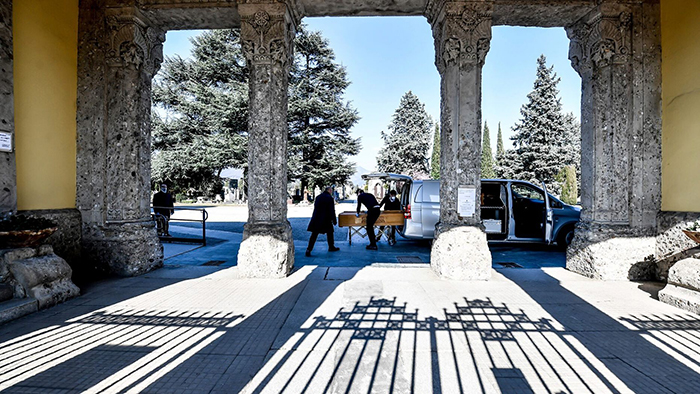 Former House Speaker Newt Gingrich, who is currently in Italy with his wife, told the “Fox News Rundown” podcast Tuesday that flight connections between Wuhan and Milan may be the source of the early coronavirus outbreak in the European country, which currently has the highest death rate of any nation affected by the pandemic.

“None of us, at least I didn’t know that there were 100,000 Chinese [people] living in northern Italy and that many of them come from Wuhan and that there was a flight between Milan and Wuhan,” Gingrich explained.

“We think that’s how the virus got Italy early. Initially, the government didn’t realize how dangerous it was going to be,” he continued. “It dealt with it initially as sort of a small town, local regional problem, and then boom, it exploded.”

Europe is now deemed the epicenter of the global pandemic and the virus has killed more than 6,000 people in Italy alone.

Last week, President Trump received pushback for repeatedly saying at press conferences that it was a “Chinese virus” that caused the pandemic. Several Chinese diplomats tweeted messages accusing the U.S. Army of bringing the virus to China. Some tweets also accused the Centers of Disease Control and Prevention from keeping the virus a secret in the U.S. until its widespread outbreak in China.

The State Department strongly rebuked those claims, with Secretary Mike Pompeo summoning the Office of Foreign Affairs of the Chinese Communist Party, Yang Jiechi, for a conference call about the allegations last week.

“As a global crisis, COVID-19 should be an area of cooperation between nations,” Pentagon press secretary Alyssa Farah also wrote last week, responding to Zhao’s tweet. “Instead, the Communist Party of China has chosen to promulgate false & absurd conspiracy theories about the origin of COVID-19 blaming U.S. service members. #ChinaPropaganda”

Coronavirus sends India into lockdown as trains halted, Modi says 'please save yourself'