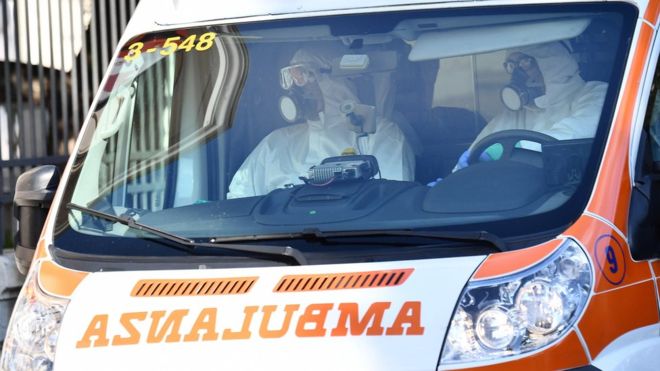 The Italian region worst hit by coronavirus has seen a steep decline in the number of deaths and infections but fears are growing that the country’s south could become the next hotspot.

Recent numbers from the northern region of Lombardy suggested the epidemic might be slowing at its epicentre.

But poorer southern parts are seeing a sharp rise in deaths, raising fears the health service could be overwhelmed.

Italy has reported 7,503 deaths from coronavirus and 74,386 confirmed cases.

The rise of 7.5% in new infections on Wednesday was the lowest since the start of the outbreak in the country, the worst-affected in Europe and where almost everything has been closed for over two weeks and people told to stay at home.

Hans Kluge, Europe’s regional director at the World Health Organization, said the numbers were “encouraging signs” but cautioned that it was too early to say whether the worst had passed.

What is happening in Italy’s south?
Contagion and deaths are far less widespread there, but worrying signs are coming from regions such as Campania around Naples and Rome’s Lazio where the health system is considered much less equipped than in the rich north.

So far there have been 74 deaths in Campania and 95 in Lazio.

In an open letter to Prime Minister Giuseppe Conte, Vincenzo De Luca, president of the Campania region, complained that the central government had not provided promised ventilators and other life-saving equipment.

“At this point there is the real prospect that Lombardy’s tragedy is about to become the south’s tragedy,” he said. “We are on the eve of a major expansion of infections which may not be sustainable.” 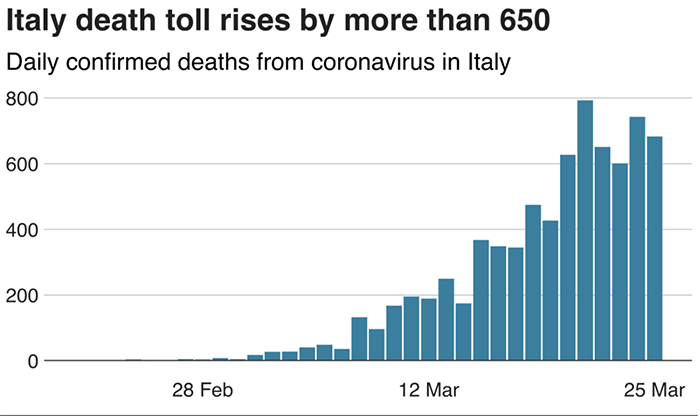 On Thursday, Mr Conte told the Italian Senate that all of Europe would be hit by a “hard, severe” recession following the coronavirus emergency, and that “extraordinary and exceptional measures” were needed to face the shock.

With analysts predicting that the strict measures will result in Italy sliding into its deepest recession in a generation, Mr Conte promised a second stimulus package worth at least €25bn (£23bn; $27bn).

What else is happening in Europe?
In Spain, the second-worst hit European country, the daily death toll fell for the first time in a week, according to the health ministry. There were 655 new deaths in the past 24 hours, bringing the country’s total to 4,089.

On Wednesday, the country’s death toll surpassed that of China, where the outbreak began. Meanwhile, the overall number of coronavirus cases in Spain soared to 56,188 from 47,610, a new daily high.

Nursing homes, whose elderly residents are highly vulnerable to the disease, have been particularly hard hit by Covid-19, the disease caused by the virus. A report by Cadena Ser radio network suggested at least 397 deaths had occurred in such places.

Earlier on Thursday, the Spanish parliament extended the restrictions on people’s movements until at least 12 April, with Prime Minister Pedro Sánchez saying: “I’m convinced that the only efficient option to counter the virus is social isolation.”

Russia said it would suspend international flights from Friday, and Moscow would close all shops except for pharmacies and grocery stores from Saturday
Germany’s relatively low death rate was largely due to the high number of tests being carried out, said Christian Drosten, head of the Charite University Hospital’s Institute of Virology in Berlin
In France, where 1,331 deaths have been reported, President Emmanuel Macron said he would call on the army to help the country while a government spokeswoman said the 15-day lockdown measures could be extended, with a final decision expected “in the coming days”