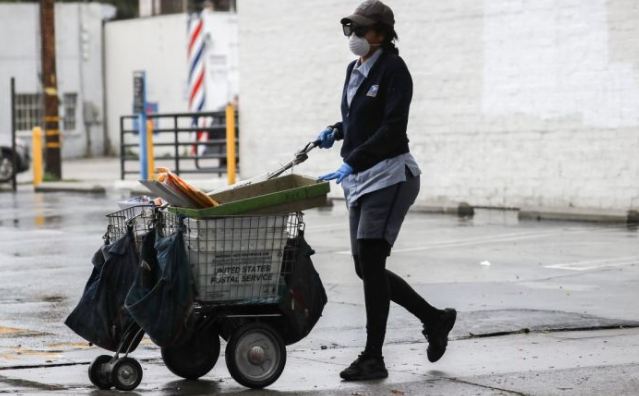 WASHINGTON — Amid a cash crunch threatening to put the U.S. Postal Service out of business, the Trump administration is being accused of blocking bipartisan efforts to provide money to the agency as part of a long-sought conservative effort to privatize mail delivery.

The coronavirus pandemic has led to a precipitous drop in mail deliveries, worsening a crisis for an already financially troubled service. Last week, Postmaster General Megan Brennan said financial woes exacerbated by the pandemic could cause the agency to run out of money by October.

The $2 trillion coronavirus stimulus package passed on March 25 did not provide assistance for the Postal Service, despite bipartisan support for the funding, according to an aide to the Senate Homeland Security and Governmental Affairs Committee, which has jurisdiction over the Postal Service.

Instead, the legislation only allowed the Postal Service to borrow $10 billion from the Treasury Department.

“There was bipartisan support for direct appropriations to go to the Postal Service,” said a committee aide, who requested anonymity to discuss ongoing negotiations. Treasury Secretary Steve Mnuchin “said you can have the loan or you can have nothing.”

Yet in the weeks since the stimulus passed, the Treasury Department has not approved the loan.

A spokesperson for Senate Homeland Security and Governmental Affairs Committee Chairman Ron Johnson, a Wisconsin Republican, did not respond to a request for comment.

While the White House will not comment on the reason for the delay, American Postal Workers Union President Mark Dimondstein said the administration is using the loan to try to push privatization. He blames administration “idealogues,” including Mnuchin, for using the crisis “to push their privatization agenda.”

A spokesperson for the Treasury Department said Mnuchin and the White House are “supportive” of the loan.

“Treasury, including Secretary Mnuchin, has been in direct contact with the USPS multiple times this week, and we are working closely with the USPS to put the new $10 billion line of credit with the USPS into effect,” the Treasury spokesperson said in an email.