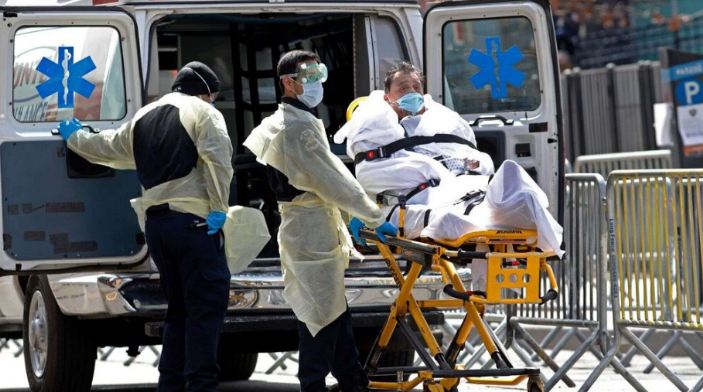 COVID-19, the disease caused by the novel coronavirus, is now the No. 1 cause of death in the U.S. — killing more people on average per day than cancer or heart disease.

The virus is the cause of 1,970 deaths in the U.S. per day, according to a graph published Tuesday by Dr. Maria Danilychev, based in San Diego, Calif. In comparison, the graph shows 1,774 deaths per day are attributed to heart disease and 1,641 to cancer, according to Newsweek.

The visualization comes as the death toll in the U.S has continued to dramatically rise in recent weeks. Fatalities surpassed 16,600 by the end of Thursday, an increase of more than 12,000 deaths from data posted by Johns Hopkins University just eight days earlier.

Deaths related to the coronavirus across the U.S. hit 1,939 on Tuesday, which was also the highest single-day total for any country since the virus was first detected in China late last year.

Just a week ago, the graph, which cites the Centers for Disease Control and Prevention (CDC) and Worldmeters.info as sources — showed COVID-19 as the third leading cause of death, averaging roughly 975 fatalities per day.

On March 22, it showed COVID-19’s daily death rate starting to surge, passing flu and pneumonia and suicide, as well as liver and kidney disease.

The graph features a time-lapse to show how daily deaths have increased since March 15.

Dr. James Lawler, a public health researcher at the University of Nebraska, estimated in mid-March that 480,000 deaths were a possibility if the infection and death rates stayed consistent at 30 and 0.5 percent, according to The New York Times.

That estimate would trail only behind cancer, which kills just under 600,000 Americans per year, and heart disease, which kills around 650,000, according to the Times.

New York has seen more than 161,000 coronavirus cases, with deaths in the state surpassing 7,000 on Thursday.

New York City, the epicenter for the outbreak in the U.S., saw its death toll rise past 5,000 on Thursday. The virus has now killed more than 2,000 more people than the number who died on 9/11.

While the death rate has increased, reports have shown hospitalizations have decreased in some areas of the U.S. Cuomo added that hospitalization rates in New York have slowed due to social distancing measures.

“Our efforts are working,” he said according to NPR. “They’re working better than anyone projected they would work. That’s because people are complying with them.”

Meanwhile, Dr. Anthony Fauci said Wednesday that based on newer data, U.S. deaths will be lower than the original projection of 100,000 to 240,000 total deaths. A decrease in daily death rates usually lags behind hospitalization rates.