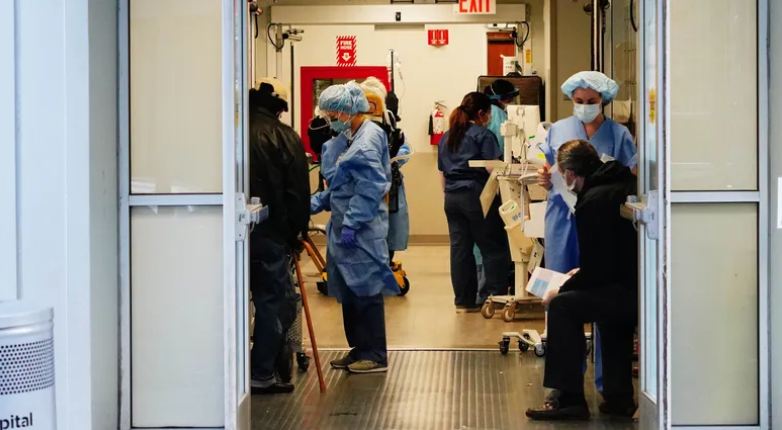 COVID-19, the disease caused by the coronavirus, was officially declared a pandemic by the World Health Organization on March 11.

There are more than 1.6 million confirmed cases of the virus worldwide, and more than 95,000 people have died from it, according to data compiled by Johns Hopkins University. Efforts to curb the outbreak have led to the global disruption of daily life and the economy, as schools and workplaces shutter in hopes of slowing transmission.

HuffPost reporters around the world are tracking the pandemic and the measures being taken to flatten the curve of transmission.

Boris Johnson’s father says the prime minister will need a period of rest after being moved from the intensive care unit at St Thomas’ Hospital in London.

Stanley Johnson said the whole family was “amazingly grateful” for the efforts of the National Health Service and for the huge outpouring of support. However, he played down suggestions that his son would quickly return to work at Downing Street.

“This is pretty straightforward now. He must rest up. As I understand it, he has moved from the ICU into a recovery unit but I don’t think you can say this is out of the wood now,” Stanley Johnson told the BBC. “He has to take time. I cannot believe you can walk away from this and get straight back to Downing Street and pick up the reins without a period of readjustment.”

He also said his son’s illness had underlined just how serious the coronavirus outbreak was.

Australia will deploy helicopters, set up police checkpoints and hand out hefty fines to deter people from breaking an Easter travel ban, officials warned on Friday, in their toughest crackdown against the novel coronavirus.

With places of worship closed, bans on public gatherings larger than two and non-essential travel limited to combat the spread of the virus, Australians were told to stay home this year or face dire consequences.

Australia had 6,152 coronavirus infections by Friday, up 100 from the previous day, with 53 virus-related deaths.

Even before the announcement, the U.N. had described Yemen as the world’s worst humanitarian disaster. Since war erupted there in 2014, over 100,000 people have been killed. Many of the country’s citizenry are on the brink of starvation and more than half of Yemen’s health facilities have been destroyed or closed. According to The Associated Press, a COVID-19 outbreak there could be devastating.

The state of New York now has more confirmed cases of coronavirus than any country.

New York had 161,799 confirmed cases as of Thursday evening, according to the Johns Hopkins University Coronavirus Resource Center. After the United States, the country with the highest number of confirmed cases is Spain with 153,222 cases.

The increase in the number of virus patients hospitalized in New York has grown at a slower rate over the past two weeks, from over 20% a day at one point to just a 1% increase from Wednesday to Thursday.

But the number of New Yorkers dying of COVID-19 keeps growing, with the state recording another one-day high from Wednesday to Thursday with 799 deaths.

New York Gov. Andrew Cuomo stressed that social distancing and other guidelines must continue to be enforced so that the state can maintain its progress.

British Prime Minister Boris Johnson has been released from intensive care into a hospital ward.

A spokesman for Johnson said: “The prime minister has been moved this evening from intensive care back to the ward, where he will receive close monitoring during the early phase of his recovery. … He is in extremely good spirits.”

Johnson has spent three nights in intensive care at London’s St. Thomas’ Hospital after he was admitted on Sunday night with persistent symptoms of coronavirus.

More than 60 members of Congress wrote a letter Thursday to Senate leader Mitch McConnell (R) and House Speaker Nancy Pelosi (D) asking to include in the next coronavirus relief bill “recurring direct cash assistance to all,” particularly for low-income workers and families.

The last $2 trillion relief bill “provided a multi-year bail out for large companies, but it provided most American families with only a few months’ worth of assistance, at best,” the lawmakers — including Sen. Kamala Harris (D-Calif.) and “Squad” members Reps. Rashida Tlaib (D-Mich.), Alexandria Ocasio-Cortez (D-N.Y.), Ayanna Pressley (D-Mass.) and Ilhan Omar (D-Minn.) — wrote of the stimulus checks included in the bill.

“Without ongoing and robust direct payments lasting at least the duration of this crisis, we will fail to address the pain our communities are experiencing from this crisis,” the legislators wrote, noting that 4 in 10 adults in the U.S. say they would not be able to afford an unexpected $400 expense. “Now is not a time for timid solutions. In the face of an unprecedented moment in economic history and public health, we need to offer bigger, bolder and far more aggressive policies.”

A record 16.6 million Americans filed for unemployment in the last three weeks as businesses have shuttered nationwide. And as many Americans await their stimulus paychecks, millions of undocumented workers on the front lines of the pandemic won’t be getting a dime.

San Francisco Mayor London Breed and District Attorney Chesa Boudin announced that the city will be making 20 apartments available for domestic violence survivors to stay in for up to 90 days at no cost.

Domestic violence reports have increased worldwide as millions of people are forced to stay home to help prevent the spread of coronavirus, leaving victims in increased proximity to abusers.

In the week after the San Francisco Bay Area issued its shelter-in-place order, the DA’s office saw a 60% increase in clients who were referred to victim services compared to the same week last year.

Domestic violence shelters in San Fransisco are still open, as they are considered essential, and the city is searching for additional temporary housing. Experts recommend that victims still go to shelters, even with social isolation guidelines, as these will have protocols in place to ensure health and safety.

CNN said it has tried over the last seven days to book experts from the White House’s coronavirus task force, including Drs. Anthony Fauci and Deborah Birx, but the requests have been denied.

“When you guys cover the briefings with the health officials, then you can expect them back on your air,” a Pence spokesperson told CNN.

CNN said it often only broadcasts the question and answer portion of the White House’s coronavirus briefings, which sometimes include the health care officials. Some journalists have urged networks to stop broadcasting the briefings live, warning that the misinformation frequently peddled by Trump could be harmful to Americans navigating the pandemic.

While expressing “cautious optimism” that the spread of COVID-19 in the U.S. may be reaching a turning point, Dr. Anthony Fauci again advised Americans not to expect a quick return to anything approaching “normal.” The nation’s top infectious disease expert urged people to continue social distancing and other mitigation efforts “in order to keep those numbers down, and hopefully even get them lower.”

“When you say ‘get back to normal,’ it’s not going to be a light switch that you turn on and off,” he said on “CBS This Morning.”

Fauci, head of the National Institute on Allergy and Infectious Diseases, said it’s too early to even begin thinking about what life after the pandemic may look like. Even when the risk subsides, the process of how people return to work and school, as well as resume public gatherings, will likely be different across various states and cities depending on the virus’s spread, he said.