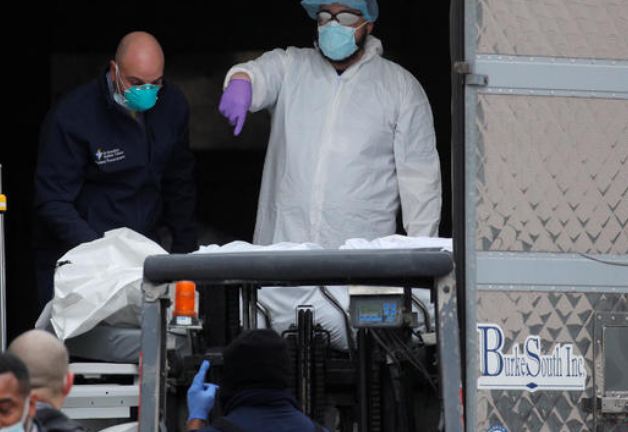 Americans have seen their country hurtle into a war-like response that few could have envisioned: Hospital tents in Central Park and Navy hospital ships docked in New York and Los Angeles.

New York Governor Andrew Cuomo said there have been 1,550 deaths in his state, the U.S. epicenter of the virus outbreak with more than 75,000 confirmed COVID-19 cases. He said the virus is more powerful and more dangerous than we expected.

“We’re still going up the mountain,” he said. “The main battle is on the top of the mountain.”

First-hand accounts from health workers on the front lines
Dire times for restaurant owners and employees
Rural-state governors tell Trump they need supplies
Detailed information from the CDC on coronavirus treatment and prevention.

“I just found out that I am positive for coronavirus. I have been exposed to people in recent days who have subsequently tested positive and I had fever, chills and shortness of breath. I just hope I didn’t give it to the kids and Cristina. That would make me feel worse than this illness!” he wrote on Twitter, referring to his wife, Cristina Greeven Cuomo.

Chris Cuomo said he is quarantined in his basement. “I will do my shows from here. We will all beat this by being smart and tough and united!”

Governor Andrew Cuomo said at a Tuesday press conference his brother is “going to be fine.” “He is young, in good shape, strong – not as strong as he thinks, but he will be fine,” the governor said.

He also said, “There’s a lesson in this.”

According to Andrew Cuomo, his elderly mother, Matilda Cuomo, was at his brother’s house two weeks ago. “I said ‘that is a mistake,'” the governor said, adding that the incident is when he came up with the idea for “Matilda’s Law,” part of his executive order to help protect seniors, immune-compromised people and those with underlying illness.

“Love is sometimes … needs to be a little smarter than just reactive,” Cuomo said.

He urged people to remember who is vulnerable and protect them.

Coronavirus live updates: Need to prepare for 'battle' at the apex, Cuomo says