Home > News > World > Coronavirus: US overtakes China with most cases 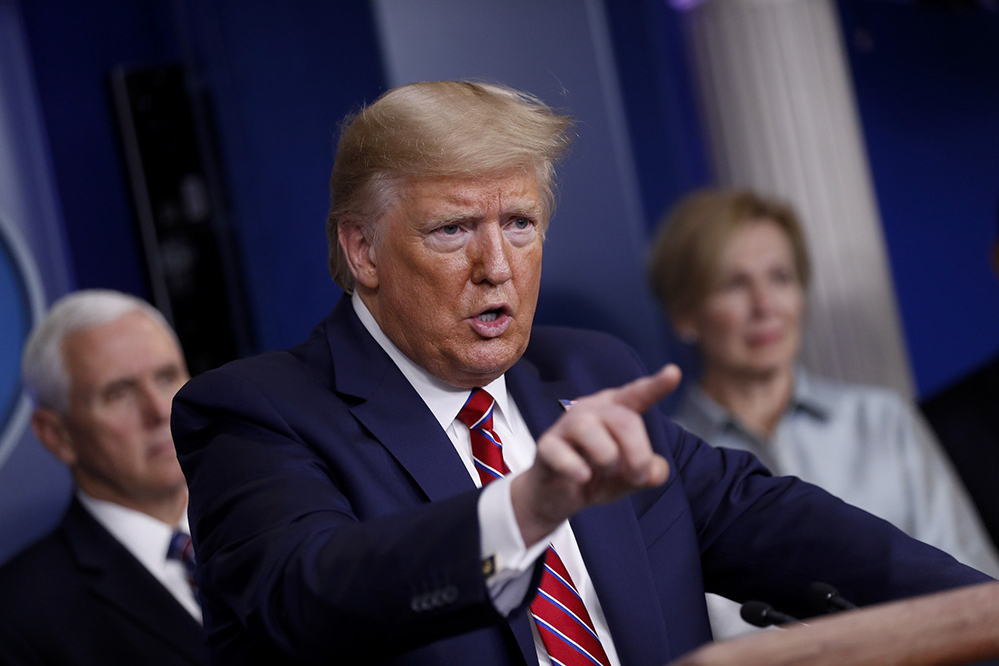 The US now has more confirmed cases of coronavirus than any other country, with more than 85,500 positive tests.

According to the latest figures collated by Johns Hopkins University, the US has overtaken China (81,782 cases) and Italy (80,589).

The grim milestone came as President Donald Trump predicted the nation would get back to work “pretty quickly”.

How did the White House react?
Asked about the latest figures at a White House briefing on Thursday afternoon, President Trump said it was “a tribute to the amount of testing that we’re doing”.

Vice-President Mike Pence said coronavirus tests were now available in all 50 states and more than 552,000 tests had been conducted nationwide.

Mr Trump also cast doubt on the figures coming out of Beijing, telling reporters: “You don’t know what the numbers are in China.”

But later, he tweeted that he had had a “very good conversation” with China’s President Xi Jinping.

“China has been through much & has developed a strong understanding of the Virus. We are working closely together. Much respect!” President Trump said.

Does the president still hope to ease restrictions?
Mr Trump has set a much-criticised goal of Easter Sunday, 12 April, for reopening the country. That plan seemed to gather impetus on Thursday as it emerged an unprecedented 3.3 million Americans have been laid off because of the virus.

At Thursday’s briefing, he said: “They [the American people] have to go back to work, our country has to go back, our country is based on that and I think it’s going to happen pretty quickly.

He added: “A lot of people misinterpret when I say go back – they’re going to be practising as much as you can social distancing, and washing your hands and not shaking hands and all of the things we talked about.”

He promised more details next week.

What could he be planning?
In a letter to state governors on Thursday, Mr Trump said his team plans to release federal social distancing guidelines that may advise some regions to loosen restrictions.

Mr Trump wrote of a “long battle ahead” and said “robust” testing protocols might allow some counties to lift their safeguards against the coronavirus.

He said the “new guidelines” would create low, medium and high risk zones that would allow the government to advise on “maintaining, increasing, or relaxing social distancing and other mitigation measures they have put in place”.

On Thursday night, Mr Trump phoned in to Fox News host Sean Hannity’s programme and said he believed Iowa, Idaho, Nebraska and parts of Texas could reopen earlier than other states.

The plan emerged as new research on Thursday estimated Covid-19-related deaths in the US could top 80,000 over the coming four months – even if people observe strict social distancing.

As many as 2,300 patients could be dying every day by April, according to the study from the Institute for Health Metrics and Evaluation at the University of Washington’s School of Medicine.

Governor Andrew Cuomo of New York, the current coronavirus epicentre in the US, said statewide quarantine orders may not have been the best approach to coronavirus.

“Young people then quarantined with older people was probably not the best public health strategy,” he told a news conference, “because the younger people could have been exposing the older people to an infection.”

Mr Cuomo said a better way forward might be a “get-back-to-work strategy” in tandem with a public health strategy.

Public health experts on the White House task force have demurred when asked about reopening the country by Easter, suggesting the timeline should be “very flexible”. 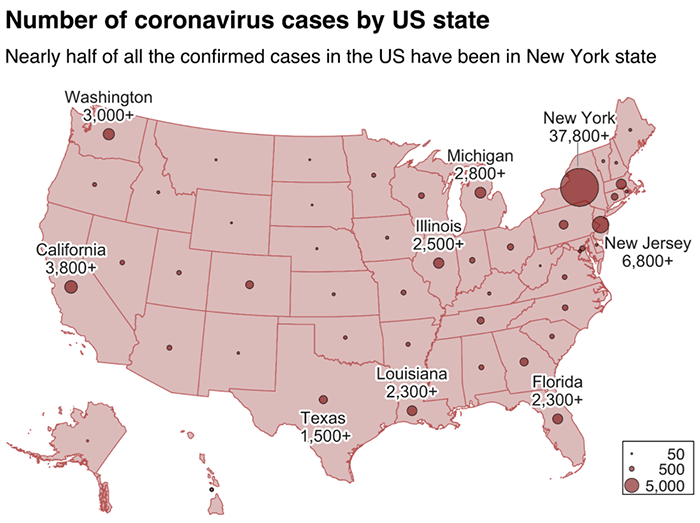 Can the president order everyone back to work?
No. On 16 March, he set a 15-day period to slow down the spread of Covid-19 by urging all Americans to drastically scale back their public interactions.

But those guidelines were voluntary and did not amount to a national order.

The US Constitution makes clear states have the power for maintaining public order and safety, which scholars say means it is the responsibility of governors to decide when virus-related restrictions get lifted.

Currently 21 US states have told residents to stay in their homes or ordered the closure of non-essential businesses in order to contain the pandemic. 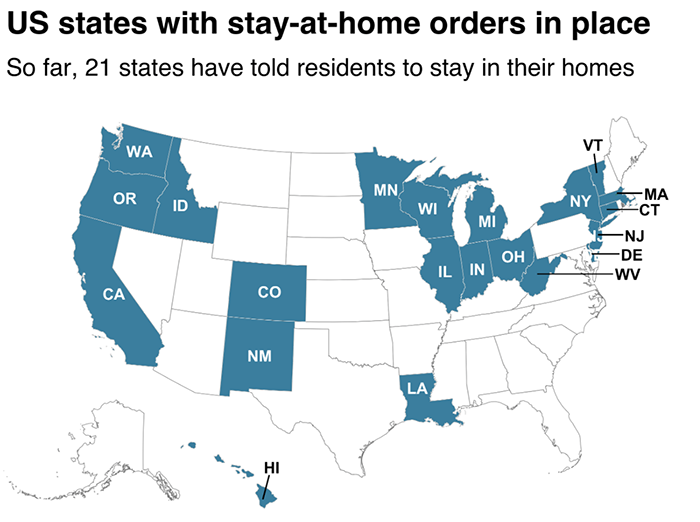 What’s happening elsewhere in the US?
There were growing fears that Louisiana could become the country’s next hotspot, with the governor warning that the state’s biggest city, New Orleans, could be out of ventilators by 2 April and potentially out of beds by 7 April.

“It’s not conjecture, it’s not some flimsy theory,” John Bel Edwards told a news conference. “This is what is going to happen.”

In New York City, more than 6,400 emergency medical calls were placed over 24 hours on Tuesday, surpassing the total from the 9/11 attacks
Mark Blum, an actor who starred in Desperately Seeking Susan and Crocodile Dundee, has died aged 69 with coronavirus, says the Screen Actors Guild
Canada slammed a US proposal to deploy troops on their joint border to help fight the virus – the deputy prime minister said it would be “damaging to our relationship”
A supermarket in Pennsylvania said it had to destroy more than $35,000 worth of food after a woman intentionally coughed all over it in a coronavirus prank
According to the San Francisco Chronicle, coyotes are roaming the empty streets of the California city, after residents withdrew indoors to limit the virus’ spread 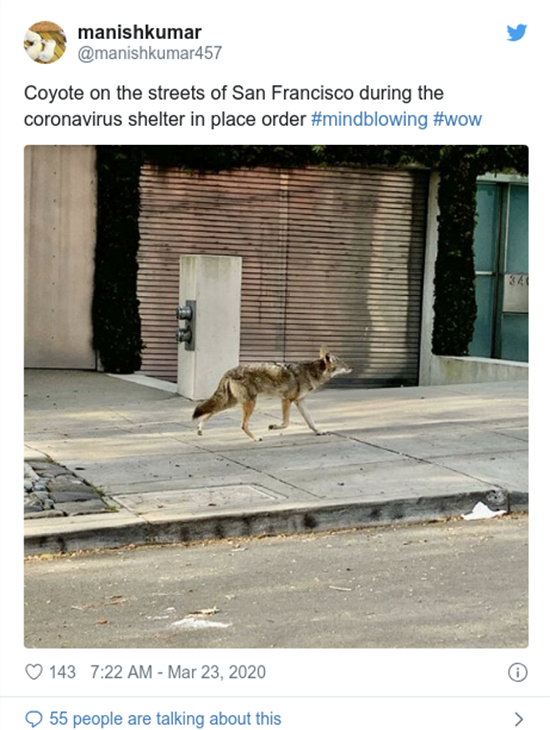 Coronavirus restrictions: When does it end and could there be a second wave?

White House may scale back coronavirus task force meetings soon, only met once this weekend

Japan to extend its state of emergency until May 31