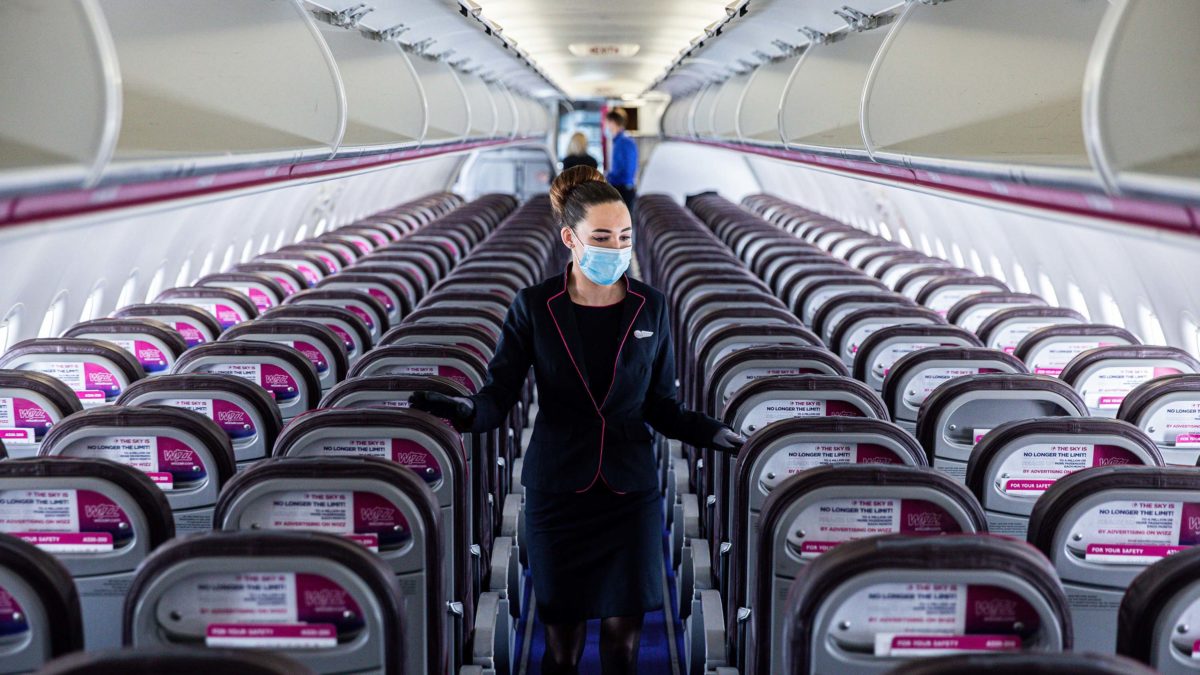 A member of the cabin crew wearing a protective face mask checks cabin seating ahead of the flight on-board a passenger aircraft operated by Wizz Air Holdings Plc at Liszt Ferenc airport in Budapest, Hungary, on Monday, May 25, 2020. Wizz Air is plotting a major expansion at London Gatwick airport as rival carriers pull back, paving the way for the Hungarian low-cost carrier to emerge from the travel downturn with a bigger presence in the worlds busiest city for passenger traffic. Photographer: Akos Stiller/Bloomberg via Getty Images

Ten aviation companies are to test safety measures proposed by the European Union Aviation Safety Agency (EASA) to prevent the spread of Covid-19, as airports and airlines reopen following the pandemic.

EasyJet, Wizz Air and Paris’s Charles de Gaulle airport are among the airlines and airports to have signed up to the health and safety guidelines written by EASA and the European Centre for Disease Prevention and Control.

The guidelines suggest observing social distancing wherever possible, wearing a medical face mask from the moment of arriving at an airport until the end of the journey, and frequent hand-washing. Additionally, only passengers with a ticket for travel will be allowed into terminal buildings.

However, the guidelines do not require airlines to enforce social distancing onboard or to remove the middle seat.

Passengers are encouraged not to travel if they are suffering from any coronavirus-related symptoms such as fever, cough, sudden loss of smell or shortness of breath.

Airlines for Europe, an airline trade association, insisted earlier in May that as the majority of aircraft are fitted with efficient air filters, “the air in the cabin is comparable with the sterile environment of a hospital operating theater.”

The group, which normally flies 720 million passengers a year, argues that removing the middle seat to aid social distancing “is unnecessary and ineffective as a further protective measure” and “not viable for the air transport industry.”

Brussels Airport, which is also participating in the safety trial, is already installing curb-side thermal cameras outside its terminal building to detect passengers with a high temperature or anyone who is not wearing a face mask.

In a statement, Brussels Airport CEO Arnaud Feist said the airport was “preparing actively for an expected increase in passenger traffic as soon as intra-European borders will open up again. Systematic body temperature controls of the passengers will be set up as from 15 June.”

The airport has also reorganized the way travelers queue inside the check-in and security areas and increased the frequency of cleaning. It is using UV sanitising technology to clean trolleys as well as deploying disinfectant-equipped robots to clean the floors.