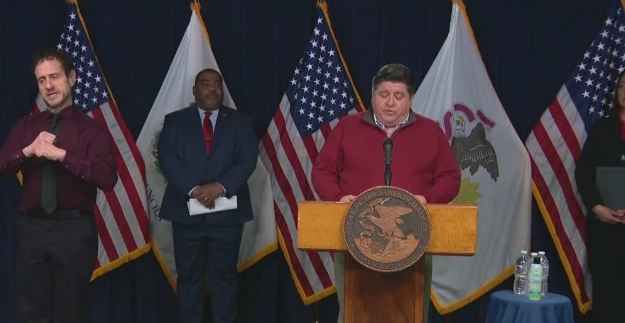 The total number of confirmed cases now amounts to 10,357.

Ezike pleaded with everyone to continue staying home.

“This will help Illinois flatten the curve, but we all must be willing to do this,” Ezike said.

She said kids planning meetups with the promise of social distance can easily fall apart when someone shows the group something on their phone and four or five people circle up.

She said gestures such as buying groceries for someone and leaving them at a doorstep are encouraged, but “the gesture of touching someone else, that’s now what we want at this time. We can defer those moves now.”

Also Saturday, Illinois Gov. JB Pritzker addressed the issue of protecting the health and safety of state employees – particularly frontline workers who deal with vulnerable populations in the Department of Human Services, the Department of Veterans Affairs, and the Department of Children and Family Services.

Like many businesses, many state agencies have directed employees to work from home, Pritzker said. But some do not have that option.

“They’re still doing their jobs every day, spending hours away from their own families to care for some of our most vulnerable residents,” Pritzker said.

“All of our actions have centered around a singular focus – protecting our most vulnerable residents and doing everything possible for their health and their wellness,” Pritzker said.

The department has seen one positive COVID-19 case at its Prince Home in Manteno, which provides housing and supportive services for homeless veterans. The patient is an employee and is recovering at home.

Department of Children and Family Services Director Marc Smith said as of Saturday, 88 percent of the department’s workforce no longer reports to the office many workers have been taking calls from home and using phone and video calls in place of in-person contacts.

“However, the reality is to ensure that we are keeping children safe, some in-person contact must continue.,” Smith said.

Thus, protective gear is being given to frontline staff and the staff of private partners, including more than 400,000 protective gloves and more than 15,000 masks, along with disinfectant and cleaning supplies. But Smith noted there is a shortage of child-size masks.

The DCFS is also extending services for any youth who has aged out of the system in the past six months.

Department of Human Services Secretary Grace Hou said as of March 12, health screenings – including temperature checks – have been instituted for all staff at every shift change. All group activities and field trips have been canceled, and residents of DHS facilities have their vitals taken twice a day.

The DHS has also closed about 13 public-facing facilities.

“We know that these cases are agonizing for families and for our staff as we continue to be as responsive and transparent as possible for everyone involved,’ Hou said.

Hou also noted that with the economic fallout from the coronavirus crisis, cases referred to the DHS have skyrocketed by more than 170 percent. She urged people to go to http://www.dhs.illinois.gov#healthishere for further information.

Worldwide, the number of confirmed coronavirus patients has soared above 1.2 million, with about one quarter of them in the U.S.

Seeing a border state like Iowa without a stay-at-home order is frustrating for Pritzker.

Iowa has about 700 cases of coronavirus, or less than a tenth of the number of Illinois cases.

“If you did a side-by-side comparison of what we are doing in Iowa and what other states are doing, they are much the same,” said Iowa Gov. Kim Reynolds. “Even those states that have implemented shelter in place orders have kept the majority of their businesses open, similar to our orders.”

But as CBS 2’s Mike Puccinelli reported, Pritzker said is the federal government that really should have issued a mandate.

Pritzker also argued that in a time of national emergency, he said President Donald Trump should have used the Defense Production Act to force companies to build personal protective equipment for the states.

As an example, he brought up the N95 mask. He said the state has received about 500,000 of the masks, but ordered 7 million.

“We are at war, and we have the ability to produce PPE in this country and distribute it,” Pritzker said. “But the White House has failed to use the Defense Production Act to do this to help us across the country.”

As for people who continue to ignore the stay-at-home order that has now been in effect for two weeks and will be for at least four more, the governor was not pulling his rhetorical punches.

“All I can say is those people are either not paying attention to the news, or they’re stupid. That’s all I can say,” Pritzker said. “I mean, there’s no reason why somebody should be ignoring this. You could be giving it to your own family, and you could get it yourself.”

The governor also said you should wear a mask if you have one, and continue to practice social distancing – especially as we head toward the middle of the month, when the number of cases in Illinois could start to peak.