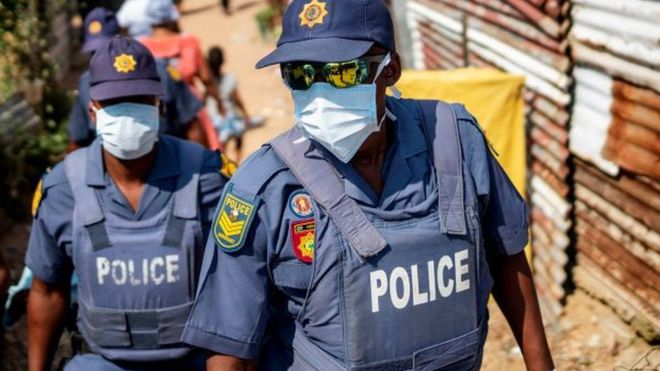 “The night Cyril Ramaphosa became a wartime president” is how a leading columnist for South Africa’s News24 website described the South African leader’s decision to impose a nationwide lockdown to defeat coronavirus.

The three-week lockdown, which started just after midnight, is unprecedented.

It is the first time since South Africa became a democracy in 1994 that a president had stripped away the most basic freedoms of citizens – to walk, to shop, to socialise and to congregate for prayer without hindrance.

“The law is that you stay at home. The exception is for survival: food [and] health, with security forces making sure that the law is enforced,” government minister, Nkosazana Dlamini-Zuma, said. 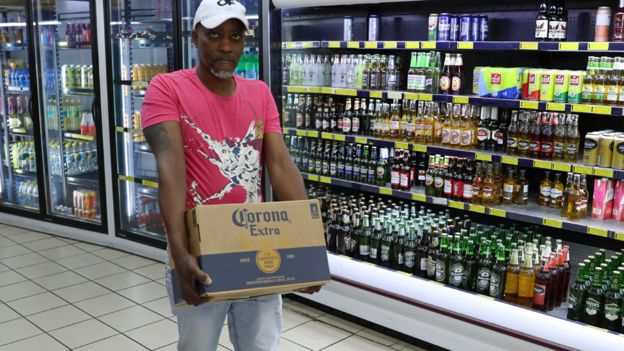 The government has even banned the sale of alcohol and cigarettes, as well as jogging or walking dogs, during the lockdown – warning that offenders risked being prosecuted, and either fined or jailed.

This goes further than anything that the apartheid regime threw at the country’s population during its almost five decade-long oppressive rule.

But the hard-won freedoms that South Africans attained after defeating apartheid have been lost a mere 25 years later as they – like many other nations in the world – cede their rights to governments to fight what UK Prime Minister Boris Johnson has called an “invisible enemy”. 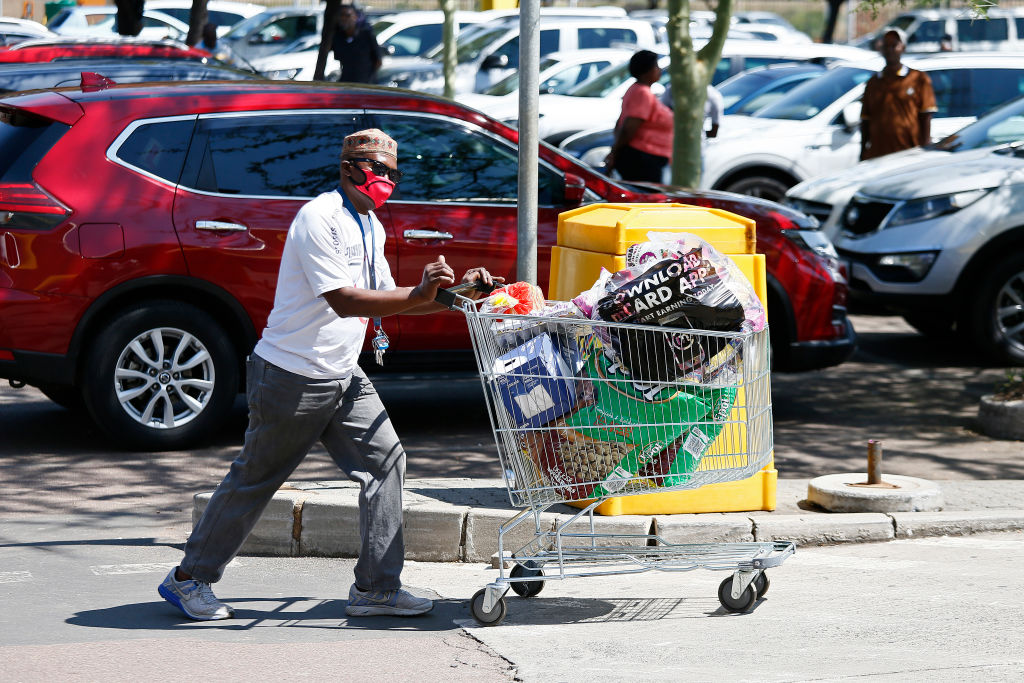 But two weeks ago, the country’s Defence Minister, Oppah Muchinguri-Kashiri, thought her nation’s borders were impenetrable, claiming that the virus was the enemy of powerful Western states – not a poor African nation under US sanctions for its human rights record.

“Coronavirus is the work of God punishing countries that imposed sanctions on us. They are now keeping indoors. Their economies are screaming just like they did to ours. Trump should know that he is not God,” she said at a rally of the ruling Zanu-PF party on 14 March. The minister ignored the fact that the virus was first detected in China where it has killed more than 2,000.

Her hubris was short-lived: the virus has hit Zimbabwe, claiming as its first victim, 30-year-old broadcaster and filmmaker, Zororo Makamba earlier this week.

“Pandemics of this kind have a scientific explanation and knows no boundary, and like any other natural phenomenon cannot be blamed on anyone,” President Mnangagwa said, effectively rebuking his defence minister for trying to politicise the global health crisis.

He banned all gatherings, shut schools and set aside three hospitals as quarantine centres as part of what are now familiar measures introduced in other parts of the world to prevent the spread of the virus.

With its economy in ruins and the government struggling to pay its bills, Zimbabwe is in no position to cope with a major outbreak, as many of its health centres do not have basic equipment, medicine, staff or a regular electricity supply.

Draconian measures
Fearing that Zimbabweans will flee to its territory for treatment, South Africa’s government has decided to complete the construction of a fence along the main border of the two nations within the next few weeks. 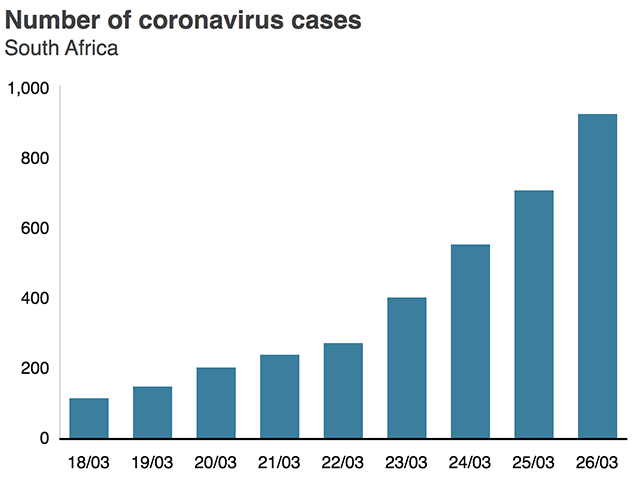 “At the border post now, you’ve got health inspectors and you’ve got environmental professionals and they are doing the testing and screening at the border. But if somebody just walks over the border, there are no such facilities,” South Africa’s Public Works Minister Patricia de Lille said.

The curbing of illegal migration has been a long-standing objective of Mr Ramaphosa’s government.

It has now used the special powers it took for itself after declaring the virus a national disaster to build the 1.8m (6ft) high fence quickly.

Mr Ramaphosa clearly believes – like many other world leaders – that draconian measures are needed to defeat the virus.

“Without decisive action, the number of people infected will rapidly increase from a few hundred to tens of thousands, and within a few weeks, to hundreds of thousands,” he warned, when announcing the lockdown.

“This is extremely dangerous for a population like ours, with a large number of people with suppressed immunity because of HIV and TB, and high levels of poverty and malnutrition,” he added.

‘We’d rather die of hunger’
Rwanda – with a population of about 12 million – is the only other sub-Sahara African state to impose a lockdown.

It came into force on Sunday, with police setting up checkpoints across the country to ensure that people comply – something that they have been mostly doing with streets in the capital, Kigali, deserted.

Police say they shot dead two men in the south of the country after they got involved in a fight with them but denied the incident was linked to the lockdown.

As for the economic consequences of the two-week restrictions, it has been devastating, especially for casual labourers who live hand-to-mouth.

“We’d rather die of the virus than hunger,” one man said.

Ignoring the risk of spreading the virus in a country with one of Africa’s highest population densities, some poor people are said to have surreptitiously left the capital, walking long distances – sometimes more than 100km (62 miles) – to reach their home villages where they believe they will at least get food from the farms and vegetable patches of their families.

Although the government has promised to give financial help to people and has set fixed prices for basic food items, their plight highlights the dangers posed by a lockdown – that it could worsen hunger and poverty, especially if it is extended.

In South Africa – the continent’s most industrialised nation – Mr Ramaphosa announced a series of measures to cushion the economic effects of the lockdown.

These include the establishment of a solidarity fund, to which two of the country’s wealthiest families – the Oppenheimers and Ruperts – have already pledged 1bn rand ($58m; £48m) each to help small businesses.

Mr Ramaphosa has also ordered the deployment of the army onto the streets to help police ensure that the population of almost 60 million stays at home for the next three weeks.

Attempted murder charge
As a warning shot to anyone thinking defying the order, police on Wednesday revealed that a businessman had been arrested for disobeying a doctor’s instruction to self-quarantine for 14 days.

The 52-year-old was detained in hospital, and charged with attempted murder for endangering the lives of almost 30 people he had interacted with subsequent to the doctor’s instruction, police said.

It was a reminder of the unprecedented powers that the government had taken for itself and the security forces – without parliamentary approval – to fight the “invisible enemy”.

Against this backdrop, Chief Justice Mogoeng Mogoeng has told judges to be on standby for possible legal challenges against the government in a nation known to be litigious, suspicious and even defiant of authority.

A possible sign of how judges would rule came last week, when the health department obtained a court order to forcibly put a man in quarantine after he walked out of a hospital, refusing to be tested despite the fact that his wife and daughter had been diagnosed with Covid-19, the respiratory illness caused by the virus.

The case highlighted the fact that ignorance and complacency are probably the biggest obstacles in efforts to combat the spread of the virus.

With the largest number of cases of coronavirus and introducing some of the most stringent measures to deal with it, South Africa has now become a test case for the rest of the continent to see if it is the model to follow. 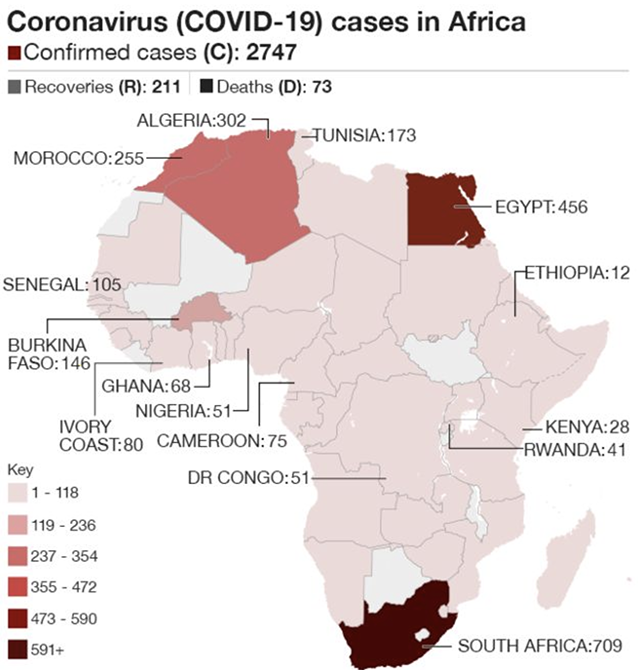