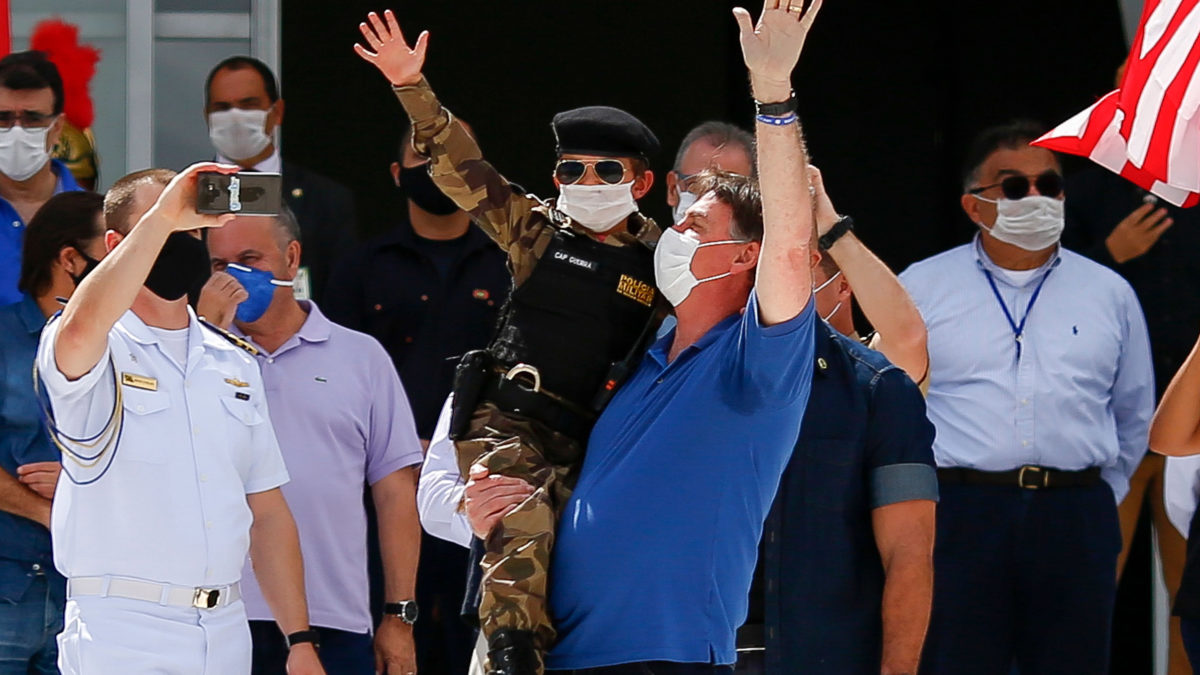 Brazilian President Jair Bolsonaro holds a child in a military costume as they both wave during a rally in Brasilia on May 17, 2020, amid the novel coronavirus pandemic. - Brazil's COVID-19 death toll passed 15,000 on Saturday, official data showed, while its number of infections topped 230,000, making it the country with the fourth-highest number of cases in the world. (Photo by Sergio LIMA / AFP) (Photo by SERGIO LIMA/AFP via Getty Images)

Brazilian President Jair Bolsonaro joined a large rally outside his official residence, the Alvorada Palace, in Brasilia on Sunday to greet supporters, according to video posted on his official social media accounts.

Video streamed on Bolsonaro’s YouTube page showed him wearing a face mask while walking close to a large crowd. At least four ministers accompanied Bolsonaro as he shook hands with those in the crowd and even carried several children in his arms.

Bolsonaro addressed the media during the rally, saying “it is very gratifying, honorable for me, for my cabinet, to receive a demonstration of support in this sense.”

“We will be able to change the fate of Brazil, despite this crisis that has been affecting the whole world,” Bolsonaro added.

Shortly after the rally, Bolsonaro welcomed a group of men wearing military outfits at the Presidential Palace. The men said they were paratroopers from the Brazilian army, and wanted to show support for Bolsonaro.

The group said a prayer for Brazil, at one point shouting “Bolsonaro is us.” They also did several rounds of push-ups with the Brazilian President.

The demonstration took place just hours after Sao Paulo’s mayor, Bruno Covas, warned that his city’s health system is on the brink of collapse due to the coronavirus pandemic.

The country’s Ministry of Health has so far reported 241,080 confirmed cases of coronavirus with 16,118 deaths.

Brazil has the fourth-highest number of coronavirus cases in the world, according to data from Johns Hopkins University in the US. The latest spike in cases pushed Brazil’s count past Spain and Italy.