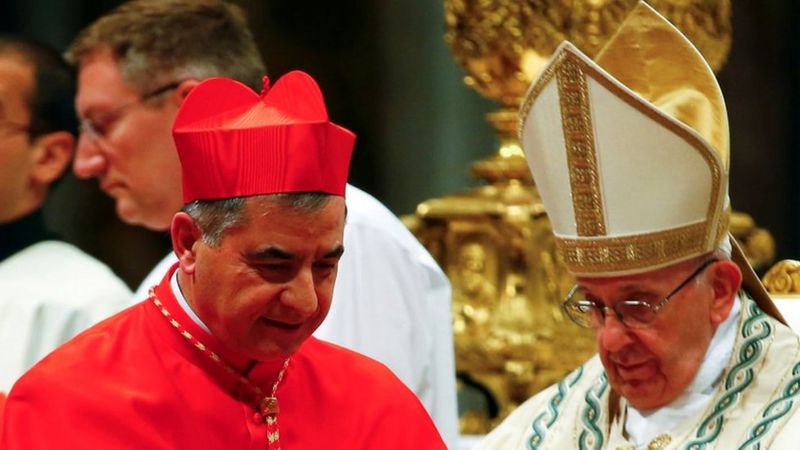 He previously worked as the second most senior official in the Vatican’s Secretariat of State.

Cardinal Becciu became involved in a controversial deal to buy a luxury London building with church funds as an investment. The deal has since been the subject of a financial investigation.

He denies any wrongdoing.

“The Holy Father accepted the resignation from the office of Prefect of the Congregation for the Causes of Saints and from the rights connected to the Cardinalate, presented by His Eminence Cardinal Giovanni Angelo Becciu,” a statement from the Holy See said.

For six years, Cardinal Becciu had the role of Substitute for General Affairs in the Secretariat of State, when he met the Pope daily and was one of his most trusted aides.

It was during his time in that role that he was linked to the property deal. The purchase of the luxury building in London’s Sloane Avenue was paid for with offshore funds and companies.

Five members of staff were suspended last year following a raid of the offices of the Secretariat last year. Vatican police officers seized documents and computers.

“An investment was made on a building. It was good and opportune occasion, which many people envy us for today,” he said in February.

Cardinal Becciu, who was named a cardinal in 2018, will keep the title despite his resignation from the congregation. However he will not be able to vote for the next Pope.

The last cardinal to give up his right to vote for a new Pope was Cardinal Keith O’Brien who resigned in 2013 amid a sex scandal.

Coronavirus: Life in Rome under lockdown