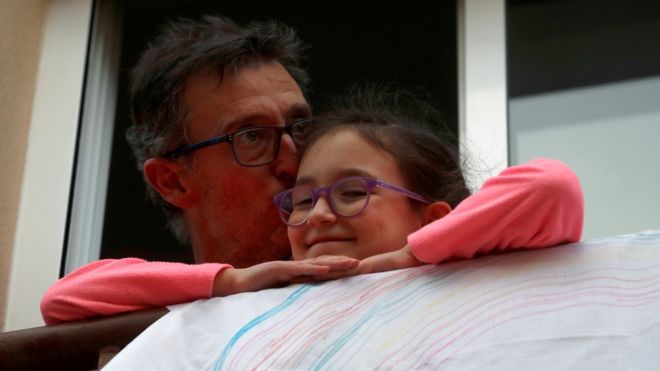 Spanish children have been kept at home since 14 March, under strict measures to curb the spread of Covid-19.

Now Prime Minister Pedro Sánchez aims to relax the rule on 27 April so they can “get some fresh air”.

Barcelona Mayor Ada Colau, who has young children herself, this week pleaded with the government to allow children outside.

Spain has seen more than 20,000 deaths since the start of the pandemic and almost 200,000 reported cases.

In a televised briefing on Saturday evening, Mr Sánchez said Spain had left behind “the most extreme moments and contained the brutal onslaught of the pandemic”.

But he said he would ask parliament to extend Spain’s state of alarm to 9 May as the achievements made were “still insufficient and above all fragile” and could not be jeopardised by “hasty decisions”.

Spain’s latest coronavirus figures appear to confirm the virus’s downward curve, given that at one point earlier this month the country was recording nearly 1,000 deaths each day.

Also, the number of daily new infections appears to have stabilised. Although the health ministry has warned that weekend figures can be misleading because of a delay by local authorities in reporting data, the apparently improving picture will further encourage calls for the lifting of certain restrictions.

There has been growing social and political pressure on Prime Minister Sánchez to allow children, in particular, to go outside. Opposition leader Pablo Casado tweeted that “these little heroes are climbing the walls” after more than a month of not being allowed out beyond the confines of their homes.

However, a poll published by 40dB for El País reported that 59% of those asked thought that the lockdown should be maintained as it is for the time being.

Another 410 deaths were reported on Sunday – fewer than Saturday. The latest toll is well down from the peak of the pandemic, and the government allowed some non-essential workers to resume construction and manufacturing last Monday.

However, the main lockdown measures remain in place, with adults only allowed out to visit food shops and pharmacies or work considered essential. Children have been barred from going outside their homes completely.

Some of the biggest names in music, including Lady Gaga, Paul McCartney and Billie Eilish, have joined forces to celebrate healthcare workers in a globally televised concert
Donald Trump has chided some Democrat state governors, saying they were getting carried away with imposing too many coronavirus restrictions
The world’s Orthodox Christians are celebrating Easter – the most important festival in their calendar – amid a series of restrictions and bans
Israel has announced that it will begin a gradual easing of its strict coronavirus lockdown
Iran’s Supreme Leader Ayatollah Ali Khamenei has said that Muslims are exempted from fasting during the holy month of Ramadan – due to start this week – if they feel it would pose a serious threat to their health

Spain’s eight million children have already spent five weeks in confinement and there has been growing unease at the risk to their health. 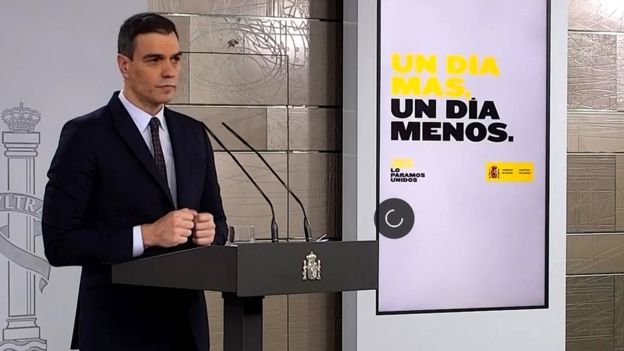 The Spanish Children’s Rights Coalition has warned of mental and physical health problems for children as a result of such measures and called for boys and girls to be allowed outside to play and do some physical activity.

“These children need to get out,” the Barcelona mayor demanded. “Wait no more: Free our children!”

Other countries such as Denmark have begun opening up schools for under-11s while Norway is set to reopen kindergartens on Monday. Germany will reopen some schools on 4 May although the most populous state will begin opening up from Monday.

Sweden has kept its schools open throughout the crisis. However, none of these countries has been as badly hit by the virus as Spain. 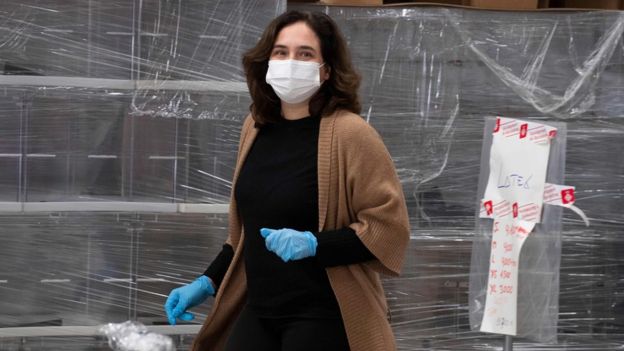 From a week on Monday, the prime minister said, children will be allowed out but he added that he had not yet decided how it would be organised and it would have to be “limited and subject to conditions to avoid contagion”.

“The proposal is that starting from 27 April they have the opportunity to leave their homes and for a while in the day they get to enjoy fresh air,” he said, without specifying for how long that would be.

Mr Sánchez said he would discuss the details of easing the restrictions with regional leaders on Sunday and following the advice of paediatricians. Reports said the relaxation would only apply to under-12s but that has not been confirmed.

He accepted that many children were living in homes of 40-50 sq m (430-540 sq ft) in size and that the youngest would be allowed out in the street.

Biden campaign retires for the day at 9 a.m. as election looms